Despite several visits by the Prime Ministers of India and Nepal, it seems the relationship between the two countries is still stressed. Nepal is agressively signing deals with China bringing 'string of pearls' knocking at India's door. 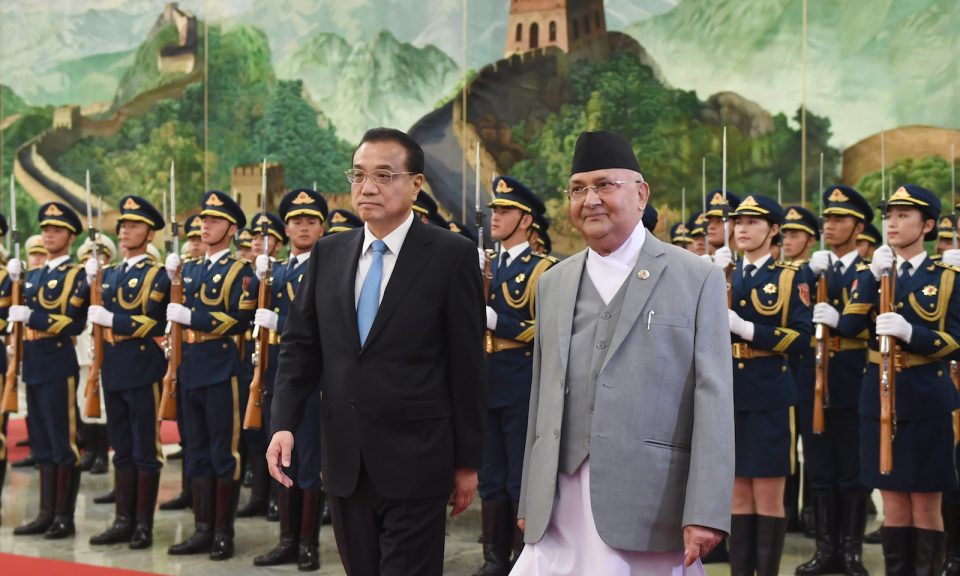 It was a well-planned manoeuvre as China and Nepal signed an agreement which will give Nepal access to Chinese ports enabling the connectivity of the landlocked country with China and other south Asian countries like Japan and Korea.

The two governments signed the protocol after a marathon meeting on Thursday night. This structure had been conceived between the two countries when Nepal Prime Minister K P Oli visited China in March 2016 in the wake of economic blockade by India.

The formalisation of the agreement allows transit of goods from other countries to Nepal via all of China's ports, including Tianjin, Shenzhen, Lianyungang, Zhanjiang and dry ports that include Lhanzin, Lhasa and Shigatse.

The ties between India-Nepal began deteriorating when the Indian Prime Minister Modi decided not to lift the blockade of goods in support of the Indian origin Madhesi's that were demanding equal constitutional rights in Nepal.

Nepal rejects Modi's offer to be part of a military exercise

When Prime Minister Narendra Modi visited Nepal, he invited Nepal to take part in the 4th BIMSTEC summit. Modi invited the delegation of the country's military to participate in the BIMSTEC exercise to be held in India. BIMSTEC, or the Bay of Bengal Initiative for Multi-Sectoral Technical and Economic Cooperation, is a grouping with seven member countries - Bangladesh, India, Myanmar, Sri Lanka, Thailand, Bhutan and Nepal. The exercise is to be held in Pune between 10 and 16 September. This was supposed to be the first BIMSTEC drill.

Nepal's foreign minister rejecting India's proposal has said that the country's military will not take part in the drill. Talking about India's initiative to hold the drill, he said, "India was free to float the agenda, but we did not endorse it".

Nepal's national defence force, which was all set to send a platoon size delegation to participate in the drill, will now be represented at the event by three observers.

After the blockade, Nepal strategized and decided to go full steam in joining the BRI project, even in the face of strong opposition from India. It was completely clear that Nepalese leadership thought it that it was best to rely on China to develop alternative trading routes through Tibet.

At present overland trade to and from Nepal is routed mainly through Kolkata which takes up to three months, owing to highly corrupt officials on both the Nepal and Indian customs.

Xinhua the Chinese news agency reported that China had "contributed to around 87 per cent of foreign direct investment (FDI) commitments received by Nepal during the first 10 months of the fiscal year that began in mid-July 2017."

Nepal has great potential to grow as an economy. With the right infrastructure, Nepal has the potential to generate massive amounts of hydroelectric power for its fast-growing neighbours, because of its mega-rivers.

India's lack of a swift negotiation between the Madhesis and the hill people started the deterioration of the relationship. Foreign secretary Vijay Gokhale in a Parliamentary Standing Committee on External Affairs at a hearing on February 16 had said that China was "making headway" in infrastructure projects in South Asia and its "far greater" capacity to take up these undertakings are a "constant concern" for India. His remarks were reproduced in the latest report of the standing committee on the Ministry Of External Affairs' budget.

The ministry had said in the report that India will have to deal with a far more aggressive Chinese foreign policy.

A section of the Indian government that needs to look at India's foreign policy must concentrate on its job. The home ministry needs to do its job to stop the chaos that is brewing in India with all the communal tensions. India's defacto External affairs minister Narendra Modi who possibly does more outreach than the real External Affairs Minister Sushma Swaraj will have to bring on board the US and Japan to keep the Chinese at bay. But this is going to take some manoeuvring as India approaches the 2019 election, the government has to deal with a brewing leadership challenge from people within its own party. A senior party member of BJP Subramaniam Swamy was seen taking a dig at the Minister of Finance Arun Jaitley of aiding businessman Mallya in escaping from India before paying off his loans to the banks.