The existing forms of uncertainty in Venezuela have been exacerbated by the new President row. Two people claim to be the President of the country calling each other illegitimate. 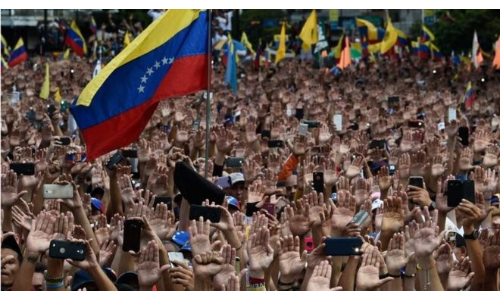 I Am The New President

Juan Guaido has declared himself as the interim president of the country. The 53-year-old from Vargas is a member of Centrist Social Democratic Populist Will Party. He has been vocal against alleged corruption under previous administration and has also taken part in active protests. During one such procession he was shot by a rubber bullet. He is the leader of the National Assembly of Venezuela. Guaido, accuses Nicolas Maduro - the President since 2013 - of unfair electoral practices and winning by deceit, therefore, he has the reason to dethrone.

I Am The Real President

Nicolas Maduro, who has been ousted by Guaido claims to be the leader of the people as he 'won the election'. He has been the president of Venezuela since 2013. Before ascending to the highest post, he served under President Hugo Chavez and was considered his close confidante. In 2015, his party faced a defeat in the parliamentary elections which questioned his popularity and challenged the grip over power. Thereafter, he has been accused of manoeuvrings to hold power where the elections have been in the 'name only'. Ousted President Maduro enjoys the support of many government bodies and powerful organizations including the Supreme Court. He is crying a foul play and calling for the people to stand against the enemies of Venezuela.

Venezuela has been going through economic crisis since 2000s. In the days of Hugo Chavez, the country saw a huge surge in poverty and inflation. The unemployment rate soared and people lacked basic facilities. Nicolas Maduro's rule could not do any better as the housing crisis to food crisis was apparent in the country. A combination of populism and rhetoric of development did not work. The socio-economic crisis saw hundreds of people being killed which precipitated a strong reaction against the government.

Global response to the Venezuelan crisis has not been of much surprise to many. United States immediately recognised the new claimant – Juan Guiado – as the legitimate President of the country. US's stand has been echoed by countries like Canada and Brazil. It is important to note that in 2017, President Maduro was slapped with sanctions by US accusing him of dictatorship and barring him from entering the country. This is the reason that President Trump's support for the new President is not a shocker. On the other hand countries like Russia, China, Turkey – who has always challenged USA – have raised their concerns about 'interfering into a country's internal matter'.