Trump Poised to Become First President in US History to be Impeached Twice; Vote Expected Wednesday 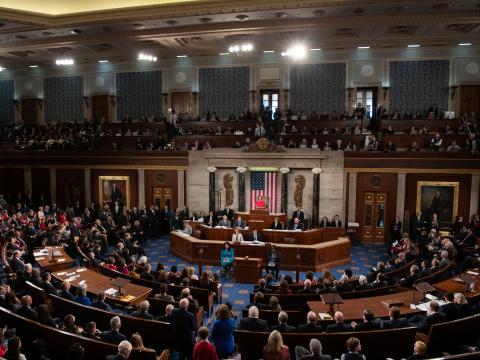 UNITED STATES. Washington, DC: The House is poised to pass Articles of Impeachment under "incitement of insurrection" against President Trump as a response to the coup d'état attempt on 6 January. Americans witnessed Trump and many of his acolytes including his personal lawyer, Rudy Giuliani, and a handful of Republican lawmakers, stoke the flames of those gathered in a sanctioned rally in front of the White House. In a fiery and combative 70 minute speech, Trump urged his followers to march to the Capitol Building where The House was certifying the results of the 2020 presidential election in which Trump was declared the loser. Trump's aggrieved speech included attacks on the media, continued lies that the election was rigged, anger that "his" appointees and the Vice President himself were weak for not breaking the law on his behalf.

Most significantly, he urged those at the rally to take direct action: "We will never give up. We will never concede, it doesn't happen. You don't concede when there's theft involved…We're supposed to protect our country, support our country, support our constitution and protect our constitution…But just remember this. You're stronger, you're smarter. You've got more going than anybody, and they try and demean everybody having to do with us, and you're the real people. You're the people that built this nation. We're going [sic] walk down to the Capitol, and we're going to cheer on our brave senators, and congressmen and women. We're probably not going to be cheering so much for some of them because you'll never take back our country with weakness. You have to show strength, and you have to be strong."

After pleads for Vice President Pence to impose the 25th Amendment to relieve the President of his duties have been ignored, the House has moved forward with the only tool they have at hand: impeachment.

The days following the storming of the Capitol have left lawmakers wringing their hands with Pence's lack of response. Critics are questioning the value of impeachment with only 9 days remaining before President-elect Joe Biden assumes office on the 20th.

The case for impeachment

Impeachment is a cumbersome process and requires cooperation with the Senate which, until the 20th, is still in Republican hands. Senate Majority Leader Mitch McConnell has indicated no urgency to begin the trial proceedings until the Senate reconvenes on the 19th.

Even through impeachment, provided Trump is convicted by the Senate will not remove the President in the next 9 days, there is agreement within the House that the proceedings are worthwhile. First, Trump would be the only president in American history to have two impeachments attached to his legacy. Second, The Congress believes that they must exercise the only lever of power at their disposal to send a message, not only to Trump, but to any official who thinks they are above the law. Finally, and perhaps, most significantly, impeachment proceedings would ultimately conclude under the Biden administration, significantly in a 50/50 Senate split with Vice President Harris as the tie-breaking vote. The result of conviction by the Senate would have serious consequences on Trump's future.

Trump would be permanently banned from holding federal office. In addition to taking away any future rise to power, Trump would lose all Secret Service protection, his federal pension, and any other benefits granted to former presidents, a savings that amounts to well more than $1 million annually.

Arguments against impeachment unlikely to sway a determined house

Opponents of impeachment express a range of opinions. Some argue that we need to let the country heal and move on and should let Trump leave office in 9 days. Others feel that impeachment would be a distraction for the Biden administration, which is focused on the economic and healthcare fallout of the COVID-19 pandemic.

With demands for resignation being rebuffed by the President and urgings for Pence to initiate the 25th Amendment being rebuked, the Congress is left with impeachment or inaction. With the majority of Representatives supporting impeachment, inaction is not no longer an option.

I hold a graduate degree in humanistic psychology. Passionate about promoting the conditions necessary for a fair and just society, I write for, about, and with those who are on the front lines of democracy.