The nation's daughter yearns for justice

The Supreme court upholds death sentence of the convicts of Nirbhaya gang rape. 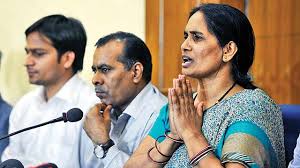 To the judgement which received applauds from the visitor's gallery, to the incident which shook the country together, the one which sparked the emotion of empathy throughout the world. The one which brought all of us together. Today is the day, when it reaches it's apex and the rightful happens. The Supreme Court pronounced it's verdict today with a three judge bench comprising of Chief Justice Dipak Misra and justices R Banumathi and Ashok Bhushan. The judgement was delivered on the pleas of Mukesh (29), Pawan Gupta (22) and Vinay Sharma (23). The fourth convict Akshay Kumar Singh (31) did not go for a review petition. The Supreme Court had previously announced death penalty for all the four accused in May, 2017.

The Supreme court upheld death sentence for the three convicts. The condemned prisoners are now left with option of filing a curvative plea in the Supreme Court and mercy petition in before the President to avoid death.

December 16, 2012, led us to think as a country about the direction we were heading. A 23 year old paramedic student was gangraped by six men on the roads of South Delhi. She was severely assaulted with an iron rod and thrown in an unconscious state on the road side. It was a night of shame for the capital as she lay there helpless with people just acting like silent spectators.

Out of the six, one of the chief accused Ram Singh committed suicide in the Tihar jail and the teenage convict was sent to a juvenile home, somewhere in North Delhi. The convict is now breathing in fresh air and works at a roadside eatery somewhere in South India, completely unaffected by all of this.

According to an article by Economic Times, "The casual manner with which she was treated and the devilish manner in which they played with her identity and dignity is humanly inconceivable. It sounds like a story from a different world where humanity has been treated with irreverence," the bench comprising Justices Dipak Misra, R Banumathi and Ashok Bhushan said.

"The appetite for sex, the hunger for violence, the position of the empowered and the attitude of perversity, to say the least, are bound to shock the collective conscience which knows not what to do", the court said. Justice R Banumathi expressed deep concern over the rising crime against women despite rising literacy levels. "Offences against women are not a women's issue alone, but human rights issue," she said.

Taking the NCRC data into account she threw light on the increasing crime against women in India. The only remedy to this disease is making gender equality one of the morals of living. Educating our future how a No actually goes by its meaning and is not a sign of shyness. Its already out there what are we trying to hide ourself from. It's high time we start talking about it, the world needs to listen to those silent whispers.