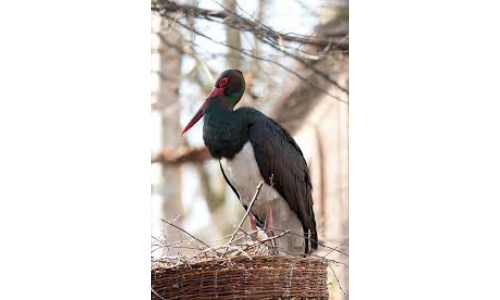 A stork was spotted days back with a plastic ring around its neck, leading to fears of him dying from starvation. However, it was rescued from Kherki Majra in Dhankot on Wednesday, June 13, 2018.

Two birdwatchers captured the bird after a four-kilometre chase near Najafgarh lake, 9-km from Gurugram, saving the stork's life.

The black-necked, male stork went hungry for five days because of the ring around its beak. Aged over two years, he is currently under observation at the Sultanpur National Park, and reported to be healthy.

A Delhi-based birdwatcher was the first to notice the stork's plight when he spotted it in the Basai wetlands on Friday. The fled towards Najafgarh before anybody could remove the plastic ring from its beak, Dr Ashok Khasa, a veterinary surgeon with the wildlife department, said, as reported by the Hindustan Times.

The image of the bird with its beak shut tight by a plastic ring had gone viral on social media over the past few days.