Report News
Home > World > Religion is going to take us down

Religion is going to take us down

When proceeding towards the future, such instances are the clutches we need to be free of. 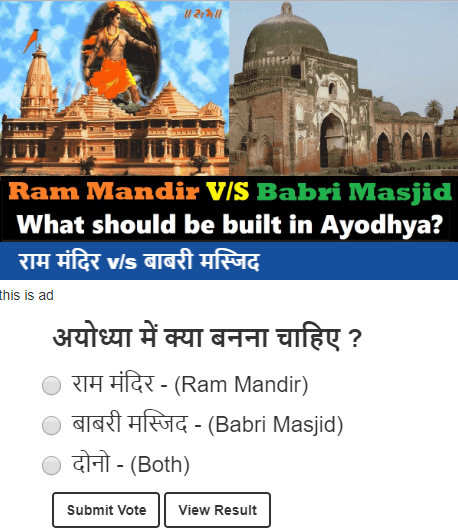 India the country widely known for it's secularity, the land popular for the coexistence of all the possible religions out there. We have a history of togetherness, strengthening our bond day by day. Incidences of people with different religious beliefs praying together isn't really a rare sight. One of the most landmark incidents that continue to raise questions on the unity of the nation, is the Ayodhya Land Dispute. The whole story dates back to the time when a riot in 1992 led to the demolishing of Babri Mosque.

The judgement however couldn't satisfy any party and both the parties individually filed an appeal in the Supreme Court. The BJP in its manifesto during the UP 2017 Elections cleared its stance on the issue, in words "will explore all possibilities within the purview of the Constitution to construct a Ram Mandir in Ayodhya".

The issue got real messy when in may this year, senior BJP leaders LK Advani, Union Minister Uma Bharti and Murli Manohar Joshi faced a court in Lucknow regarding the demolition case and were charged with criminal conspiracy. The situation requires us to be mature and not get mislead by the voices of extremists. Although the Archaeological Department of India has found strong evidence in the form of heavy architecture and relics that there was a Hindu religious Building.

Recently there is a link ( http://mandir-masjid-voting.in ) widely circulated which pleads people to vote so that Ram Mandir comes into existence. Such links not only incite negative feelings in the hearts of our innocent countrymen but also end up maligning their minds. Such initiatives are not only hostile in nature but also a hindrance in the attainment of India of our dreams.

It is the moment we need to put it all together and act sane, leaving it all to the people who are assigned to make a decision on it. Such frivolous attempts are not going to take us on the road to development and we are very well aware of our priorities.