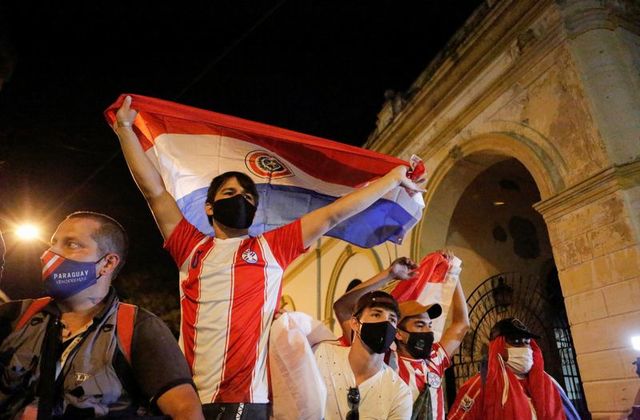 PARAGUAY. Asuncion: Sparks of rebellion were ignited on Mar. 3 in the capital as medical workers organized a general strike to raise awareness of the critical lack of medical supplies in the nation's hospitals. This quickly escalated into citywide protests by Friday, when a crowd gathered outside Congress in Asuncion, demanding the resignation of their president, Mario Abdo Benítez. A confrontation between police and protesters ensued, leaving 21 people injured.

Too little too late?

In response to the violent protests, which came with accusations of corruption and poorly managed healthcare resources, President Abdo Benitez demanded the resignation of his cabinet members, including Health Minister Julio Mazzoleni. Some Paraguayans have dismissed this action as little more than throwing a bone to a crowd that's hungry for justice. Many have committed to continuing the demonstrations across the country until President Abdo Benítez himself is either impeached or resigns.

In August of 2020, local protesters clashed with police in the city of Ciudad del Este over the proposed opening of the nation's land border with Brazil. The public outcry was swift since undersupplied hospitals were already struggling to keep their head above water in a sea of COVID-19 patients, while Brazil has one of the highest coronavirus infection rates in the world.

The explosive protests that happened in the capital on Friday have their origins in the initial wave of demonstrations that began last August. In the wake of those events, an Asuncion local stated, "Our country received literally millions of dollars in international aid during this pandemic. The hospitals and people have seen absolutely none of it."

"We used to feel very proud of our president," the source continued. "That has changed now. The people received no help and they bought nothing for our hospitals."

This candid statement became a harbinger of the recent protests. The lack of funding spent on critical medical supplies along with economic mismanagement by President Abdo Benítez's administration has led the proverbial chickens to come home to roost. For the moment, Paraguay's president and his protesters are in a deadlock over the future of their nation and its leadership.