We believe Google will, next year onwards, celebrate this day as the world's largest democracy's most democratic move – Decriminalisation of homosexuality and restoration of dignity and equality. 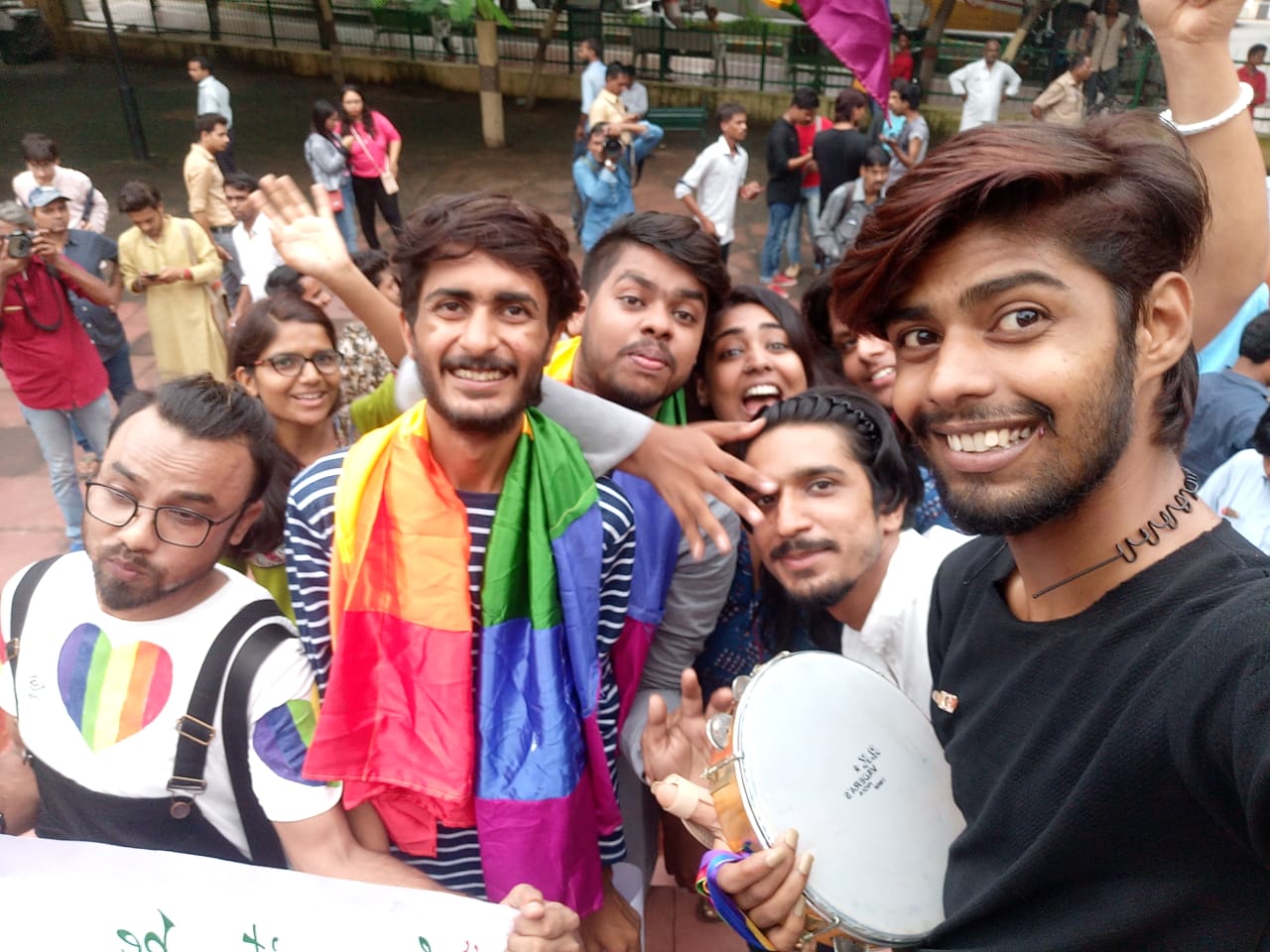 NEWS channels were never what they were today. Each celebrating all colours, each celebrating love, each celebrating humanity, and each feeling pride. You couldn't wipe that expression off at any point in time today, it totally eclipsed anything else today, so poignant was the mood. At DNL we wanted to reach out to our heroes that we featured before to capture their moments of exuberance and tears of triumph.

For one moment they were all gushing with sentiments and in the other a bit at a loss of words as the realization of the magnitude sunk it – yes it had happened, decriminalisation of homosexuality. It is the genesis of a long struggle, this time to gain acceptance in the society, the intellectual heads of which have taken an eternity to bring in the ruling – you could rue the time lost or you could cherish the moment gained.

My first interaction with Suhail Abbasi was during the screening of 'Ek Madhav Baug' at my organization as we were trying to create awareness for the LGBT+ community. Sitting in the background, as the artist brought tears to our eyes we saw it misting the eyes of the entire production team as well. The artist enacted the struggle Suhail and his team lived every day. Suhail expressed his feeling as 'elation', thankful to the spectacular ruling and said he was able to exhale on being declared as a 'first-class citizen'. 'It is just the beginning but it scrapped the long-standing stigma but it helps us gain a foot hold in a world of equality and justice,' said Suhail as he spared us a minute before he rushed in for a long-awaited cake cutting ceremony after a long day at the Apex court and then patiently speaking to the news channels, friends, supporters, reporters and family.

Jubilation is the mood in essaying Pride

Yadavendra Singh, from the Pahal Foundation, expressed his unconcealed jubilation as a 'Day of Pride' as he and his 'miniscule minority' was given 'full citizenship'. 'Previously the words 'equality', 'humanity' were hollow to us', he says. He was at the court and waited with baited breath as the clock tick-tocked ahead and then came the historic moment and no precedents of positive comments of the buildup to the verdict last month had prepared him for this progressive turn of events. Section 377 was not just scrapped, it was nullified vehemently and there was an apology issued. Supreme court had in July hinted at this eventuality but none were prepared for the thoughts and the sentiments invested on this case. The community stands vindicated as the CJI spoke of 'empowering all citizens' and declared sexuality as an individual's choice and biological attribute that was denied by an archaic rule. Yadavendra comments that this paves the road ahead for many more policies that will need to be corrected in light of the judgment today. He gives us a sneak preview to the road ahead where together we will tackle the issues of inheritance, right to adoption, hate crimes, ragging, right to matrimony and togetherness and work-place harassment amongst others.

The right to live with dignity has been recognized where intimacy and privacy have been upheld as every citizen's right and not just the prerogative of the majority. Constitutional morality has overruled societal morality which is forever ridden with an outmoded mindset.

For Rishu from Harmless Hugs the celebrations begun a couple of days in advance in anticipation, he shared his 'Queer Hugs' video with us and invited us to their Sixth Birthday Bash. 'There's nothing to restrain me today,' he implied as he looked upon yesterday and remembered the countless number of times he felt suppressed. The 'Bharat Band' that India awoke to today was obscured by this new awakening as the doors opened to hope and freedom. He dramatically staged the revelation of the verdict to his family as he sat his parents down and turned on the news channels, hoping that the social stigma that they have been long fighting will now be put to rest. 'This significant judgment has given the impetus that will help mould the social mentality and bring acceptance. LGBT rights needs to be determined and implemented, need to be advocated, need to be practiced,' says Rishu.

Yashwinder, Programme Manager at the Humsafar Trust shared his feeling of achievement with us, he said 'the ruling has enabled the society and it will now help them revisit their rights and the scope of this law and others directly impacted by it; like inheritance, matrimonial and civil rights.' Yash says that this verdict today gives them the window to undo the other wrongs that they have lived for an eternity. He adds, it is a Diwali of sorts, a homecoming albeit after an exile of more than 14 years.

Manoj Benjwal, also from the The Humsafar Trust, was definitely the hero of the day, not just the real one but the reel one as he rushed ahead for his 23rd interview of the day with three more lined up before the close of the day and before the commencement of celebration but he says it has been a celebration all day long. He recounts he had goosebumps and slight shivering as he sat in the court today. He relates that his childhood friend who has generally been critical of his motives and movements had turned a new leaf today and that is the radical change he hopes this verdict will bring to the masses.

He rejoiced as the legal battle has been won and prepares for the longer, the bigger battle – winning over the society that they are a part of. The verdict has tested them but sweet is the fruit of patience. He appeals that while we are waging ahead on globalization and progress in every field of life why should we be regressive when it comes to culture and humanity, should that not surpass everything else? He thanks all the advocates, activists and media especially who supported them and promoted their cause. Manoj reminisces that, fortunately, it wasn't a horrible struggle for him but the roadmap for the future will be decided by each community member's individual struggle. There are many issues that need to be addressed now which will be easier post today, amongst others he highlighted how privacy and intimacy can be a big issue for some while inheritance, adoption and matrimony might be for others.

This will now give greater rigor to their advocacy programmes for the society, for the governors of law and for the LGBT community itself on personal and legal rights. An hour later Manoj shared some snapshots of the celebration at India HIV Alliance at Greater Kailash, New Delhi.

A battle is won and the war begins as it opens the floodgates for other policies that have to be revisited in light of this historic judgment. For now, it's celebration of a victory that took ages in coming and we at DNL hope its lasts a while for its not every day that we celebrate equality as a nation.

What was the verdict about? Experimenting with life and presenting it as I see it.