“Without getting into the complicated geopolitics of the issue, what I can say is that for Kashmiris, Kashmir is the real, it can’t become the Indian government’s default reason to ignore what the Indian side is doing in Kashmir”- says Khushdeep Kaur Malhotra 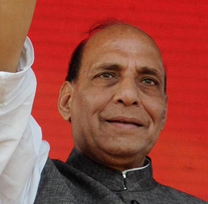 It's a slap in the face of Pakistan as the Union Home minister of India, Rajnath Singh, said if Pakistan was not able to handle the fight against terror in their country alone, then they could ask for help from India.

Targeting the opposition party in Parliament, "Congress", that was in power till 2014, Singh said that there has not been any major terrorist-related incident in India since Narendra Modi- led NDA government.

Addressing the press, Singh said - "Imran Khan had rightly said that Pakistan and India should move ahead from its past and nothing will be achieved in this blame game. But he referred to Kashmir as an issue. Let me tell you, Kashmir is and will remain an integral part of India. Our issue is terrorism. We have no problems in talks with Pakistan. But our main issue is terrorism."

The Union Minister asserted that India and its borders are safe, and also claimed that terrorism has reduced and the problem of naxalism is also fading away.

Naxal-related incidents have come down by 50-60 per cent in the last four years, he said, adding it has reduced from 90 districts to only 8-9 districts and that the problem will get eliminated in next three to five years. —PTI

Singh, not only addressed the issue of 'terrorism' in this press conference but also accused the Congress of creating a crisis of distrust in politics and claimed that there was a difference in their words and deeds. He also mentions that "I do not want to claim that terrorism has stopped, but no major terrorist incident has happened in the country in last four-and-a-half years" which basically meant that, ever since NDA government has come into power, there has not been a single terrorist attack. Not only this, but Singh also accuses the Congress party of suppressing the valour of Indian Army by not making "surgical strikes" public.

"Without getting into the complicated geopolitics of the issue, what I can say is that for Kashmiris, Kashmir is the real, it can't become the Indian government's default reason to ignore what the Indian side is doing in Kashmir"- Khushdeep Kaur Malhotra, a PhD Candidate from Temple University

The citizens of India are aware about the India-Pakistan tensions, as it is not a new upcoming thing, it has constantly existed and people learnt to live with it. Inspite of the Trump administration saying that 'India and Pakistan need to talk about their ongoing border tension' the recent cease fire along the line of control has led to another heated tension between India and Pakistan.