Muslims should vote candidates from their community: AIMIM chief

In a speech on Sunday, the AIMIM chief said that the Muslim community needs to vote candidates from their community to keep secularism alive. 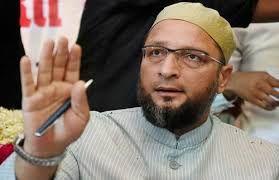 Asaduddin Owaisi, Chief of All India Majlis-e-Ittehadul Muslimeen (AIMIM) in a speech on Sunday conveyed that the Muslims need to vote the candidates from their communities.

According to ZEENEWS reports, "Qasim's death will make us think. But I am not asking you to shed tears. I beckon your conscience to rise. These people talking about secularism are the biggest dacoits ... biggest opportunists. They used Muslims for 70 years, threatened us, forced us to keep quiet," said the lawmaker from Hyderabad.

"Now you need to fight for your rights. If you want secularism to stay alive, then fight for yourself. Become a political force to reckon with. Make sure your (Muslim) contenders win," he added.

Owaisi also pointed out flaws under Modi rule by referring to Hapur lynching case. Owaisi said, "They used abusive language…throwing expletives at him…and how many arrests were made? Only two."

"It is happening under your rule…is this your idea of Sabka Saath, Sabka Vikas," attacked Owaisi. (ZEENEWS)

What is Hapur Lynching Case?

In this case a 45-year-old cattle trader, Qasim was lynched to death in Hapur, Uttar Pradesh and 65-year-old farmer Samiuddin was beaten by the crowd when he intervened to stop the brutality.

According to THE WIRE reports, the lynching of Qasim took place on June 18 at Bajhera Khurd village in Hapur district in broad daylight. Samiuddin, who was working on his farm, tried to intervene and stop the violence but the mob did not spare him too. Currently, he is the ICU of a hospital in Hapur. Videos of the violence have gone viral on social media. The videos clearly show that the attack was carried out as part of the infamous cow protection campaign run by the Hindu Right.

As Qasim was attacked, several minor boys, who formed the mob, kept abusing him for being a Muslim and indulging in cattle slaughter. But the FIR, which was lodged later, and bore the signature of one of Samiuddin's brothers as the complainant and one of Qasim's brothers as a witness, made the case as one of road rage.

On Monday, Owaisi had said that both the Bharatiya Janata Party (BJP) and the Congress were hankering for the Hindu vote bank. He added that the Muslims had always been deceived by saying 'you have a vote-bank'. (ZEENEWS)