Over the years, this valley has remained unexplored but now it is coming up as one of the most exotic places of Kashmir 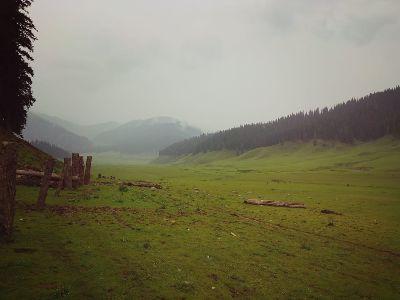 The Bangus Valley is the most beautiful spot which lies in Himalayan sub-valley of Kashmir. It is situated to the north of Kupwara district, in Jammu and Kashmir and is one of the relatively unexplored grasslands and unknown tourist hotspots. Pic credit Adnan Dar.

Jammu and Kashmir is the northern most state of India and has everything to offer to a nature-lover, from snow-capped mountains, gushing streams to lakes and lush green gardens. Every season in Kashmir has its own magnificence, but winters are a spectacular experience. The snow-capped mountains of Pir Panjal, Bangus Valley showcase the natural beauty of the state.

January to March is the best time to enjoy the winter beauty of Kashmir. This season is followed by spring when nature is in her finest moods, with almonds, cherries, apples, peaches, pears, pansies, Narcissus, daises etc. blossoming. The Bangus Valley is the most beautiful spot which lies in Himalayan sub-valley of Kashmir. It is situated to the north of Kupwara district, in Jammu and Kashmir and is one of the relatively unexplored grasslands and unknown tourist hotspots.

The valley lies at an altitude of around 10,000 ft above sea level, surrounded by Shamsbery ranges and Leepa valley. In the summers, one can find cattle and sheep grazing in the valley, which come from adjoining areas. The pasture lands of the area produce some of the finest grass in the State. The valley of Bangus has more than 100 meadows, the grass from which has nutritional and medicinal value.

Although largely neglected by the governments, in 2013 the state announced a package of Rs6.99 crores to develop the Bangus valley as a biosphere tourist destination and also to maintain its ecological balance and natural beauty.

Bangus valley forest lands fall within the jurisdiction of Department of forests, Government of Jammu and Kashmir. The main meadow at Bangus is presently being used as a grazing ground by shepherds. The main Bangus valley falls within Langet block while the smaller side valley known as Chota Bangus falls partially within the Rajwad Block. The valley also contains numerous narrow mountain passes leading into it, locally known as gallies. Some of the gallies are also temporarily inhabited by members of Gujjar Community.

Bangus Valley is a part of a unique eco-system with a distinct bio-diversity which needs to be conserved during any planned development in the area. The valley with its ideal setting will surely capture the hearts and the minds of all visitors to the region. The approach to Bangus, passing through various forest ranges provides ample opportunities for those in the search of adventure. The Valley and the inhabitants provide a unique opportunity to study and understand the cultural and biological diversity, and the ways and means by which within a given environment a balanced relationship between humans and their surroundings is maintained.

Bangus tourism is slow compared to other places because of the lack of transportation due to roads being in bad condition. Locals believe that tourism will increase if the government provides better connectivity.