Is an embellished face mask fashionable Delhi's next trend?

“There are several studies being done establishing the rise in medical problems amongst Delhites and while we wait for their conclusive statements I know the number of patients I am seeing in my OPD has grown two-folds from last year,” says Dr. Charu Goel 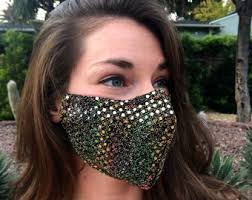 There is no no-smoking zone in the city, you cannot reserve a pollution-free table in your favourite restaurant, you cannot snuggle into your sterilised corner at your cosy home either. You can take a vacation but this land of grey, smothering skies is what you return to. You would be amongst the privileged 2% if you can make a permanent getaway from this maximized employment city. For the rest there is no getting away from it, the only resolution is dealing with it and dealing with it with utmost urgency. Delhi needs a better display of wisdom, better ownership and more intolerance to its own uncivil behaviour.

First of all, Diwali is a festival of lights not crackers, Lord Rama would probably have bunked right back into the jungles if he were frightened with a trail of crackers piercing his ears drums, the chemicals exploding in his nose and the smoke blurring and stinging your eyes. Apart from the fireworks that momentarily illuminate the sky, what do firecrackers do for you?

'Lax officials should be imprisoned' says the Supreme Court, how about lax citizens?

Delhi must have heaved a sigh of relief after yesterday's Supreme Court's strike on the centre and civic agencies for lack of action in pollution-related complaints. The court said that the local agencies have failed to address the grievances of the citizens and lax officials should be put behind bars.

Authorities report that about 749 pollution complaints were received through social media and over 3,000 through the "Sameer" app, a mobile application launched by the Central Pollution Control Board (CPCB) to enable people to register their complaints, between November 1 and 24.

This is a clear indication that the culprits and perpetrators are amongst us, are us and imprisoning a few government officials is not the resolution here, yes it might be a deterrent, but it's not going to formulate any policies or bring any relief. Delhi needs to know that ganging up against the authorities is not the solution today, the solution lies not in agitations and strikes and demonstrations. The solution lies in working on the issues that we are cognizant of and the solution that we can easily employ.

Is Delhi dating the doctors this year?

Do we need the government to tell us that we don't need to pollute our air more and should refrain from bursting crackers or driving pollution causing vehicles? Are you willing to expose your children and older people to the catharsis of the diseases that Delhi is already dealing with? Are you ready to spend the rest of your months post Diwali with your GP (general physician) or worse with your cardiologist, pulmonologist, ophthalmologist, and dermatologist?

And do we feel smart when we try to cheat the government because they didn't have the foresight to ban crackers for Bhai Dooj or Gurupurab or the wedding season in Delhi, which is a nuisance in more ways than one? Why is Delhi so flamboyant that it prizes its opulent display more than every breath it takes... what is the next fashion trend we are striving for – embellished air masks?

Have you drawn a monthly or annual estimate of your expenditure on medical consultations and medicines?

Have you grossed up your expenditure on air purifiers, oxygenating plants and air masks?

If that is a task, refer to the figures here-

Is house arrest the only option today?

We spoke to Dr. Charu Goel to know just how severe is the issue we are dealing with here? "There are several studies being done establishing the rise in medical problems amongst Delhites and while we wait for their conclusive statements I know the number of patients I am seeing in my OPD has grown two-folds from last year". 'The ongoing studies indicate a reduced life-expectancy by almost 10 years. There is a clear rising trend of asthma in children. There is an exponential increase in chronic obstructive air diseases, early onset of malignancies, innumerable cases of chest and respiratory tract infections, early onset of lung diseases and increased number of cardiac diseases.'

'In addition to the above, it is leading to life-style disorders for the diabetics and cardiac patients the most important form of treatment is exercising and they cannot venture out at most hours in Delhi. We are increasingly advising people and especially children to stay indoors and restrict outdoor movement but this confinement is not an option' she says. 'These restrictions lead to depression, morbidity, reduced output due to leave from work and schools. The severity can also be gauged from the fact that the current environmental situation could lead to genetic mutations of an unnatural and unwanted nature.'

Delhi needs to get its hands dirty – Green Vs Grey

Delhi needs to wake up to the need of the hour, there is a lot that needs to be done and there is a lot you can do starting with your neighbourhood. 'Plant a tree, plant a tree, plant a tree', you can never overdo this one and this offers the biggest protection against all threats to the city. Stubble burning is a bigger evil to tackle but you can stop garbage burning right outside your residential complex, there are laws against it, you can easily curb it. As an RWA, adopt the green belts outside your homes and ensure they are green and not marshy. Get your vehicular pollution free certificates today. Banish crackers from your celebrations, every 'bang' makes a resonant impact today. Adopt your city! Swacch Bharat is not an idyllic theory, not just a political gimmick, it is a pledge we need to take even if the authorities monger slogans about it.