A sanitation worker suffocated to death after allegedly falling in the sewer of a building which he had entered to clean in Dwarka's Dabri area. 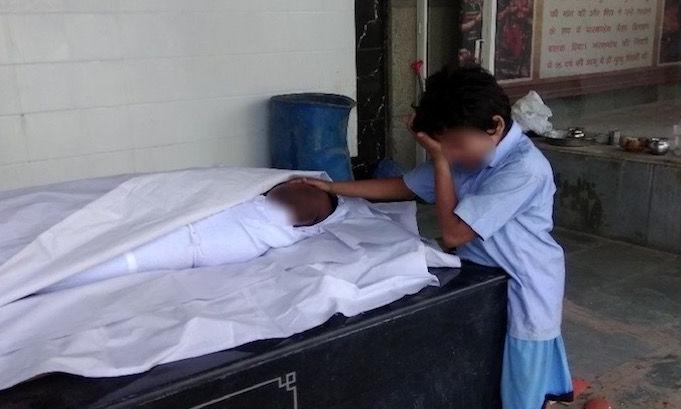 (The story has been updated since published. According to a follow up story by ABP news, it was found that the boy sitting besides the dead manual scavenger is not his son as claimed by the Journalist Shiv Sunny in his tweet. He is manual scavenger's relative.)

A photo taken by a journalist Shiv Sunny in Delhi gathered so many shares that it collected three million rupees to help the boy who was seen crying next to his father. His father died in a sewage clean-up mishap.

A sanitation worker suffocated to death after allegedly falling in the sewer of a building which he had entered to clean in Dwarka's Dabri area.

Santram Pradhan, President of the Union representing 8,000 Delhi Jal sewage workers said, "the government is callous and pays no attention to the lower caste of Valmiki's that make up most of the sewage workers."

Around 1,000 sewage workers died in the past seven years. Pradhan further says, "200 have died from asphyxiating on the noxious gases and drowning in excreta, and about 800 others have died from tuberculosis, hepatitis and other diseases."

"Half die, half retire," Pradhan says, ascribing many of the safety lapses to the lack of concern for low-caste Valmiki workers shown by Delhi Jal Board officials.

One of the challenges is that many Delhi neighbourhoods are unauthorised colonies with no design of sewage systems. The government continues to abdicate its responsibility in becoming the owners of managing the essential parts of running a country.

While on paper all safety equipment for sewage workers has been bought, but if one goes anywhere in India one sees sewage workers descending into sewage bare bodied. "Safety equipment is available," Pradhan adds. The money has been taken from coffers. But the masks, boots, gloves, pumps and other gear have been procured only on paper. So after buying the first lot years ago, they haven't bought any more. The municipalities keep showing that they are using the safety gear but it is only on paper. During an audit, they just show the old equipment bought several years ago. The sewer workers wield no more than a pick, a hoe and a bucket when they go down the drains to clean them.

A lawsuit was filed in the Delhi High Court by a Dalit rights group, the National Campaign for the Dignity and Rights of Sewage and Allied Workers, against four separate New Delhi municipal agencies, each with its own small army of sewage workers including the Delhi Jal Board. Hemlata Kansotia, a veteran social activist who heads the campaign, argues that use of the Valmiki community as sewage workers is part of a perpetual system of caste discrimination, even though India's constitution officially abolished caste in 1950. "If you see the engineers and officers, they are all from the upper castes of Indian society. The Valmiki are the poorest of the poor of Indian society."

What is the law against scavenging?

The Employment of Manual Scavengers and Construction of Dry Latrines (Prohibition) Act, 1993 is the existing law. In the 19 years that it has been in force, there has not seen a single conviction. Given the government's shameful record in enforcing the law against manual scavenging, being at times itself a violator (the Indian Railways continues to hire manual scavengers), will another law make any difference?

Martin Macwan, the founder of Navsarjan, a Gujarat-based grassroots Dalit organization, reported that in Gujarat, 70 to 80 per cent of children from manual scavenging communities drop out of school before they reach seventh grade.

Will the government ever do anything tangible?

The government intervention on behalf of manual scavenging communities is not only critical to addressing their longstanding social and economic exclusion, but will also provide impetus to households and local officials who rely upon manual scavenging rather than implementing existing government programs to modernize sanitation, say an HRW report.

Not only do some local officials fail to intervene to end manual scavenging practices by private employers, but some local village governance councils and municipal corporations also perpetuate discriminatory caste-designated labour by recruiting people from manual scavenging communities as safai karmacharis (cleaning workers) —or health and sanitation workers—and requiring them to manually clean excrement from dry toilets, gutters, and open defecation areas.

Finally, while some surveys address only dry toilets, people are also employed as manual scavengers to clear open defecation areas and pour-flush toilets in public places, to provide sanitation in hospitals and nursing homes, and to clean sewers, septic tanks, drains, and railway tracks.

Will the sitting government ever introduce the long-awaited bill on the emancipation of manual scavengers in Parliament or will they only raise these issues when in opposition?

India has to move forward

India has to leave these age-old practices behind and move forward to handling excreta by machines, not by its citizens. The caste discrimination is so deplorable against the sewage workers that in villages, the tea shops have separate cups for them. India must make an effort and move forward. The cleaning up of our attitude and head is even more important than cleaning India.