India is the only only member in the eight-nation bloc to refuse to endorse Chinese President Xi Jinping's pet One Belt, One Road (OBOR) project 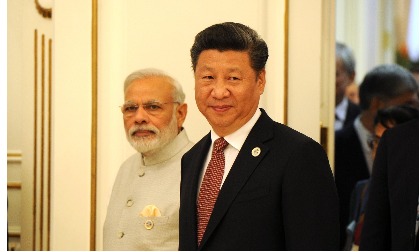 In it's first ever participation at the Shanghai Cooperation Organisation, Indian Prime Minister Narendra Modi was welcomed by host Chinese premier Xi Jinping. Pic for representational purpose only.

India stood its ground on territorial issues even though it is the newest member of the Shanghai Cooperation Organisation (SCO) and Prime Minister Narendra Modi was attending it's 18th conference for the first time. India refused to endorse Chinese President Xi Jinping's ambitious One Belt, One Road (OBOR) project with Pakistan.

Also known as the Silk Road project, OBOR is an integral part of the 3000-km long China Pakistan Economic Corridor (CPEC) which will be passing through Pakistan-occupied Kashmir. The CPEC will be connecting the two nations via rail, road, pipelines and optical fibre cable networks.

According to media reports, India's stand against the proposed project resonates New Delhi's policy of zero-compromise on territorial issues, and the OBOR may be a threat to that. However, Modi also held a bilateral meeting with Xi Jinping on the sidelines of the summit and his handshake with the President of Pakistan Mamnoon Hussain took social media by storm.

Relations between India and Pakistan had considerably cooled after several incidents - for instance the attack on an army camp in Uri by Pakistan-based terror organisations in 2016 followed by the sentencing of Indian Kulbhushan Jadhav in April 2017.

With regards to CPEC, both leaders of participating countries put up a positive front before the media. While President Hussain claimed economic properity in his country following the alliance, while host Xi spoke about security of nations. "We should reject the Cold War mentality and confrontation between blocs and oppose the practices of seeking absolute security of oneself at the expense of the security of other countries, so as to achieve security of all," he said, according to news18.

Prime Minister Modi spoke about SECURE: 'S' for security for citizens, 'E' for economic development, 'C' for connectivity in the region, 'U' for unity, 'R' for respect of sovereignty and integrity, and 'E for environment protection.

He also said that connectivity with neighbouring countries in the SCO region was a priority with regards to changing demographic.