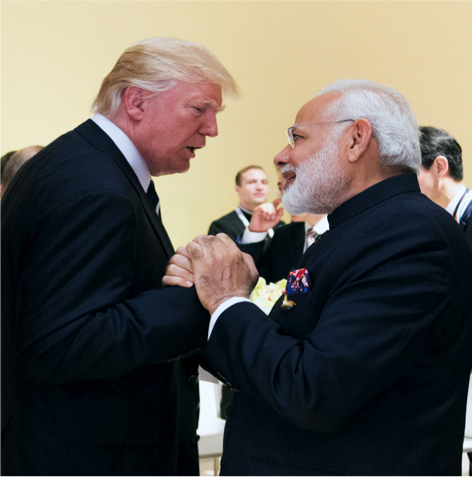 Prime Minister Narendra Modi's popularity among Indian Diaspora in a jam-packed NRG stadium in Houston was on full display. The politically volatile gathering in the stadium once again showed the hold that Modi has on Indian population in the US. The bonhomie between Indian PM and US President Donald Trump was also the major highlight of the "Howdy, Modi" event, which culminated with both going out from the stadium through the crowd holding hands.

Although the rally was not put together by Government of India, it would be a mistake to see it separately from Indian diplomacy and the PM's attempt to strengthen the country's interests on a global platform. Addressing the gathering, Modi started by saying "when people ask me 'Howdy, Modi?', I say everything is fine." He was addressing his support base in India as much as he was doing it in Houston. The biggest take away could be Trumps echoing of fight against radical Islamic terror, which mostly figured in India's statements prominently until now.

But that statement can also be another statement from US President that does not really materialize in policies. The White House issued a statement saying "It will be a great opportunity to emphasize the strong ties between the people of the US and India, to reaffirm the strategic partnership between the world's oldest and largest democracies, and to discuss ways to deepen their energy and trade relationship." This might seem like the ideal outcome of any such grand event but without any concrete policy or bilateral agreements the benefits might be a little hard to see.

Massive crowd, Trump's support in spirit and positive coverage from India can be considered a success for Modi. However, it was all without any concrete result as the Indo-US bilateral concluded without a deal announcement. India, US expected to sign a trade agreement after the event but everything didn't turn out to be favorable.

"The presence of India's Commerce Minister Piyush Goyal in New York City for discussions with United States Trade Representative Robert Lighthizer... raised expectations that India and the US are close to finalising a limited trade package," reported Sriram Lakshman for the Hindu. "This limited package is likely to be accompanied by the announcement that negotiations on a Free Trade Agreement will begin."

US wanted India to reduce tariffs and India expected reinstatement of Generalized System of Preferences. However, the deal fell through because of some disagreements on tariffs on Information and Communications Technology, dairy products, medical devices and many more.

"It appears there was no trade deal and that's disappointing," said Mark Linscott, former senior US Trade Representative negotiator and now senior fellow at the Atlantic Council, to The Hindu. "Frankly it's not a good sign that a modest deal could not get done because there are bigger issues down the road."

The spectacle, headlined by domestically oriented political content for both leaders, might bring some policy changes later but right now there is little to show. For now, it is hard to say that it brought any visible gains to India.