Bolsonaro becomes President- Is the world taking a Right turn?

Jair Bolsonaro becomes the latest Right-winger to be sworn in as the President of Brazil, posing a crucial question- is world politics swinging in the right direction? Can it be seen as a threat to democracy? 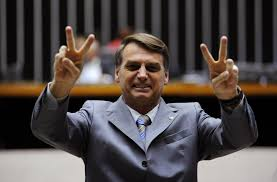 By Richa Dhiryan and Geetika Srivastava

BRASILIA — Jair Bolsonaro, a former army captain, was recently sworn into power as the President of Brazil, marking the beginning of 2019. During his campaign, he pledged to crackdown on rampant corruption and crime, which marks the nation's stark shift to the Right, ever since its return to democracy 30 years back.

At 63, Bolsonaro aims to steer the largest South American nation towards a new path, adopting a rigorous approach to criminal activities and promoting more development in the environmentally sensitive Amazon rainforests. An admirer of American President Donald Trump, Bolsonaro vowed to move Brazil away from the previous government's leftist policies.

Problematic Stances
During his election campaign, Bolsonaro has been accused of making some extremely racist, homophobic and sexist statements. Some of his infamous statements include:

• "I had four sons, but then I had a moment of weakness, and the fifth was a girl."

• "I'm not going to rape you, because you're very ugly", – to a female representative in Congress.

• "They don't do anything. I don't think they're even good for procreation any more" – referring to 'quilombolas', the black descendants of rebel African slaves.

• "You won't change anything in this country through voting – nothing, absolutely nothing. Unfortunately, you'll only change things by having a civil war and doing the work the military regime didn't do. Killing 30,000, starting with FHC [former president Fernando Henrique Cardoso]. Killing. If a few innocent people die, that's alright."

• In an interview with Playboy magazine in 2011, Bolsonaro said that he "would be incapable of loving a homosexual son … I would prefer my son to die in an accident than show up with a moustachioed man."

These shocking remarks have been condemned across the world, with various people calling him dictatorial and despotic, but he still sits on the throne today.

Environmental concerns for the Amazon
Bolsonaro's stance on the future of Amazon rainforests has caused much concern. During his campaign, he spoke about the abolition of the Ministry of Environment and a highway cutting through the forest. He has received massive support from illegal loggers, miners and land grabbers who expect him to abolish nearly all environmental and pro-indigenous legislation. He has garnered incredible support in rural central western states and all but one Amazonian state.

In August 2017, Bolsonaro drew criticism when he pledged to join Trump's US and withdraw Brazil from the Paris agreement. That entails that the country would no longer be required to restrict its emissions from the deforestation of the Amazon, which is a huge source of greenhouse gas in Brazil, more than the burning of fossil fuels. Bolsonaro has promised to ban international NGOs, such as Greenpeace and WWF that work for environmental causes.

Bonhomie with other Right-winger
US President Donald Trump, who Bolsonaro has repeatedly compared himself to in the past congratulated Bolsonaro on his victory by tweeting: "Congratulations to President @JairBolsonaro who just made a great inauguration speech - the U.S.A. is with you!"

Israel's Prime Minister Benjamin Netanyahu was one of a number of nationalist leaders, including Hungarian Prime Minister Viktor Orban, to attend the ceremony. Leftist presidents Nicolas Maduro of Venezuela, Daniel Ortega of Nicaragua and Miguel Diaz-Canel of Cuba, were uninvited by his team after the foreign ministry sent them invitations. Mr. Trump's national security adviser John Bolton has also called the three nations a "troika of tyranny".

With the string of right wing hardliners being elected over the past couple of years, the definition of what seems "politically correct" has been changing quite rapidly. Misogynistic, dictatorial, racist and pro-torture stances seem to have become the new normal. With all this, one must question- is the Right always right?