Air pollution is regarded as a global public... 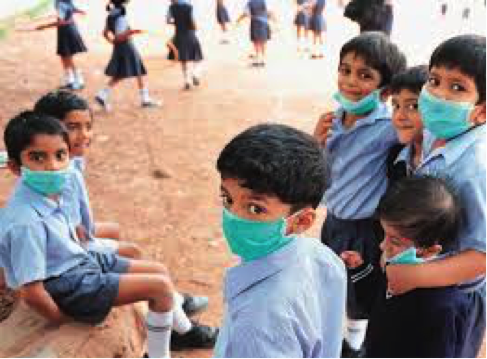 Air pollution is regarded as a global public health emergency. In both urban as well as rural areas people of all ages are exposed to the pollutants in the air on a daily basis which drastically triggers their health, in every part of the world. However, it affects the most vulnerable among us – children – in distinctive ways. Compared to adults, children are at a greater risk of many adverse health effects of air pollution, leading to a combination of behavioural, environmental and physiological and psychological factors. Children are an easy victim to the hazardous affects of air pollution, especially during fetal development and in infancy when their body organs and brains are still developing. Children breathe faster than adults, inhaling more air and, with it, more pollutants. Children are in more vicinity towards the ground, where various pollutants reach peak concentrations. They also spend ample amount of time outdoors, playing and engaging in physical activity in potentially polluted air. However, newborns and infants, spend most of their time indoors, where they are more susceptible to Household Air Pollution (HAP). It has always been seen that children spend most of their time close to their mothers while the latter cooks and does all the household chores with polluting fuels and devices. And this is considered as the most least noticed health emergency for children all around the world.

Majorly in low income communities, within those countries – the vast majority of child deaths occur from exposure to particulate matter (PCM) present in air. Particulate matter commonly known as particle pollution is a complex mixture of highly minute particles and liquid droplets that get into the air. Once inhaled, these particles can have terrible effects on hearts and lungs; these include the harmful carbon monoxide, sulphur dioxide, nitrogen dioxide and lead which have also contributed to the ozone layer depletion. Exposure to air pollution from particulate matter may take place both outdoors and indoors.

Air Pollution from Particulates (AAP) is primarily derived from fossil fuel combustion, industrial processes, waste incineration, agricultural practices and natural processes such as wildfires, dust storms and volcanic eruptions. The primary sources of air pollution may differ from urban to rural areas, but no area has been left untouched from this devastating turmoil. AAP was accountable for 4.2 million premature deaths in 2016; among these, almost 3 lakhs were children under 5 years. Breathing hygienic air at home is vital for children's overall healthy development, but widespread dependence on solid fuels and kerosene for cooking, heating and lighting results in far too many children living in horribly polluted home atmosphere. About three billion people worldwide are still dependent on polluting fuels and devices for cooking and heating. The lack of access on an increasing rate, to clean household energy has disastrous consequences on a gigantic scale: HAP was responsible for 3.8 million premature deaths in 2016, including over 4 lakhs deaths of children below 5 years.

According to WHO, air pollution can have major health disorders like, depression, anxiety, and other mental illness in kids. Exposure to air pollution during initial years of life may result to depression, anxiety, and other mental health problems in adolescence. A study, published in the journal Environmental Health Perspectives, found that short-term exposure to ambient air pollution was associated with exacerbation of psychiatric disorders in children one to two days later. "This study is the first to show an association between daily outdoor air pollution levels and increased symptoms of psychiatric disorders, like anxiety and suicidal tendency in children," said Cole Brokamp from Cincinnati Children's Hospital Medical Center. A second study, published in the journal Environmental Research, found an association between recent high traffic-related air pollution (TRAP) exposure and higher generalised anxiety. Measures to reduce the effect of air pollution on kids

• During pregnancy women should avoid smoking

• They should wear a mask whenever they step out from their homes.

• Women should reduce the number of trips they take in car.

• They should reduce or eliminate fireplace and wood stove use and prefer LPG.

• Should prefer Carpool, use public transportation, bike, or walk whenever possible.

• Should follow gasoline refueling instructions for efficient vapor recovery, being careful not to spill fuel and always tightening your gas cap securely.

• Avoid burning of leaves and yard waste and prefer composting them.