It couldn’t be more ironic that the same United Nations which extolled Aung San Suu Kyi for her struggle for people’s rights while facing enormous challenges is calling her to step down. 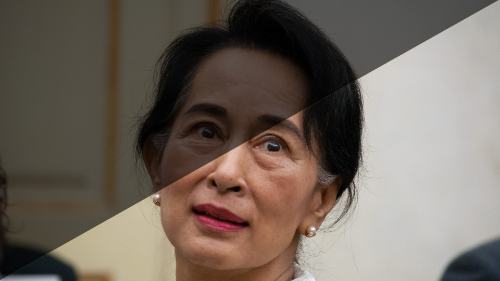 For someone who won the prestigious Nobel Peace Prize for non violent struggle and human rights, it is ironic that she maintained a reticence over the killings of innocent men, women and children. People who were inflicted probably the worst, both physical and psychological injuries, would certainly be wondering why the connoisseur of democracy is standing with the demons of destruction.

It couldn't be more ironic that the same United Nations which extolled Aung San Suu Kyi for her struggle for people's rights while facing enormous challenges is calling her to step down. This spawns two important questions. First, how fair is the obloquy and second, why is she so cautious on the whole issue?

The answer to the first point lies in the recent report by the United Nations Fact Finding Committee which vehemently advocates the trial of those in the higher echelons of Myanmar Army. It accuses them of genocide and war crimes. The report also questions Aung San Suu Kyi's inadequate actions in the wake of the barbaric attacks on Rohingya Muslims. In fact, for a long time, Mrs. Kyi did not even acknowledge the problem. It is not that she has confessed/addressed it now, but in UN report, the international community has a robust and authentic proof to put her in the dock.

In politics, vilification is a common place and so is the tradition of dissipation. However, Mrs. Kyi has some serious questions to answer. Following is a list of questions that needs to be asked to the leader who once claimed "the only real prison is fear, and the only real freedom is freedom from fear"

Question 1- How does ethnic cleansing help in democratization of the country?

Question 2- How did she respond to the army, if ever she did, with regards to their actions?

Question 3 - What would she have told her father about her helplessness and hopelessness in tacking the issue?

Question 4 - How does she define Human Rights?

Question 5 - Who is responsible for more than 7000 deaths?

A detailed report of the atrocities on Rohingyas will be published around mid of September, but what has been made public is good enough to make her take a close look in the mirror. The UN committee argues the crimes committed show a particular pattern and it would not have been possible without proper planning.

In other words, the army was waiting for an opportunity of annihilation. On instigation they did what they had long planned for – kill, torture, rape and pillage people. It was nothing but a sheer display of monstrosity. However, the leader who was under house arrest for a period of fifteen years, and had support across the globe, could not save innocents in own country from being butchered.

This takes to the other question raised above. Why has she been tight lipped on the matter? You don't have to be an expert on Myanmar affairs to comprehend it. She doesn't want to stand in army's way despite being humiliated by them for decades. A voice against the military would be slippery slope that might cost her job. She doesn't look like one willing to go for the life of people. Could she have averted this cataclysmic crisis? Maybe not. Could she have attempted to stave it off? Certainly yes. She could have prevented it from aggravating.

No wonder US President Donald Trump's supporters find him a strong contender for Nobel Peace Prize.