The Amazon rainforest, the lungs of the earth is... 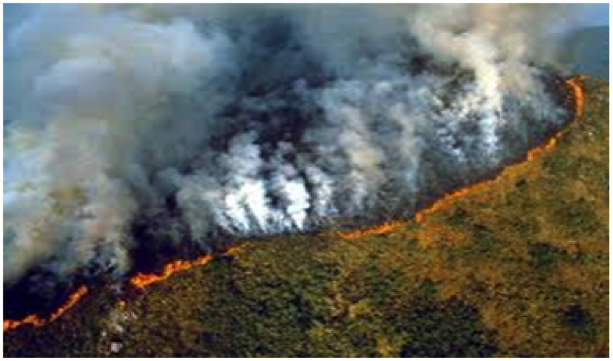 The Amazon rainforest, the lungs of the earth is burning with over 9500 fires at different places since August 15. Brazil has seen many fires in the year 2019 but there are more than 10,000 which have been started in the past few weeks. Most of these fires are started due to man's daily activities be it agriculture or industrial use. According to data given by Brazil's National Institute for Space Research (INPE) this has happened due to increase in deforestation. The report says that Amazon has shrunk by 1,345 sq Kms.

The fire is not only limited to Brazil its blaze has affected Bolivia; the deadly blazes ruined the farmlands and forests. However unlike Jair Bolsonaro, President Eva Morales took the foreign aid to help fight the fire. Bolsonaro have accused INPE of fraud as he says there is no such thing as Amazon fires, it is a stunt by INPE to tarnish his image. But after images of darkening skies above Sao Paulo more than 2700 km away from the fire went viral, the world was in utter shock.

Critics say that it is poor management of economic and environmental policies by Bolsonaro. He announced in his speech after becoming the president of Brazil that they will reach the development in Amazon too. As INPE reports suggests he was being true to his words and brought this day on us. Unlike Trump, Bolsonaro too don't believe in environment degradation and hence had a very poor environmental ministry. He actually chipped away all the protects that Amazon enjoyed in the past year and have been rigorously involved in deforestation, he made Ricardo Salles the former environment minister guilty of administrative improprieties for altering a map to benefit the mining companies. He also accused environmental charities that they are the ones who started the fire for the attention and now they are pinning him.

It is shocking to see how personal benefits of someone can affect the whole human race. Balsonaro says he works for the goodwill of the people of Brazil. Proving them jobs and giving a crime free environment is not more important than providing them clean air to breathe and a stable environment. Leaders like Trump and Bolsonaro can become Gandhi's three monkeys but that doesn't change the facts so withdrawing from Paris Climate Agreement or not believing in climate change will not undo the repercussions.

However, after pressure from all over the world Bolsonaro have sent 44,000 military troops to help with the fire fighting efforts. The damage could have been controlled if politics was not involved to such an extent. The Amazon fires were a warning to the world to start caring about the environment else things will get a lot worse.

Researchers have said that to limit global warming to 1.5 degrees Celsius, the world needs to cut their greenhouse gas emissions in half by 2030, a goal that is far beyond most countries' current commitments. There will not be any solutions or plans presented in line with these figures today, because these numbers are too uncomfortable. And you are still not mature enough to tell it like it is

Maybe it is a late awakening or world pressure but seven South American countries came together to deal with the issue. Bolivia, Brazil, Colombia, Ecuador, Guyana, Peru and Suriname signed a pact, setting up a disaster response network and satellite monitoring in a summit in Colombia.

"This meeting will live on as a coordination mechanism for the presidents that share this treasure - the Amazon," said Colombian President Ivan Duque, who hosted the summit in the city of Leticia.The leaders of these seven countries, agreed upon reforestation to restore the beauty and integrity of the forest.

President Trump, who has derailed federal action on climate and pledged to take the US out of the Paris agreement, sat in on today's summit for all of 15 minutes in the UN Climate Summit. Climate activist Greta Thunberg spoke at the United Nations Climate Action Summit on Monday, where she scolded world leaders for failing to address climate change. The 16-year-old has become one of the leading voices for a generation confronting the consequences of a warmer planet.

"People are suffering. People are dying and dying ecosystems are collapsing. We are in the beginning of a mass extinction, and all you can talk about is the money and fairy tales of eternal economic growth," she said, as she fought back tears. "How dare you! For more than 30 years the science has been crystal clear. How dare you continue to look away and come here saying that you're doing enough when politics and solutions needed are still nowhere in sight."

Thunberg's words are just the voice of the youth who could see that their elders are destroying their future with their own hands. It is high time that rather than 165 countries whole world should start making efforts because after all we are the one who have to live here. So, let's no more discuss on paper let's take initiatives.