Prime Minister Justin Trudeau says that Canadians may be polite but they stick to their stand. Tax wars between the country may not see an end anytime soon. 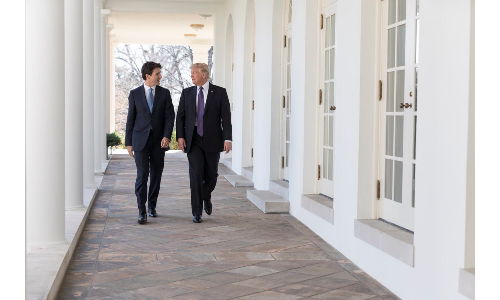 The G7 summit was supposed to improve fast-fraying ties between America and Canada but it was reduced to petty name calling by the US President Trump of his Canadian counterpart Trudeau. Pic for representational purpose only.

The G7 industrial summit ended on a stand-off as United States President Donald Trump threatened to escalate his tax war and ordered US officials to withdraw support of the summit's joint statement, further alienating US from its other allies.

This comes hours after the other six member states declared the joint statement as having support of Trump and the US President himself said that his relations with the other leaders were a 'ten'. However, Trump took an offense to Canadian Prime Minister Justin Trudeau's remarks at a post summit press conference.

"Based on Justin's false statements at his news conference, and the fact that Canada is charging massive Tariffs to our U.S. farmers, workers and companies, I have instructed our U.S. Reps not to endorse the Communique as we look at Tariffs on automobiles flooding the U.S. Market!," Trump wrote on Twitter after leaving the summit. However, Trump did not point of which exact statement made by Trudeau was incorrect.

"We're like the piggy bank that everybody is robbing," Trump said at a news conference earlier. "And that ends."

At his press meet, Trudeau criticised not only Trumps decision to place tariffs on steel and aluminium imports from the European Union, Mexico and Canada, but also rapped Trump for citing security reasons.

Trudeau said: "I highlighted directly to the president that Canadians did not take it lightly that the United States has moved forward with significant tariffs on our steel and aluminum industry... Particularly, [they] did not take lightly that it's for a national security reason that for Canadians . . . who stood shoulder to shoulder with American soldiers in far off lands in conflicts from the First World War onward, it's kind of insulting."

"Canadians, we're polite, we're reasonable, but we also will not be pushed around," Trudeau added.

Whereas the G7 summit was seen as a way to improve fast-fraying ties between America and other parties, it later was reduced to petty name calling by the US President. The G7 - US, Canada, Britain, France, Germany, Italy and Japan - had dropped its eigth member Russia in 2014 after Putin annexed Ukraine's Crimea. However, Trump also called for re-introducing the State by laying the blame for the annexure at former US President Obama's feet.

With leaders of other countries in no mood to cave in, it is now time to see what the next step is.