5 countries with the strictest dressing codes 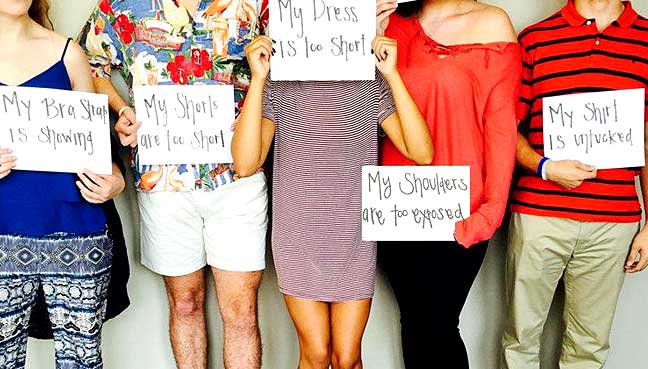 Policing behaviour is a justified act, there are a lot of people in a country that need behaviour alterations. But is having strict policing of fashion in certain countries justified? Several unnecessary and uncalled bans on things like haircuts and clothing exist in different countries. Though every country has reasons to exercise these bans and restrictions, it is also true that they kill the basic motto of letting people express themselves. Dressing to ones' heart's desire is a way of expressing their true self for someone. Putting restrictions on this makes people feel like they are being stopped from doing what they wish or from showing who they are.

The word 'fashion police' has been given a literal meaning now. With citizens being enforced to wear what is "appropriate" and "ethical", the ones who don't abide by these rules are being punished and fined, like the actual police. There are a few countries that subject their citizens to fashion policing, and yes, its not just Saudi Arabia!

The center of attraction in conversations about strict dressing laws, Saudi has laws for men and women both. It doesn't matter if you're a Saudi local or a tourist, if you're a woman present in Saudi Arabia, flashing even an inch of skin is a criminal offence. Muslim women have to wear a naqab that shows only their eyes and a long black cloak called a burqa or an abaya and women on vacation to Saudi have can get off with wearing long coats. But these restrictions aren't limited to just women. In 2009, the government of Saudi arrested approximately 70 men from a private party. What was their offence? Cross-dressing and behaving like women for fun at a party.

There are quite a few restrictions for citizens of North Korea. Men are asked to have short hair, as short as 1-5 cms, they are supposed to get regular haircuts, every 15 days. There are total 30 legally allowed haircuts, 15 for men and 15 for women, no other haircut is permitted. Hair dye is also banned and against the law. Women are not permitted to wear skinny jeans or tight trousers, only straight, loosely cut trousers are allowed. Style of dressing that promotes the western culture or foreign clothes are not allowed. The reason for all these restrictions is because the government thinks citizens get detached from their own country when they follow western dressing.

North Korea is not the only country where women face backlash for wearing trousers. In 2014, nine Sudanese women faced punishments for being seen wearing western-style leggings and slacks. These offences also are not absolutely gender centric. In 2010, some male models were convicted with indecency and fined for wearing makeup.

France introduced the "burqa ban" in 2010. While the ban aims to stop people from covering their faces with motorcycle helmets, hoods and even naqabs and burqas. The ban has also attracted negative energy because it is considered to be against the religious practice for Muslim women. A case brought up against this law was rejected by the European court of law stating "uncovered faces encourage citizens to live together".

Women in socially conservative Uganda are faced with arrests if they are seen wearing skirts or shorts that hit above the knees, following the new legislation that has banned "indecent dressing". Women being harassed and molested in streets has followed this ban. Many parts of Uganda have experienced vigorous opposition and protests against this ban. The Prime Minister has agreed to review the law.

Restrictions for how people dress and policing fashion are less frightening and more annoying and likely to garner firm and strong opposition from citizens. Actions and activities that are restricted are usually the ones that gather more and more attention.