Report News
Home > Editorial > Voice of the People > Tryst with Thumri: A walk down memory lane

Tryst with Thumri: A walk down memory lane

The ongoing Thumri Festival by the Delhi government's Sahitya Kala Parishad showcased a packed house, eminent singers and echoes of memories past 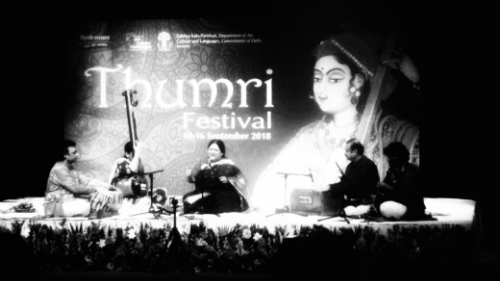 Shubha Mudgal during her performance at the Kamani auditorium on Saturday, Sept 15, 2018 at the Thumri Festival organised by the Delhi government’s Sahitya Kala Parishad.

On the evening of a spectacularly ordinary day, I walked into the Kamani auditorium of New Delhi, hoping for something extraordinary. I was early, a good half hour before the doyens of Thumri would grace the stage at the Festival conducted by the Delhi government's Sahitya Kala Parishad. When it finally did at 6:30pm, every seat was taken and so was every inch of the carpeted floor. It wasn't just a full house, but an over-spilling one as enthusiasts of all age stood, sat or hunkered down to enjoy a few hours of classical music, peans sung in praise of Radha-Krishna and their immortal love.

Yes, the event had no entry fee with a finale by the well-renowned Shubha Mudgal, but even then the turnout was quite impressive.

They say that music is transcendental; it transports one to another place and time tucked away in our memories. Yesterday, it took me back to my childhood, episodes spent in auditoriums and workshops, amid artistes who seemed to have been touched by the divine. Almost two decades back, as a student of Kathak I had once attended a workshop by the legendary Pandit Birju Maharaj in Kolkata. Till date I remember a session of abhinaya in Nritya - his eyes would electrify the atmosphere, his expressions of ras would draw you into a world where nothing else existed. Later, I would watch as many of his performances as I could, even though I no longer pursued Kathak training.

A few years later, I would watch Sarod maestro Ustad Amjad Ali Khan Bangash, accompanied by his two sons Amaan Ali Khan and Ayaan Ali Khan who are exceptional Sarod players themselves, and torchbearers of the family tradition. Their renditions reverberated through the hall, finding a corner in my soul where it would continue to echo for years. I realised then that I was irrevocably drawn to music – live concerts specially.

In college, one of my first assignments would be to cover a Thumri concert by the late legend Girija Devi. Her brilliance and aura would spellbind the audience, putting them in a thrall. While looking for a story, I realised the power of music – you become the story. You end up with a smile or in tears, even when you don't understand the words. It doesn't simply transcend, it transforms.

Last evening, I found myself again among the audience, once more succumbing to memories and emotions that ebbed and flowed with the music. Padmaja Chakraborty expertly opened the act, followed by brilliant performances by Jayteerth Mevundi whose talent has been praised by many. He set the stage for Shubha Mudgal whose raag bhairavi reached into the very souls of those present. I should be extolling the good work done by the organisers, the individual singers and accompanying musicians, yet I can only write about my selfish and deeply personal experience. And as the concert ended, all I felt was gratitude.