Report News
Home > The world this morning > The World This Morning: November 26, 2020

Bringing you the world first. 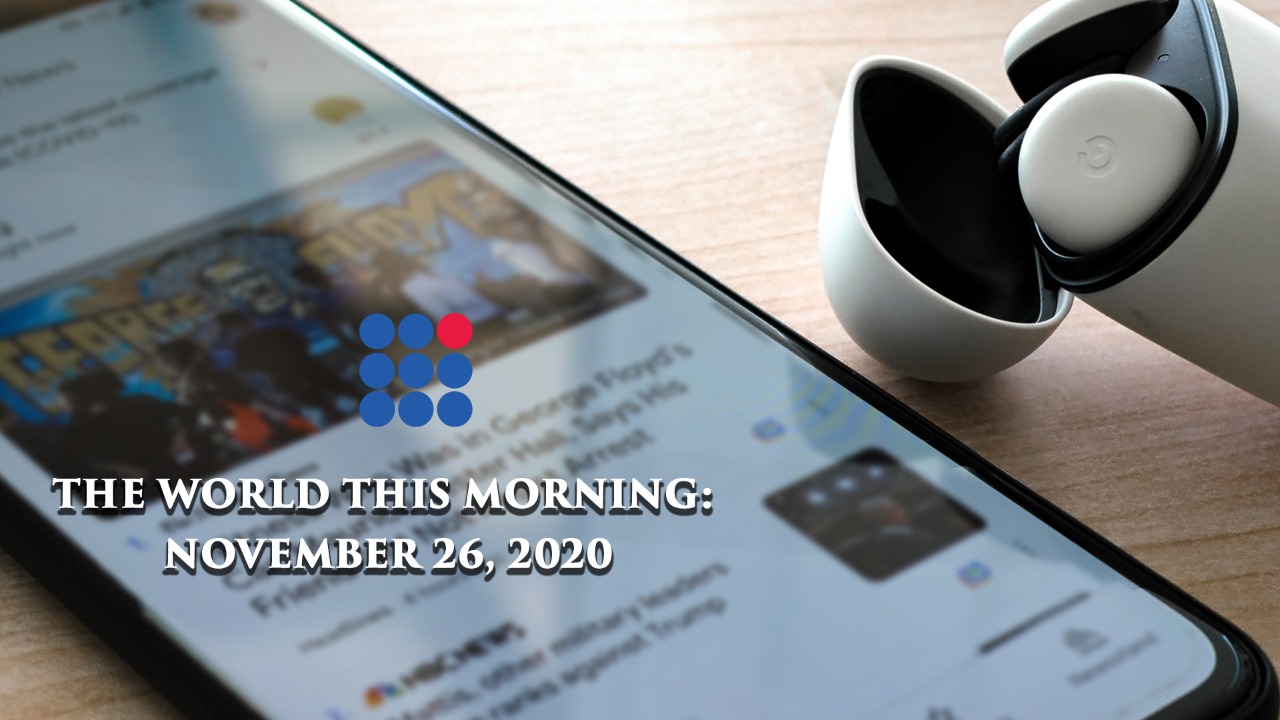 Police used water cannons to stop the farmers in the north Indian state of Haryana marching from the city of Ambala towards India's capital New Delhi on Wednesday afternoon. The farmers broke barricades at 3 places as they marched along on the National Highway. The farmers are protesting against the new farm laws made by the Government of India.

The Sri Lankan Foreign Minister, Dinesh Gunawardana said on Wednesday that the UN Human rights resolution 30/1 has violated their constitution and the Sri Lankan government has decided to withdraw from this resolution. Sri Lanka will withdraw from the resolution after the U.S. imposed sanctions Sri Lanka's Army chief Lt Gen Shavendra Silva and his immediate family members over alleged gross violations of human rights during the final phase of the island nation's Civil War in 2009.

In the early hours of Wednesday Indonesia's minister for maritime affairs and fisheries, Edhy Prabowo was arrested at the Soekarno-Hatta airport for corruption charges. Prabowo is the first member of President Jokowi Widodo's cabinet to be held over graft allegations. Earlier this year, Indonesia lifted a ban on exporting baby lobsters, previously put in place to conserve the wild population of the animal. Reportedly, Prabowo was involved in corruption due to issuance of export permits for lobster larvae. Allegedly, the arrests were linked to an investigation into the export of baby lobsters. According to the government's anti-money-laundering watchdog, Lobsters are among Indonesia's top fisheries commodities. The illegal export of larvae cost the country $62 million in lost revenue in 2019 alone. Indonesia, Southeast Asia's biggest economy, ranked 85 out of 198 on Transparency International's Corruption Perception Index in 2019, improving from 89 a year earlier.

Last week, Kuala Lumpur City Hall (DBKL) declared new guidelines for liquor licences. The new rule restricts the sale of hard liquors in their premises from Oct 1, 2021. The restricted areas include certain types of grocers including the sundry shops, convenience stores and Chinese medicine stones. This order has set up tables for debate and discussions. It has put a question mark on the liberty and rights enjoyed by the non-muslims (One-third of Malaysia's population). Even the Hypermarkets, supermarkets, restaurants, and pubs are prohibited to sell liquors within their operating hours. Many citizens call it a violation of freedom to practise their culture in a federal constitution. Recently, federal laws were also amended. The new law includes mandatory jail sentences for drunk drivers who cause death.

INDIA, US EXTEND MOU FOR COOPERATION ON NUCLEAR ENERGY

India and the United States have jointly agreed to extend their Memorandum of Understanding (MoU) for cooperation on nuclear energy for 10 more years. The joint statement highlights the commitment of both countries in 2010. The Global Centre for Nuclear Energy Partnership (GCNEP) was signed on November 7, 2010, with an ideal agenda of promoting safe, secure, and sustainable nuclear energy for the service of global partnership. The statement said, "India and the US, recognizing and appreciating the strength of the enduring partnership between the two countries on matters of security and reaffirming the important contributions of the U.S.-India nuclear and radiological security cooperation for the benefit of their citizens and the world, extended their cooperation in this area in October 2020 by signing a ten-year extension of the GCNEP MOU."

US President Donald Trump on Wednesday pardoned his former national security adviser Michael Flynn who had pleaded guilty to lying to the FBI during the investigation into Russian meddling in the 2016 presidential election. It was the highest-profile pardon granted by Trump since he took office.

The 60-year-old, football legend, had an emergency operation for a subdural hematoma. He died of a heart attack on Wednesday.

Besides his illustrious career, he is best remembered for the two goals that pushed out England out of the world cup. He helped Argentina win the 1986 World Cup. The world is mourning his loss.

IATA said that lower taxes increases travel and also impacts local economies of tourism locally. IATA said at the current tax rates and challenges that the airline industry is posed with most airlines may not survive next year.

Scotland's decision is based on the idea to remove period poverty. The idea is to be able to improve health and hygiene of women and reduce the deprivation that many women may face. The Period Products (Free Provision) Scotland Bill,will provide tampons, sanitary pads and silicon cups free of cost at designated public places such as community centres, youth clubs and pharmacies.

The Europeans are still demanding easing of lockdown during Christmas. So with Christmas fast approaching, governments are having to make tough decisions on whether to ease restrictions in time for the holiday period.After weeks of national lockdown in France, President Emmanuel Macron has imposed restrictions which will start being eased from 28 November. But the majority of lockdown measures will stay in place until just ahead of the festive break on 15 December.Shops, theatres and cinemas will reopen in time for Christmas and people will be able to visit their families over the festive period.