Report News
Home > Editorial > Voice of the People > #SundayRead: Book Review of 'When The Devil Whispers' by Ajinkya Bhasme

#SundayRead: Book Review of 'When The Devil Whispers' by Ajinkya Bhasme

A true-blue crime thriller that is quite a gripping read 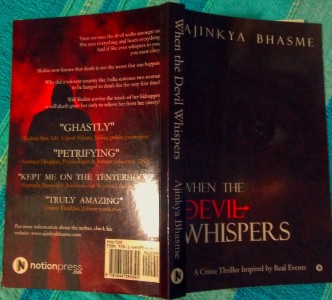 Before you start reading, the book tells you it's based on a true story. Once, you are finished with it, you realise that the story has obvious references to the horrific crime that rocked Maharashtra but the creative differences also bring in fresh twists and added flavour to the narrative.

Convicted serial killers Renuka Shinde and Seema Gavit are quite a case study for students of criminology. The two sisters and their mother started a ring of kidnapped children who would pickpocket, only later to be brutally tortured and murdered. Their conviction, and the subsequent court verdict of death penalty, attracted quite a lot of media attention as well as public discussions.

With this story as a foundation, Ajinkya successfully branched out, fleshing out his fictional characters, gripping twists and turns, creating a fictional thriller quite distinct from the factual one. His plot grew at a steady pace, not dipping or upbeat that tends to happen for in crime novels. The characters and locales were relate-able, familiar, yet quirky and full of flavour. It was definitely an interesting read, and the book sufficiently piqued my interest in the real-life event.

For Ajinkya, as he explained over the phone, he had been intimately aware of the details from the legal perspective. The rest took many years of research and jail visits to elicit. The neighbours, who would rather forget the shameful incident, were difficult to convince to open up to him. The good news is, the story has come out well, and told succinctly rather than getting lost in details of authenticity.

However, the book could have had a more precise and tighter editing. A large part of the narrative is via the first person account of various characters. The jump from one such voice to another seemed jarring sometimes, not fitting the tone of revelations in the chapter. If it was meant to shock, it unfortunately acted more as a distraction for the reader.

Having said this, most of the self-published books that come across my desk for a review tend to avoid the presence of an editor. For a writer to edit his or her own book is like patting oneself on the back. It is a trap better to be avoided. Ajinkya's When The Devil Whispers as a debut novel as well as a self-published one have fewer errors of judgment and is a solid entrant into the world of writing.

The book cover, dark and befitting the story, could have been more attractive.

Overall, the book left me with a good first-time impression and I would definitely buy Ajinkya's next.