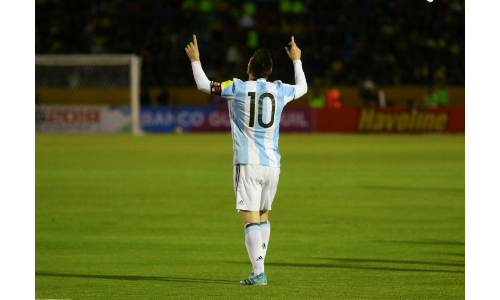 Argentina will begin their World Cup gambit against Iceland on Saturday in Moscow. Pic for representational purpose only.

Kolkata is known for it's love for football, and there are times when fans will do anything to prove their love for a team. This Argentina fan decided to paint his house light blue and white - the quitessential colours of the team - ahead of the World Cup in support of Messi's boys.

It was way back in 1986, during the World Cup, when Shib Shankar Patra watched Diego Maradona bring home the coveted trophy. "For me Messi is an extension of Maradona. Everyone in my family loves Messi. We love his behaviour, we love everything about him," Patra told news agency AFP.

Patra sells tea from a shop on the ground floor of his house. He wanted to visit Russia and watch his football heroes live in action but ran short of money.

"I had saved 60,000 rupees ($890) but it was not enough for the trip. I will now watch Argentina's games on TV and cheer for my favourite footballers."

Argentina will begin their World Cup gambit against Iceland on Saturday in Moscow, with games to follow against Croatia and Nigeria in Group D.

"I will be praying everyday for Argentina's success. Nothing gives me more happiness than seeing them win on the field," said Patra.