The world celebrates June 6 as yo yo day

Donald Duncan Sr. was an entrepreneur who in 1930 got into the yo-yo business. This day highlights the authenticity of a historic toy called Yo-Yo. 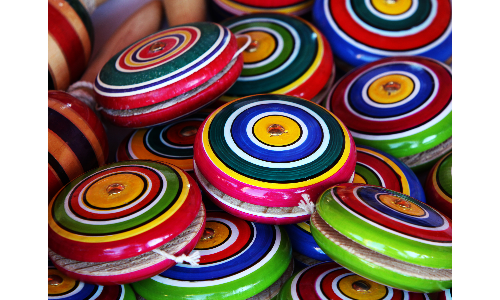 Every year, June 6 is celebrated as National Yo-Yo day which is believed to fall on Donald Duncan Sr.'s birthday. Donald Duncan Sr. was an entrepreneur who in 1930 got into the yo-yo business. This day highlights the authenticity of a historic toy called Yo-Yo.

A yo-yo is an object that consists of an axle connected to two disks and a length of string looped around the axle. It is played by holding the free end of the string, allowing gravity or the force of a throw to spin the yo-yo and unwind the string, then allowing the yo-yo to wind itself back again. This is called "yo-yoing." Yo-yoing is a term often used to describe a person fluctuating between two difficult decisions.

Yo-yos have been popular toys for over 2,000 years. Early forms of the toy were called by different names, such as quizzes, bandalores or Jou-Jous. ( people.howstuffworks.com)

The first known painting of a yo-yo is on a Greek vase from approximately 440 BC that shows a boy playing with a yo-yo.

Donald F. Duncan Sr. noticed how quickly the toy captured the interest of kids and decided to get into the business of making yo-yos and the company did well in its first few years. For the next 25 years, all of Duncan's yo-yos were made of wood. In 1955, Duncan partnered with a company called Flambeau to produce plastic yo-yos. The company continued to promote yo-yos in innovative ways, including the purchase of advertising on television. The interest generated from advertising was both a boon and a curse for the company. Demand quickly exceeded factory capacity, so the Duncan Company began to borrow money in order to meet customer expectations. Sadly, it borrowed more money than it could possibly pay back. In addition, the yo-yo craze of the early '60s waned after just a couple of years, and profits dropped dramatically. (people.howstuffworks.com)

Most of you might not be aware of that fact that we do have The National Yo-Yo Museum which is located in Chico, California.

We have underestimated Yo-yo's a lot but a rare, vintage collection of it can attract collectors to spend hundreds of dollars on it.

Today, the Duncan Company is still producing yo-yos and is also competing with several other companies. The Company has excelled in the yo-yo business while some prefer to produce traditional yo-yos, others experiment with its texture and produce innovative models comprising clutch systems along with ball bearing to improve its performance. Interestingly, many yo-yo competitions and events are held across the world and it is pointed out that in few years yo-yo craze will spread all over the world.