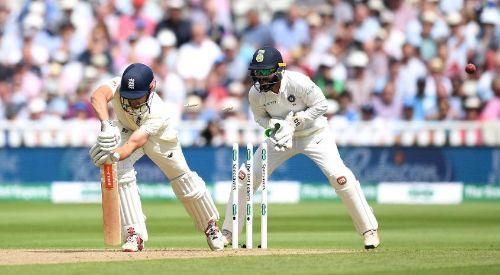 India may have spoiled England's 1000th test match at Edgbaston. England, who at one point was 216/3, only made 285 by day one and lost nine wickets in the process. The Indian bowling was fantastic with veteran spinner Ravichandran Ashwin picking up four important wickets. Ashwin bowled a beautiful delivery to take the wicket of arguably England's best test batsman Alastair Cook. The ball was pitched on leg side and turned sharply to knock off Cook's stumps. This was the eighth time Ashwin dismissed Cook.

Here's how fans reacted to the delivery on social media:

That ball to Cook was one gem of a delivery! #ENGvIND #RaviAshwin

Alastair Cook is comprehensively bowled by Ashwin and England are 26-1.

Cricket analyst and commentator Harsha Bhogle was also impressed by Ashwin's bowling and tweeted about it.

My highlight of the day has been the bowling of Ashwin

Cook with most centuries for England in tests (32) was disappointed as he got out for only 13 runs.

Returning speedster Mohammad Shami was best among the fast bowlers and took two wickets. Umesh Yadav and Ishant Sharma took one wicket each.

England Skipper Joe Root and opener Keaton Jennings stabilized the innings after Cook's wicket with a partnership of 72 runs. Jennings batted well and made 42 runs off 98 balls. Root and Bairstow made a partnership of 104 runs. Root got run out by Kohli and made 80 runs but yet again failed to convert a 50 into a 100. Bairstow scored a well made 70 before getting out to Umesh Yadav. All-rounder Ben Stokes made 21 runs and in form explosive batsman Jos Butler got out for a duck. Tailenders Adil Rashid and Stuart Broad got out quickly. Bowling all-rounder Sam Curran is not out and has made 24 runs so far alongside Tailender James Anderson. England made a total of 285 runs with loss of nine wickets on day one.

Can't keep Kohli out of the game

Indian skipper Virat Kohli was as usual super active on the field. He run out Root with a superb throw and dismissed the well settled batsman for 80. He also mocked Root with the "mic drop" celebration from the ODI series. Kohli also made the bold decision of excluding test specialist Cheteshwar Pujara for in form batsman KL Rahul. He made a great decision of bringing Ashwin to bowl in the seventh over and Ashwin eliminated Cook in the very over.

It was not sure whether Ashwin would be picked for the first test match. It was expected that Kuldeep Yadav, who performed well in in the ODI and T20 would play in tests and Ashwin would be dropped. But captain Kohli went with his veteran and experienced bowler and Ashwin ran through the competition by taking four crucial wickets. He was dropped from the ODI side due to his average performances in the champions trophy. Ashwin proved all his doubters wrong.

India has found itself in a good spot after bowling well on day one. It has restricted England to a low total and need to capitalize on it. India has a good batting lineup and the skills to make a good score. Kohli, Rahul and unproven Dinesh Kartik will be batsman to lookout for. India hasn't won a test at Edgbaston and there's a good chance right now.