Kohli's brilliant ton saves the match for India on day 2

Indian cricketer, Virat Kohli scored his first ever 100 in England. 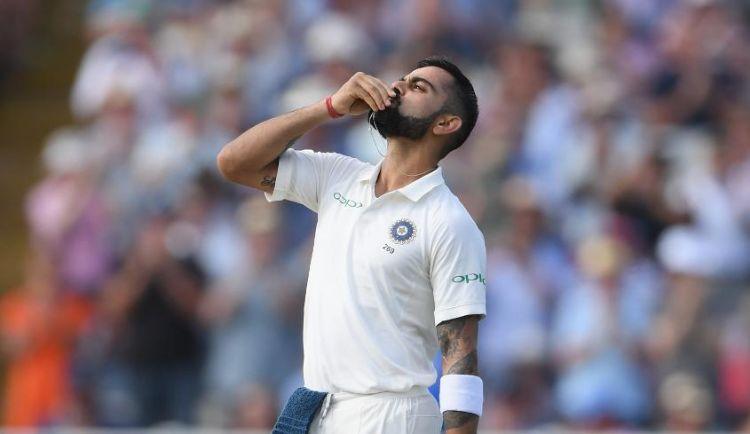 Skipper Virat Kohli's ton saved the day for India on day 2 of the Edgbaston test. India bowled out England for 287 at start of day two.

India got off to a good start as openers Dhawan and Vijay made a partnership 50 runs. Everything was looking good but then Vijay got out. Then in form batsman Rahul gave his wicket away and soon Dhawan joined him. All three wickets were taken by 20 year old brilliant bowler, Sam Curran. He took 4 wickets for 74 runs. Stokes, Rashid and Anderson also bowled well and took two wickets each.

Captain Kohli and Vice-captain Rahane were at the crease . Rahane continued his average run and got out by making only 15 runs. Dinesh Kartik who replaced injured Wicketkeeper Wriddhiman Saha also got out for a golden duck. Kohli saved the day as other Indian batsmen kept getting out on the other end. He was dropped twice on 21 and 52 and made the England fielders regret their mistake.

Kohli went on and hit his first ever ton at English soil.

Here's how cricketers and fans reacted on their social media handles.

Been a privilege to have seen this innings from Virat Kohli.

There are three types of people in this world:

1. Those that think that Virat Kohli is the undisputed greatest batsman of all time.

There are three types of people in this world:

1. Those that think that Virat Kohli is the undisputed greatest batsman of all time.

Kohli went on to make 149 runs of 225 balls. His innings included 22 fours and a six. Kohli and the tail (Shami, Ishant and Yadav) made 99 runs between them with the tail scoring only eight runs in total.

Kohli's innings of 149 is the second highest by an Indian batsman in an innings where no other batsman went past 30 runs. He scored 54.37% of the team's total runs.

England had a lead of only 13 runs with four overs left on day two. Ashwin again bowled Cook with a brilliant delivery. This was the ninth time that Ashwin took Cook's wicket. England is 9/1 at the end of day two with a lead of 22 runs.

Day three promises to be a cracker for sure.