The gesture by the Indian cricketer Chahal has surprised people on both the sides of the border. 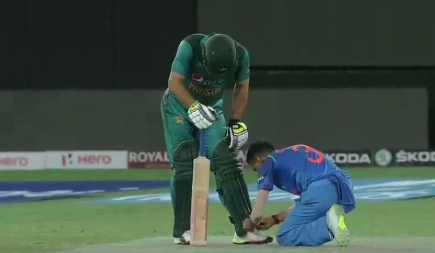 The morning news was all about two soldiers of Indian border security forces whose eyes were gouged out and throat was slit. But this did not impact the afternoon cricketing session between India and Pakistan.

During the match, Usman Khan the Pakistani batsman had trouble running back and forth on the pitch and all of a sudden the audience witnessed Indian cricketer Chahal kneeling to the ground to tie his opponent's shoe. The action may be a simple gesture in the spirit of sportsmanship but it goes to show that there is a way out of all the animosity that exists between the two countries.

Background of the animosity between Pakistan and India

India and Pakistan are engulfed by an on-going territorial dispute where Pakistan wants India to hold a referendum in Kashmir. Pakistan believes that the Muslim majority population of Kashmir should be able to choose their destiny on whether they want to be independent or part of Pakistan. However, India believes that Pakistan should return certain parts of Kashmir occupied by them since the Pakistani troops illegally occupied territories of Kashmir inspite of the King of Kashmir signing treaty of accession in favour of India. Some of this land was handed over to China by Pakistan.

The nations will have to show compassion and restraint

A Pakistani digital news platform wrote, "India may have won the score and the match, but humanity was the real winner at the game last night. During the match, a kind gesture made by Indian cricketer Yuzvendra Chahal took us all by surprise". People praised Chahal for his kind action and almost everyone thought this was the most beautiful moment.

Both nations may learn from this action by an individual as an example of how they can move forward.