EXCLUSIVE: Swapnil Singh on how Hashim Amla helped him become a better player

After helping India Blue to a massive victory over India Red in the Duleep Trophy final with a terrific all-round performance, Baroda all-rounder Swapnil Singh revealed how his time with Hashim Amla during his IPL 2016 stint with Kings XI Punjab helped him become a better player. 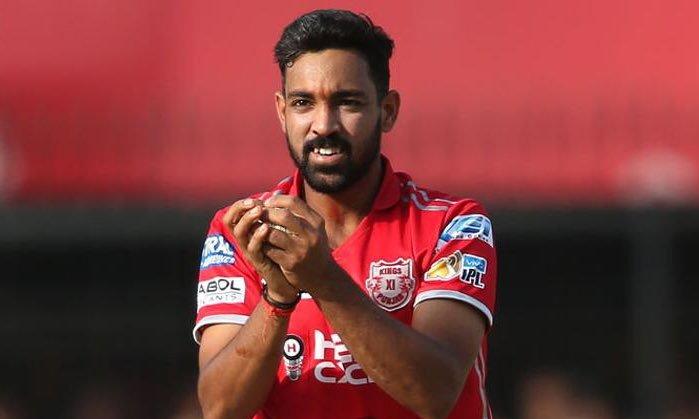 After helping India Blue to a massive victory over India Red in the Duleep Trophy final with a terrific all-round performance, Baroda all-rounder Swapnil Singh revealed how his time with Hashim Amla during his IPL 2016 stint with Kings XI Punjab helped him become a better player.

"After I was picked by Kings XI Punjab in 2016, I got the opportunity to work a lot with Hashim Amla. Fortunately, I am very close to him now. He helped me a lot with my batting. I got the insights on what the top players do at the international level. That helped me improve my batting skills," said the 27-year old. "He is just a call away. That's very fortunate for me. I can call him anytime. He is so good as a human being that he listens to my problems patiently. He always talks about the mental aspect of the game. Like how you need to be prepared mentally at this level for everything," he added.

Swapnil's exploits in this match include a terrific knock of 69 runs in a 7th wicket stand of 153 runs with Nikhil Gangta that propelled their team to a massive first innings score of 541 runs. Add to that a terrific bowling spell of 22-8-58-5 that completely derailed India Red's batting line up, thus folding them up for 182 runs and eventually enforcing a follow on.

India Blue were 284/6 when Swapnil walked out to bat. However, the partnership between him and Gangta completely demoralized the bowling team as they went on and on.

"We played two games here in Dindigul. And the conditions during the first session is quite tough here. We thought we would play cautiously but we would play positive cricket. Whatever bad balls are we get, we would try to score of it. And the second thing was to trust our defense here as that was the key to surviving against good balls. And we concentrated on playing playing in small 5-10 overs blocks and not to think ahead much. That was the key," said Swapnil about his partnership with Gangta.

However, he was also disappointed that he could not go on to get a century.

He admits, "I am disappointed that I got out to a bad shot. I trusted my instincts and went through with the shot. I could have scored a century but that doesn't mean that I would have. But yeah felt sad about that I didn't play the right Shot."

But he has no complaints about his own bowling and is absolutely elated that his performance let the team into such a strong position in the match before other bowlers finished the job in the third innings of the match. He was absolutely on fire during his spell of 5/58. He used the rough outside the off-stump to good effect, bowled the right line and lengths and eventually reaped the rewards for it.

"It feels really good like considering the occasion of the finals. Opposition was in solid position being on 120 odd runs for the loss of three wickets. They were also scoring at a good pace. So bowling at that time that too as good as I did and also picking up 5 wickets in the process was something special. That helped my team in lifting the Trophy as well. That was the best part of it."

Swapnil's name might be doing the rounds only since last season but he made his first class debut back in the year 2006 at the age of only 14 years. It was a record in itself. He was selected in Baroda's Ranji squad as a replacement for their injured left arm orthodox spinner Rajesh Pawar.

Swapnil was the highest wicket taker in the country back then at the U-19 level having picked up 30 wickets in 4 matches, which eventually led to his call up. He was such an asset that not only he played at the U19 level at 14 years of age but also ended up playing at the highest level of Indian domestic cricket as well.

Although it was like he was living a dream, it didn't last long. He was in and out of the team regularly due to his inconsistency in performance that followed soon after his debut.

"After Pawar became fit, it was always going to be him first. And I was also playing at the U19 level and those matches used to go hand in hand with Ranji matches. So, whatever Ranji matches I was selected for I played. However, I didn't do well also at that level during those days. My statistics were not good in the Ranji matches I played back then. At the same time I was playing for U19 and U23. I was going through a rough patch as well. I didn't pick wickets that much and neither scored runs. So that was the reason I wasn't there consistently in the squad."

He was also in the list of 25 probable players for the U-19 World Cup in Malaysia that India U19 team won under Virat Kohli's leadership. Unfortunately, he was not in the final squad. However, he only got to know after the World Cup that he was in the probable's list. So that helped him a bit to deal with that news and the disappointment of not getting selected.

But then he started falling out of favour and by 2010, he found himself way down the pecking order of players playing for his state. He was not even in the top 30 players of his Ranji side and that was when he became determined to turn it around. "That actually hit my ego and self respect very hard. I concentrated on improving both my batting and bowling. That helped me to rediscover myself as a player. When I came back to our Ranji Side in 2014-15 season I did well in both batting and bowling," Swapnil admitted.

He came back really well. He did a good job with both bat and ball in the Ranji Trophy in his comeback season and also went on to claim his best T20 figures of 4-0-19-6 in a match of the 2014-15 Syed Mushtaq Ali Trophy that followed.

That helped him to get into the limelight and T20 scouts had their eyes on him since then. Results were seen in the very next season when Kings XI Punjab picked him for INR 10 lakhs in the auction of 2016. It was his second IPL stint after being picked by the Mumbai Indians during the inaugural edition of IPL as a 17-year old.

Although he didn't get any game time during that season, he played five matches for Kings XI Punjab across two seasons. But he didn't do that well and thus lost his place in the side in 2018. He has just one wicket and 12 runs to his name in five IPL games. However, that doesn't affect him much now as the experience with Amla has helped him become a better player. He thinks that he needs to continue the good work that he is doing now.

"The way I am playing now I don't think I need to do anything extra. I had a great domestic season last year in all the three formats. Stats are there to be seen. Stats don't lie. So I need just the right opportunity now," said the Baroda all-rounder.

He was the highest run getter for Baroda in Ranji Trophy last season with 565 runs to his name in 6 matches at an average of 62.77. It also included two centuries. And as far as his bowling his concerned, he was the second highest wicket taker for his team with 20 wickets at an average of 24.50.

And now he has kicked off this season in such a positive way as well with a match winning performance in Duleep Trophy final. He believes that things can only get better from here. He is finally blossoming into the all-rounder that people always expected him to be. His goal is to take his game to the next level.

"This is just the start. I don't know what the season holds ahead for me. But the only thought that runs in my mind us to take my game to the next level. If you are good enough, you will be picked by any side. I just want to be the best in whatever I do. Things have started on a positive note now. So hopefully it will get only better from here on."