Report News
Home > Sports > EXCLUSIVE: Khaleel Ahmed wants to be the best all the time

EXCLUSIVE: Khaleel Ahmed wants to be the best all the time

"My main motto has been that whichever team I play for, I have to be the best bowler for the side. I always have this habit of being the best all the time. So this drives me," says Khaleel Ahmed. 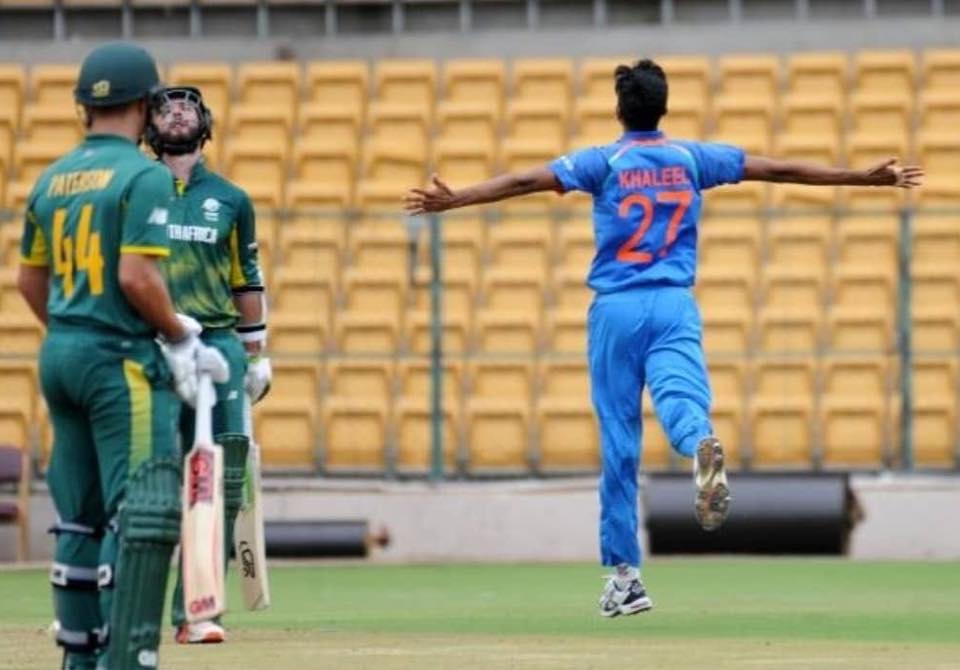 When the Indian squad for Asia Cup 2018 was announced, there was a newbie in the list whose call-up surprised everyone. It was Khaleel Ahmed, the left-arm seamer from Rajasthan, who was picked on the back of good List-A performances. In fact, his selection arised more out of India's search for a left arm seamer to provide variety to their bowling unit for their World Cup campaign next year.

"Yes, there are 2-3 slots that we are yet to finalise. One is a left handed seamer's slot where we are looking at Khaleel" were the words of chief selector MSK Prasad while speaking to the press on September 1st. He has eventually been named in the 16-man squad and is looking forward to it as an opportunity to perform and learn at the same time.

The 20-year old, in an exclusive interaction with CricXtasy, opened up about his bowling lessons from Rahul Dravid and Zaheer Khan, the priceless moment when his name was there in squad and more. Here are the excerpts from the interview.

What are your main strength areas you are working upon ahead of Asia Cup?

Regarding my strength in bowling, I am very aggressive. I can also handle pressure situations. My speed is key and the extra bounce I extract is my strength as well. I also feel that the variations I have is also the key. When a fast bowler uses his speed and variations together, then he becomes difficult to face. So, my speed, extra bounce and variations are keys for me.

How big has been the influence of Zaheer Khan in your growth and development as a bowler?

Yes, he has been a great influence on me as whatever I needed to ask from him, I used to ask and he himself used to give me tips as well. When you talk to a legend like him, who has taken so many wickets for India, it itself is a huge experience. The things he used to say to me, I used to take them seriously and I applied them in my bowling. So, when you get experiences like this, you tend to mature as a bowler. The faster you get maturity in bowling, the better it is for you. And you stand out as well due to maturity. So, on the whole, it was really great that I got to spend time with him.

Rahul Dravid has been with you since your U19 days and you were with him during A team as well. How crucial has been his inputs?

His inputs have been crucial. When I was there with him in U19 World Cup 2016, he used to say that whoever the opposition is, how many wickets you take or you go on to win the tournament, you have to learn something from here. When your coach speaks to you like this, that you learn from here and improve that in your cricket, then the pressure of performances goes away from your head. So I used to bowl in nets and in matches with a free mind. And he used to tell that how to maintain your body and other things like this. I played my U-19s under him and I did well, though my U-19 World Cup wasn't that great, but I also worked hard and there was no pressure from him. He gave me a free hand as you are here to learn and my performances also went well.

How have you kept yourself motivated despite cricketing activities in Rajasthan coming to almost a standstill or halt?

The thing which we have learnt from Rahul sir, by seeing him, the legend he is, is that sometimes in practice sessions, we had less things and he used to work out and manage the sessions somehow. Because ultimately we have to practice and have to learn from the sessions without complaining, otherwise it will be our loss. The thing which I learnt from him is that when things aren't happening, a human being has to still work and if you complain about the problems, then your work won't happen. Work out with the resources you have in your hand and always try to give your best because a human being has to go ahead all by himself and that too without complaining.

What was the scenario, the reaction in your home when your name was announced in Asia Cup squad?

I was doing my packing and I was being told that your name will appear in squad to be announced on September 1. Then suddenly I was getting congratulatory messages and calls were coming. So I was shocked and I asked that what has happened. Then someone said that you have been selected for the squad for Asia Cup. I quickly saw the squad and I was very elated that my name was there. I hugged my mother, who was helping me with the packing. My coach, Imtiyaz Ali Khan, who was a little bit outside the city, came in his car quickly to my house and my father also came in quick time. And they all were so so happy that it (that particular moment) was unexplainable in words.

What has been the main motto which has fuelled you all the time?