Ravindra Jadeja had scripted a resurrection – a resurrection for his team when they were looking down at the barrel. But it was also a resurrection of his place in the squad as the probable first-choice spinner and all-rounder in the side. 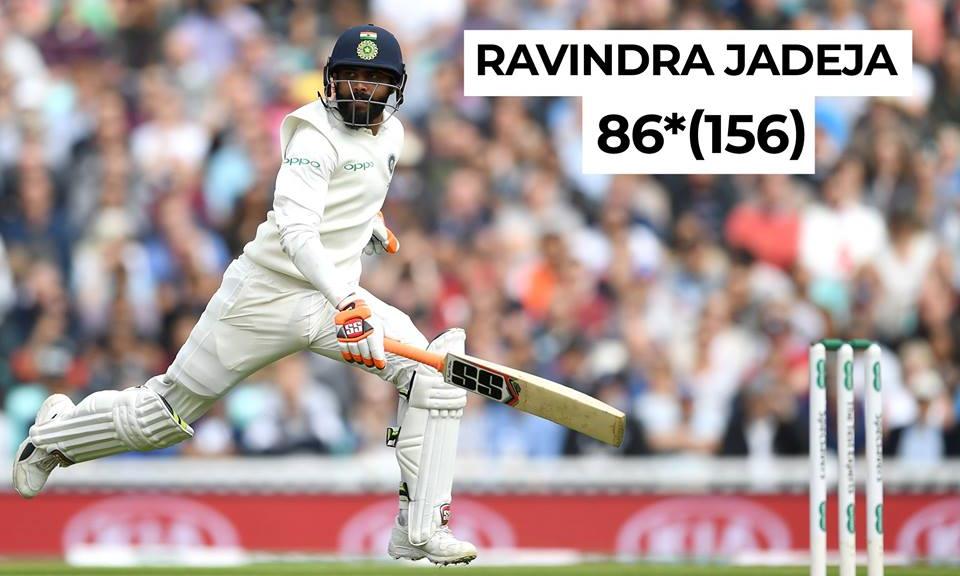 India's lower order has had a harrowing time surviving and scoring in comparison to England whose tail-enders have made merry against the Indian attack. The difference has been so vast that it has led the scoreline to read 3-1 at the end of four tests despite India's bowlers doing decently well.

Hence, for the fifth Test Kohli brought in an extra batsman in Hanuma Vihari to strengthen his team's lower order. But he was forced to make another change too – Jadeja in place of Ashwin, who had picked up an injury in the Southampton Test.

India were once again on the precipice of getting wrapped up after Kohli's wicket when they were 154/5 in response to England's 332. But two players who were picked in the XI for the first time in this tour put up a valiant fight.

Both debutant Hanuma Vihari and Ravindra Jadeja showed great temperament while countering spells of top notch swing bowling from Broad and Anderson. They stitched a gritty 77-run stand. Even after Vihari's vigil ended, Jadeja looked unscathed. He shepherded the lower order while playing his trademark cuts and lofts.

But it was his six off James Anderson that resonated the fact that he was putting something special on display. That he had hit the second-most successful seamer of all-time straight over his head in the second over of a new ball made a statement.

Ravindra Jadeja had scripted a resurrection – a resurrection for his team when they were looking down at the barrel. But it was also a resurrection of his place in the squad as the probable first-choice spinner and all-rounder in the side.

When the Saurashtra batsman hit Moeen Ali for a four to bring up his fifty, he dusted off his bat (as if saying that he was unfairly being kept out of action) and swung it in his own Rajputana style. The sword was once again out of the sheath as its master had made a defeaning comeback.

It was the same ground where he was criticised for his outing in the Champions Trophy 2017 Final. He returned to the Oval, this time donning the whites and scoring 86* to save his team. For Ravindra Jadeja, life had gone full circle.

'Sir' Jadeja as he is lovingly called after scoring 3 first-class triple hundreds did for once vanish India's lower order problems too. He helped India squeeze out 132 runs from the final 4 wickets with 55 of them coming with the less batting-competent final three. Before this game, India's final four had managed just 210 runs and only faced 413 balls in comparison to England's last four batsmen who had produced 411 runs and played 734 balls. But Jadeja's defiant innings has somewhat bridged the gap between the two sides and India's final four tally now stands at 301 runs.

Jadeja's 86* minimized the deficit to a more manageable 40 runs. His grace-saving knock was preceded by a 4-fer in the first innings. The last time an Indian player had an 80+ innings & 4 wickets innings haul in the same Test in SENA countries before Jadeja today was in 1992 at the MCG. The player to do so was the current coach Ravi Shastri.

India have been robbed of wins in this series because of certain Buttlers and Currans coming unannounced and putting England on the brink of victories. India would have looked enviously at these all-rounders, unknown of the fact they had one of those in their own arsenal all along.