It was all England and they are in the driver’s seat at the moment. It has been a familiar story throughout this series for India and they need their lower order to resurrect them and take them close to England’s total. 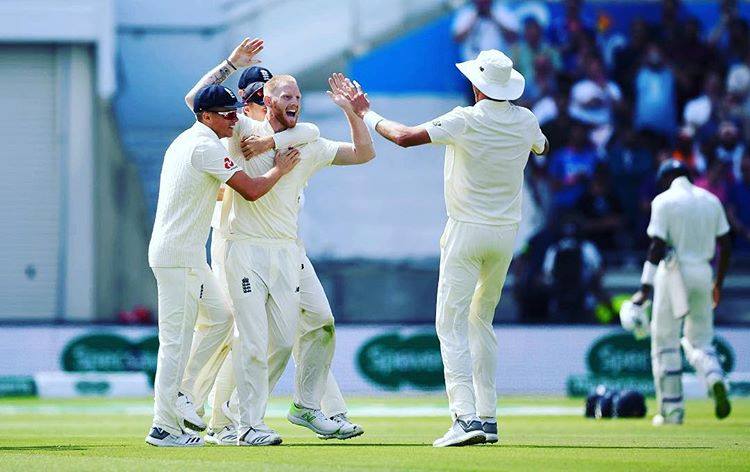 It has been an all too familiar story for India in this Test series. They blew away the England top-order and had them on the mat before the last three wickets took the hosts to a good first innings total. 181/7 to 332 all out!

And then the familiar collapse with the bat. None of the top-order batsmen took up responsibility and batted long. Skipper Virat Kohli once again top-scored (49) but even he fell trying to force the issue. At 174/6, they are behind big time.

At 198/7 at the start of the day, England would've hoped to bat as long as possible. However, Jos Buttler batted beautifully along with the Adil Rashid first (briefly) and then with Stuart Broad just not to defy and frustrate India but also to extend England's score beyond 300, something which looked quite far when the 7th wicket fell.

The Buttler-Rashid duo played out seven overs before Jasprit Bumrah got one to nip back and caught Rashid on the crease. Ishant Sharma uncharacteristically looked lacklustre in the morning, but Mohammed Shami continued to run in and beat the edge. He had both Buttler and Broad in strife but just couldn't find the edge or the wicket.

Buttler and Broad continued to frustrate the Indian bowlers as they scored runs at a decent rate. Buttler brought up his 5th 50+ score of the summer as he led England's fightback. Broad (38) complemented him really well as the duo shared a 98-run stand for the 9th wicket. It took a special catch to break this partnership. KL Rahul took an excellent catch at mid-on running back to dismiss Stuart Broad.

Birthday boy, Buttler then threw his bat at almost everything and struck a couple of sixes before Ravindra Jadeja finally wrapped up the innings as he had the former caught at slip for 89. England ended up with 332 which was a really good first innings score. Jadeja finished with a four-fer while Ishant and Bumrah shared three wickets apiece. Shami bowled 30 overs and would've easily gone past the bat on more than 25 occasions but was unlucky not to get a wicket.

India, in reply, had a bad start as they lost Shikhar Dhawan in the second over as Broad trapped the left-handed opener right in front. KL Rahul then played a few aggressive strokes, lofting the ball over the infield before he settled down. India went into Tea with both Rahul and Cheteshwar Pujara looking fairly comfortable.

But everything changed after Tea, just like yesterday. Rahul got a peach from Sam Curran as he was squared up and was bowled for 37. Virat Kohli walked in at 70/2 and once again looked good. Along with Pujara, he looked to drive the innings forward before James Anderson bowled a superb spell.

England's premier pacer didn't try anything fancy. He ran in and consistently hit the right areas, got the ball to move both ways and was rewarded with the wickets of Pujara and Ajinkya Rahane. Both batsmen poked at away-going deliveries and India from 101/2 were 103/4 with Kohli once again stranded at the other end.

In walked debutant Hanuma Vihari at No. 6. He looked quite nervous as he struggled for the first 25-odd deliveries. He survived a couple of close LBW calls. England didn't review one and the other which they reviewed turned out to be going over the stumps. He then top-edge a couple as well, one which went for six and the other fell short of fine-leg. During his unbeaten 50-ball 25 so far, he did hit a couple of convincing drives but was largely nervy during his stay.

Meanwhile, Kohli at the other end, continued fluently as he raced into the 40s and was once again key. But late in the day, England got the wicket they needed as Kohli edged one off Stokes to Root at second slip and India slipped further. It was a body blow for India as the man who had bailed them out on multiple occasions this series was dismissed and they were still a long way behind.

Rishabh Pant came and went quickly as well as Stokes got his second wicket when Pant edged one to Cook at first slip. Vihari and Jadeja then safely negotiated the next couple of overs and took India to stumps at 174/6.

It was all England and they are in the driver's seat at the moment. It has been a familiar story throughout this series for India and they need their lower order to resurrect them and take them close to England's total.