Chris Woakes was awarded the man of the match for his spectacular overall performance. He scored 137 not out and took 4 wickets in the match. 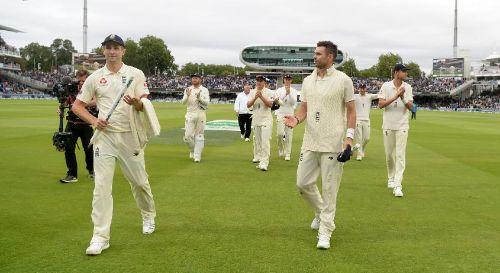 The disaster run for Indian cricket team continues in England.

England declared innings after scoring 396/7 taking a massive lead of 289 runs. Returning all-rounder Chris Woakes was the batting star and scored his maiden test hundred. He has now his name Lord's honours board for batting and bowling. He was well supported by Jonny Bairstow and Sam curran who made 93 and 40 respectively. The Indian batsmen had a huge score to beat in front of them. In this series, the batting of Indian cricket team has been disappointing. India lost by an innings and 159 runs. England leads the five match series by 2-0.

Here's how fans and cricket personalities reacted on their social media handles:

The Anderson and Broad show

Speedsters James Anderson and Stuart ran through the Indian batting line-up. They both were just too much for them. Both Broad and Anderson took four wickets each. Their display of swing and pace bowling was one of a kind and a treat to watch. Anderson removed openers Vijay and Rahul ( again) and tailenders Yadav and Shami while Broad took crucial wickets of Pujara, Vice-captain Rahane, skipper Kohli and Wicketkeeper Karthik. They were well supported by Chris woakes who took two wickets. Anderson took nine wickets in the match and now has 100 wickets at the home of cricket (Lords) and 553 test wickets. He is only 10 wickets behind the great Glenn McGrath who has 563 test wickets.

Here's what both captains said after the match:

"Not proud of the way we've played. First time in the last five Tests that we've been outplayed. We deserved to lose this game, the way we went about things. Can't really think about conditions when you're playing the game. You can't sit and crib about these things. Sometimes the rub of the green won't go your way.

Even when the ball's doing a bit, you have to pitch it in the right areas. Their guys were relentless, they made us work for the runs. Yeah looking back, I thought we got the combination wrong".

"The bowling unit were exceptional throughout. We had the conditions in our favour, but we had to put it in the right places. Jonny and Woakesy were magnificent. Really pleased for Woakesy. A number of times he's showed how talented he is. He's been working hard. Coming back into the side, someone who's always been a big part of the side. Good to see.

Ultimately it was about doing the same things again and again. We're in a nice position. I thought he [Pope] played really well. To come in and put pressure on the opposition in a tough batting period was good.

We've got another day to rest and recover and get our heads around what we've done this week. We still haven't played our best game."

The Indians have a lot to prepare for the third test. They have to analyze and take good decisions. If India loses next match, then it loses the series. The third test will take place from 18th to 22nd August in Nottingham.