Independent wrestlers Cody Rhodes, Nick Jackson and Matt Jackson (young bucks) announced the biggest ever independent/non-WWE pro-wrestling ‘ALL IN’ on their youtube channel. 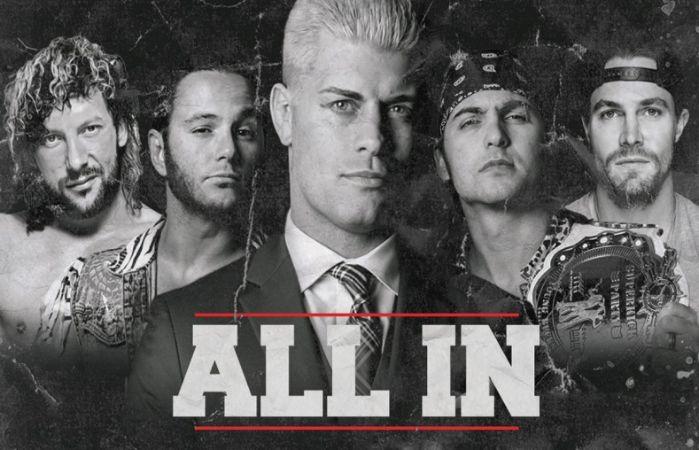 Independent wrestlers Cody Rhodes, Nick Jackson and Matt Jackson (young bucks) announced the biggest ever independent/non-WWE pro-wrestling 'ALL IN' on their youtube channel. Wrestling fans all over the world rejoiced;

This is a really big deal. #AllIn pic.twitter.com/IqR1cjmTFa

Excited to be attending #AllInWrestling event in Chicago in September

The event is financed by Cody and the Bucks and will take place on September 1st, 2018 at the Sears Centre arena in Chicago suburb of Hoffman Estates, Illinois.

The event will feature some of the biggest independent names from promotions like NJPW, ROH, PWG and more. Wrestlers such as Kenny omega, Cody Rhodes, Young buck, Kazuchika Okada, Rey Mysterio and many more are already confirmed for the show.

The event is touted as a huge deal for pro-wrestling as it is the first major non-WWE show.

'We've put a lot of work in. Now it's like, all right, we've got to try to enjoy some of this. What we are doing is pretty big," said Nick Jackson on their youtube channel 'Being the elite'.

🎼there's something happening here, what it is ain't exactly clear🎼

This went from being an outlaw live event to a 4 day destination w/a tv partner like WGN America that reaches 77 million homes. I can't define what this is anymore

We will do the work. We will make this matter pic.twitter.com/hRw0v9PNbk

Rhodes and Bucks are part of the world famous wrestling faction 'Bullet' Club'.

The tickets of 'ALL IN' were sold out in less than an hour after going for sale.

This is the first non-WWE event in the United States to sell 10,000 tickets since 1993. The young Bucks, Omega and Rhodes live by the motto 'change the world' and they certainly are.

Matt Jackson took to his social media handle to express his happiness.

We did it. #AllIn

The landscape of pro-wrestling is changing and it is changing very fast. WWE is no longer the 'big leagues'.

Wrestlers like Kenny Omega, The young bucks and Cody Rhodes have shown that you can have fame and success outside WWE. Wrestlers are going for promotions such as New Japan Pro Wrestling (NJPW) and Ring of Honor (ROH). Infact, wrestlers are leaving WWE and looking for other options. Next year, G1 Supercard, a joint show of ROH and NJPW will take place on April 6th, 2019 in the world's most famous arena Madison Square Garden.

Hollywood Actor Stephen Amell, a huge pro-wrestling fan will also wrestle at 'ALL IN'.

ALL IN match card

Rey Mysterio, Bandido, and Fenix vs. The Young Bucks and Kota Ibushi

The Briscoes vs. Frankie Kazarian and Scorpio Sky

More matches are expected to be announced.