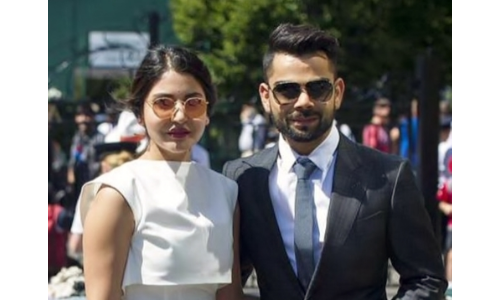 Virat Kohli tweeted that the presence of his wife Anushka Sharma had made the award-winning evening even better.

Captain of the Indian cricket was bestowed with the Polly Umriger Award by the Board Of Control For Cricket In India (BCCI) on Tuesday, June 12, 2018 suring their annual BCCI awards ceremony in Bengaluru.

The board also tweeted 'The Skipper also receives the Polly Umrigar Award for his stupendous performances in the 2017-18 season too'.

As the social media and fans started wishing the captain, an emotional Virat Kohli tweeted that the presence of his wife Anushka Sharma had made the award-winning evening even better.

"I congratulate all the winners of the BCCI Annual Awards. The last two years have been fabulous for Indian Cricket with both the men and women's teams doing very well. We are proud of their achievements and this is our small way of acknowledging their on-field efforts," Committee of Administrators Chairman Vinod Rai said.