Autopsy: The big three and their big batsmen

'Test cricket' is an apt name. It is a test of your cricket skills over an extended period of time. 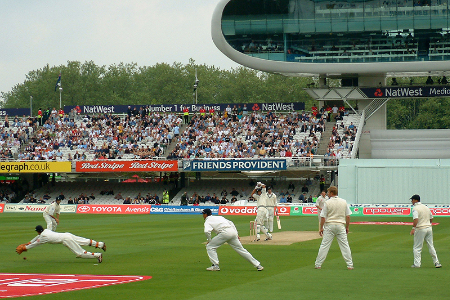 'Test cricket' is an apt name. It is a test of your cricket skills over an extended period of time and unlike the limited-over formats, test cricket has so many contests within a match that there is a chance of a clear winner being decided over the period of five days. So given the format is the ultimate skill of resolve and the design is such that the bowlers are the ones who are attacking while the batsman defend, a batsman is more likely to fail.

The average number three or four batsman scores 37 runs per innings. Usually this is suggested as the base average by which people should expect a number three or four scores in an innings. Anything lower and it is deemed a failure. But for all the number 3 and 4 batsmen to have played since 1st October 2014, the median score -- which is the midpoint of the dataset -- for a batsman is 21 runs, which means half the batsmen batting at 3 or 4 have scored 21 runs or fewer in their innings. The average batsman fails a lot in Test cricket, the runs per innings is 37 because that number is stretched by the fact that once a batsman is set, they score lots of runs.

But there are some Test batsmen who do better than the average batsman, so much more better that their median score is far higher than the average batsman. Let's talk about the three best batsmen from the Big 3 nations - Steve Smith, Joe Root & Virat Kohli. The reason all the stats is from 1st October 2014 is 'cause it is after this date where these three batsmen became the batting mainstay for their sides - they average 50+ in this period.

Let's look at this one by one.

Since 1st Oct 2014, he has scored 61.25 runs per innings. That's a lot on it's own. His median score is 40 though, so exactly half his scores are above 40. In a Test match, where you have the assurance that your batsman will score at least 40 in one of the two innings, it's a huge bonus for any batting side.

But once Steve Smith is set he ensures that he scores big, with 48.8% of his scores past his median of 40 ending up in centuries. As a bowling side, you either get rid of Steve Smith early on or you pay heavily.

In the chart above it can be seen how Steve Smith is unshakeable when he crosses 60 runs, just 8.9% of all his Test innings are between the scores of 61-100. The average batsman gets out 10.2% of the time in this phase.

Steve Smith's batting is defined by the fact that a lot of his low scores are just a blip to his overall performance, he is guaranteed to not fail like the average batsman and once he crosses his median score he ensures that he makes his start count.

Such a low difference in these two numbers signify that a lot of Root's innings are close to the median and he does not have too many high scores. A main reason this is his lack of centuries, his poor conversion rate is an issue which has been discussed a lot these days.

Joe Root's start is not an issue, a median score of 40 is good for any player in the world given the median for the average batsman is 21 runs. But what Root does after he crosses 40 runs is a worrying sight for him as a batsman. And given how England's batting has become uber dependent on him, his failure to convert his scores into centuries is magnified. The English batsmen don't score a 50 as often as Root does, and when they do they do not convert it as much as the other sides in the world do.

The reason for Joe Root's low runs per innings (48.02) despite his median score being 40 is well depicted in this draft. Once Root gets past 40, he does not make many centuries, with just 17.7% of his innings with 40 or more runs ending in three digit scores. The average batsman scores a century 31% of the time they go past 40 runs. The inability to score those big scores is a huge reason for his low runs per innings.

A quarter of Root's innings end between the scores of 61 & 100, a phase in which a batsman's innings ends only 10.1% of the time. That's 2.5 times worse than the average batsman, a huge cause of concern for Root that he loses his wickets at this stage, a stage when batsmen buckle down and look to make their start count by scoring a century.

Virat Kohli's numbers since his torrid tour of England has seen him became a formidable Test batsman with runs in every condition. He even got the monkey off his back by scoring some tough runs in England.

But there is one flaw in Kohli's game -- well not a flaw exactly, but he would consider it one for his high standards -- and that is his vulnerability early in the innings. 40.3% of all his innings ends between 0-20 runs. This is better than the average of 49.1% but for a batsman like Kohli these are bad numbers. So his weak zone is basically the first 20 runs of his innings, a phase he usually looks to assert his dominance by getting bat on ball, which leads to lots of dismissals in the slips or by getting him to hook the ball.

But once Kohli gets past the initial phase of 0-20 runs, he is a beast of a batsman. His next most vulnerable stage is between 41-60. In the other stages he gets out lesser than the average batsman.

Once he crosses 40 runs in an innings, the next time you can get him out is once he scores his hundred, 51.51% of all his innings past 40 runs have ended up as centuries, this shows his tendency to grind the opposition once he is completely set.

With Kohli, it is simple. He is vulnerable early in his innings in this regard he is closer to the average batsman when it comes to failing, but once he is past that initial phase he becomes a different batsman, a batsman better than the rest and who is relentless in his pursuit to demolish the opposition.