A new virus has taken the lives of atleast 10...

A new virus has taken the lives of atleast 10 people in Kerala in South India. It is the Nipah virus. Around, twenty others are under observation in two districts of Kerala with suspected symptoms, which include headache, fever, vomiting and dizziness, mental confusion. With 24 to 48 hours, the symptoms lead to coma.

Fruit bats are natural host of the virus but in the past it has spread through pigs. But it can also spread from human to human.

There is no vaccine for the virus yet, so prevention is the best option in this scenario. 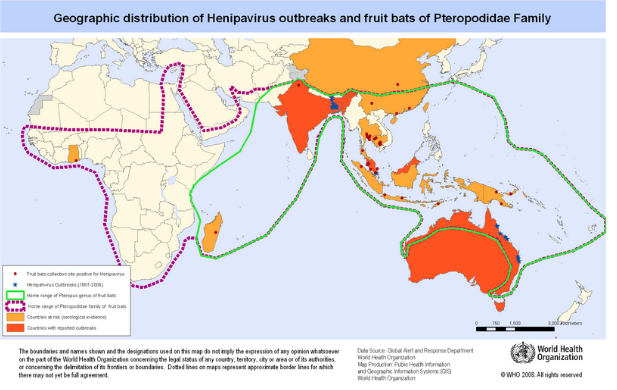 Avoid any expo sure to sick pigs.
Do not drink raw date palm sap as that may be contaminated with fruit bat urine or saliva containing NiV.
The infection was first identified in 1999 during an outbreak of encephalitis and respiratory illness among pig farmers and people with close contact with pigs in Malaysia and Singapore.
Until now the disease has been identified to only two districts in South India. The Indian government is working on an action plan on how to keep the disease localised.
Tags :nipah virus   , kerala   , nipah virus spreads to kerala   , india   , ministry of health   , no vaccination
Follow