Last few years have seen an attempt at obliterating most of the Muslim dominant literature and rebranding events from the recent past. Is wiping the bygone era the road to progress? Can history be altered in school rooms? 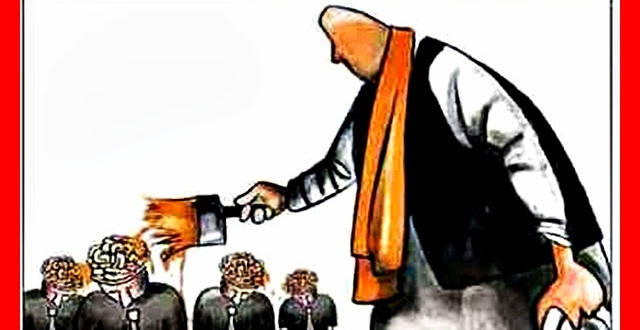 In 2017, the Priyadarshni Puraskar Yojana was renamed as the Padmakshi Puraskar Yojana in schools of Rajasthan. Not just that, the award ceremony held every year on the birth anniversary of Indira Gandhi on 19 November is now planned for Hindu festival of Basant Panchami. Last year also saw an attempt at obliterating most of the Muslim dominant literature from the past. Is wiping the past the way to progress ahead? Can history be altered in school rooms? Is it tilting our vision from the left to the right wing?

Repainting history
The year 2014 marked a significant change in our nation, this change was not only political but highly educational and institutional in nature. From various policies or yojanas, our education system also witnessed many changes. Similar changes had taken place in Rajasthan during the tenure of the BJP government, which introduced many such changes in the state's institutions. After the recent state polls held in Rajasthan, Congress has come to power and is coming up with new education policies aimed at changing the education system back to what it was. These policies include changes in the content of textbooks, the colour of the students' uniforms and certain other arenas.

A high-level committee, State Institute of Educational Research and Training (SIERT), is going to change the syllabus for Classes 1 to 8 and another committee set up by Rajasthan Board of Secondary Education (RBSE) for syllabus reforms will make the amendments for Classes 9 to 12.

In a major change to the syllabus of school students from class 1 to 12, the Rajasthan government has decided to bring a new syllabus in the next academic session.

A different angle of saffronization had come to light when the BJP-led Gujarat government came under fire for asking schools to ensure that students respond with 'Jai Hind' or 'Jai Bharat' during roll call instead of the customary 'yes sir', with the opposition arguing the move will 'not change the quality of education'. The notification, issued by the Directorate of Primary Education and Gujarat Secondary and Higher Secondary Education Board (GSHSEB), lays down that students of classes 1-12 in government, grant-in-aid and self-financed schools will have to respond to the attendance call with 'Jai Hind' or 'Jai Bharat' starting January 1.

The main objective of the new move is to 'foster patriotism among students right from childhood', the notification said. Even as the BJP and opposition parties engage in a verbal duel over the propriety of the move, students while speaking to PTI seemed to have no issues with the new directive.

Union minister Smriti Irani subsequently rejected the opposition's criticism of the Gujarat government's directive to schools to ensure that students responded to roll call with 'Jai Hind', and said she would celebrate the country's prominence by saying 'Jai Hind'.

"Speaking as an MP from Gujarat, if you are saying the Opposition's contention is that by saying Jai Hind you are being regressive then I would rather embrace my nation and celebrate its prominence and say Jai Hind," Irani said while replying to a question on the Gujarat government's directive.

With recurring changes in the sector of education, the politics around education seem more pronounced today. The aim of this style of politics is to directly instill in young minds the agendas and policies of the ruling government and thereby stifle free thinking. This will purposely hamper the quality of education in our country. Education is supposed to be factual. With the recent verdict of the Supreme Court on making National Anthem mandatory in cinema halls, are we now going to appeal for decree in class rooms.