On Wednesday, Jan 2 , 2019, authorities reopened Kerala's Sabarimala temple in Kerela, an hour after they shut it down for purification rituals, following the entry of two women under the age of 50 inside the sanctum. Which Gods need cleansing? 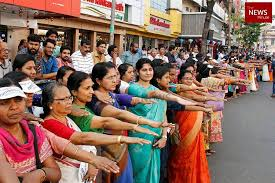 The women entered the hill shrine around 3:45 AM early Wednesday morning, and were identified as Bindu, a college lecturer and a Communist Party of India (Marxist-Leninist) Liberation (CPI-ML) activist from Kozhikode district's Koyilandy, and Kanaka Durga, a civil supplies employee from Angadipuram in Malappuram. The women arrived at Sabarimala on December 24, 2018, amidst protests against the Supreme Court ruling pronounced by a 5-judge bench that recognized women's right to worship at the temple. Protestors claim that the restriction for women of menstruating age is in order to maintain Lord Ayyappa's celibacy vow. Millions of devotees make a pilgrimage to the temple in Kerala annually, which barred women between the ages of 10 and 50 from entering.

The Sabarimala Karma Samithi called for state-wide shutdown today. Shops and markets remained closed since the morning, and public transport was stopped. Only a few private vehicles occupied the road. Protesters pelted stones on buses of the Kerala State Road Transport Corporation in Kozhikode and Malappuram. News agency IANS reported that there was poor attendance at the IT parks in Thiruvananthapuram and Kochi .

Women's wall to block patriarchy
On Tuesday, Jan 1, 2019, marking a new beginning to a new year, around 5 million women from various parts of Kerala gathered together to form a women's wall, a chain of women that stretched from the northern of Kasaragod to the southern end in Thiruvananthapuram. Organisers had earlier predicted a turnout of about 3 million. The protest by women was to combat inequality and counter the pressure put by right-wing groups to enforce the ban in defiance of the Supreme Court orders.

The opinion board
Women's entry was confirmed to the public by Chief Minister Pinarayi Vijayan, who stated that the police were given orders to provide "all possible protection to any woman who wants to enter the temple." The Bharatiya Janata Party's Kerala president PS Sreedharan Pillai has called for protests.

Rahul Easwar, activist and leader of the Ayyappa Dharma Sena tweeted, 'We condemn this Leftist drama, 2 young women came through staff door with help of police and Kerala CPM government totally covering up They were there from 3.48 to 3.50 (as claimed by media). Necessary steps will be taken by Tantri #SaveSabarimala'.

"They might have done that in absolute secrecy. Once we know details, we will take appropriate action," said Rahul Easwar , activist and leader of the Ayyappa Dharma Sena.

Playing the religion card, BJP State President Sreedharan Pillai said, "This is an attack on devotees by atheist people. The CPI(M) has planned all this, they will never win. History will be witness to their loss. We will protest strongly, we will demand the resignation of the Chief Minister."

Leader of opposition and Congress MLA, Ramesh Chennithala, reacted strongly, "The CM's obstinacy has been enacted. This conspiracy has been undertaken with the intention of hurting and insulting all religious people in Kerala. Police took the two women into custody with no 'irumudikettu' (holy bag of offerings carried by Ayyappa devotees), to Sannidhanam. It was an obstinate desire of the CM to get women into Sabarimala. Yesterday, they did the Women's Wall with this intention. But no one imagined that they would take women into the temple at night the very next day. Now we all know why they held the event. It has hurt the minds of all people who believe, and this was a grave error."

The review petition against the Supreme Court verdict is all set to be heard next week. And like in several cases pending with the Apex court we wait with baited breath to inhale the democracy we dream to be. This controversy is not dying any time soon and will open a can of worms questioning the virtuosity of tainting the creator by his subjects, legitimacy of offerings in temples, and cleansing of an idol and not the minds.