No End in Sight For Hong Kong Protests

While China is just a week away from celebrating its 70th anniversary, the situation in Hong Kong is still delicate with an identity crisis, looming economic loss and absence of public order 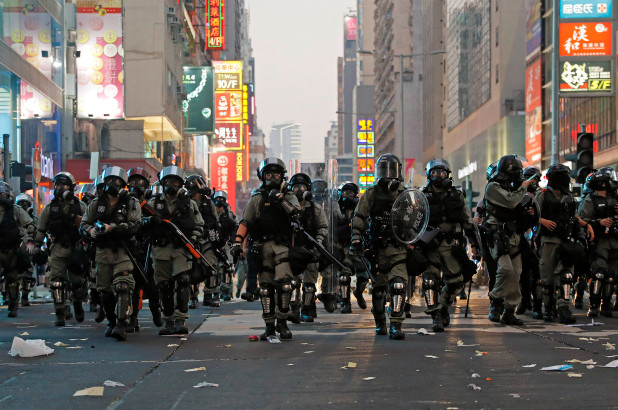 Hong Kong protests are heading to the 16th successive week now, with less than a week left for Oct 1, which is the 70th anniversary of the People's Republic of China. Tensions are still riding high in the Hong Kong territory, and no end to this misery is in sight for the protesters.

Protesters have started taking on streets in massive numbers recently police clashed and threw gasoline bombs. Protestors were in return throwing bricks, gasoline bombs and setting fires in the streets. Later in the night, protestor's hundreds of demonstrators decamped to a shopping mall.

This year Carie Lam is heading a delegation to Beijing for National Day Celebrations no pan-democrats are invited to join the trip. After serious protests this year, many pro-democrats names are missing in the list. Beijing did call pro-democrats in 2004 and 2009 but later the rising demanded for democracy in the city. Beijing has taken stringent measures to avoid pro-democrats from the legislature to every small political event in the country.

On September 4, Hong Kong chief said she would implement one of the demands to withdraw the extradition bill. In June, protests broke in Hong Kong against the decision of introducing the extradition bill now. The protester's hope augmented as the Chief Executive Carrie Lam Cheng Yuet-Ngor announced the withdrawal of the unpopular law. Protests lead to clashes between police and protestors later they attacked government offices created problems for the movement of public transport, protesters then assembled at the airport to stop access to Asia's important Travel Hub.

Back in February, the Hong Kong government introduced a Bill in its legislature made by Pro-China lawmakers and this bill would allow sending the crime accused to Beijing. Mrs Lam cited a recent issue where a Hong Kong resident killed his girlfriend in Taiwan as both countries doesn't have an extradition bill. Therefore, they can't send the accused to Taiwan for trial in the court of Hong Kong, but experts say this bill is to target pro-democracy people in the city. Hong Kong was a British colony for 150 years, and China gave up the city to British after the war in 1842 later, China leased the rest of the territory to the British for a period of 99 years. In the 1980s, when the lease period was near to end China and British came up with a deal then British returned the city in 1997 during the agreement; Hong Kong received a mini-constitution called "The Basic Law." One Country Two Systems gave the town many democratic rights. For example, freedom of the press and assembly. However, these rights will end in 2047, but China is not patient enough to wait until then.

A survey by the University of Hong Kong shows 71% of the city people recognize them as HongKongers, while only 11% identify as Chinese. The young generation in the city believes China has already started reducing bill powers. Pro-China leaders occupy most of the Hong Kong key positions in the legislature, disqualifying elected Pro-Democratic legislators. The disappearance of booksellers and a Chinese billionaire strengthens the claims of protestors.

Hong Kong police declared they arrested around 450 people since the protests began in June and fired 1000 rounds of tear gas, 160 rounds of rubber bullets. More than 200 flights halted, commuter trains disrupted, causing severe problems to the transport system, doors of subway cars were blocked, forcing millions to stop going to work. The stock market value of 622 billion has erased since July the second quarter of the city grew only at 0.6% this short term fall of economy fearing a recession. Last Year Hong Kong was one of the Worlds most visited cities with a total of 30 million tourists now due to protests tourism industry fell by 40%. Hotel occupancy has reduced to half, and decreasing visitors in luxury showrooms of the city is also affecting the economy. Hong Kong is facing a risk of outflow of capital and loss of talent.

These protests didn't stop after Mrs Lam agreed on the primary demand withdrawal of the bill now protesters demands have risen now they want Mrs Lam's resignation and a better democratic the environment in the city, but Hong Kong is paying the cost of the protests, the city being the financial hub of

Asia is raising fears of a trade war between China-USA affecting the exports. Mrs Lam must now start a dialogue between government and protestors, try to come up with a policy which can control the situation.