Google today remembered Gauhar Jaan India's first recording artist on her 145th birth anniversary by presenting a sketch of her in its latest doodle. 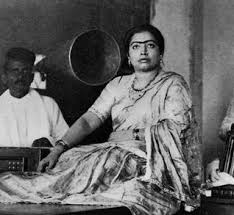 Google today remembered Gauhar Jaan India's first recording artist on her 145th birth anniversary by presenting a sketch of her in its latest doodle.

Gauhar was born on 26th June, 1873 in Azamgarh, UP. She was the first one to record music on 78 rpm (revolutions per minute) in India released by the Gramophone Company of India.

The doodle illustration was made by Aditi Damle showing Gauhar jaan with a cat and a rose in her hand and gramophone in the background. 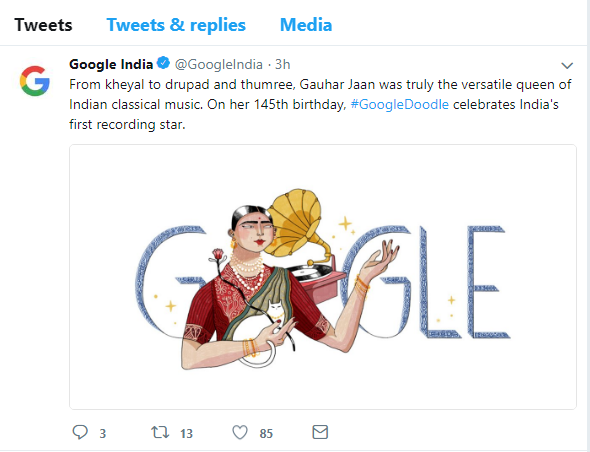 Gauhar's father William Robert Yeoward was Armenian Christian and her mother Victoria Hemmings was Jewish. After their divorce Gauhar alongwith her mother moved to Benaras where they converted to Islam. Victoria converted her name to Malka Jaan and Angelina to Gauhar Jaan.

According to NEWS18 reports, she learnt Kathak from the granduncle of renowned performer Birju Maharaj, Brindadin Maharaj and had lessons in Keertan from Charan Das.

The royal courts of Darbhanga Raj in 1887 witnessed Gauhar Jaan's maiden performance. Impressed by her finesse, she was appointed as a court musician.

The legendary dancer recorded more than 600 records between 1902 to 1920 across diverse languages including Bengali, Gujarati, Tamil, Marathi, Arabic, Persian, Pushto, French, and English. She was also called the "first dancing girl" in her records, who composed ghazals under the pen-name of 'Hamdam'.

Gauher was known for bringing her performances to a close by announcing "My name is Gohar Jaan", which was also the label of her first Indian album.