Doctors on indefinite strike across Bengal

Bengal doctors have started a protest after a junior doctor was attacked by 200 people. 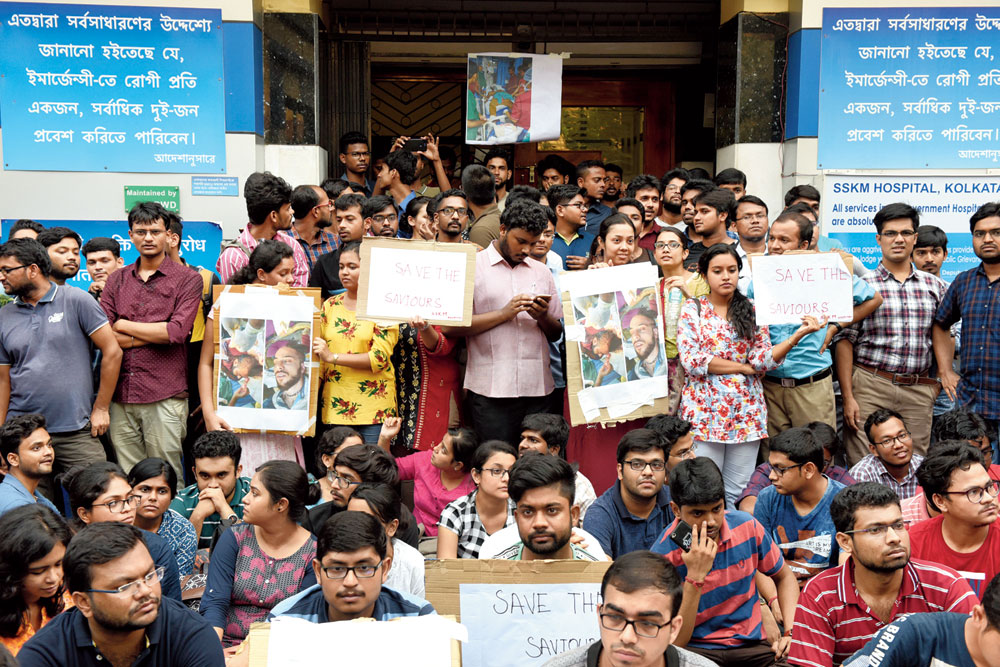 The doctors' protest erupted on Tuesday after an intern at the Nil Ratan Sarkar (NRS) Medical College and Hospital was allegedly attacked by the relative of a patient who died on June 10. The doctor who was attacked is reportedly admitted in the intensive care unit after she sustained grievous injuries.

Kolkata's Tangra resident, 75-year-old Md. Sayeed, died at the NRS Hospital on Monday night. The family members of the deceased patient staged a protest by bringing 200 people to the hospital to beat up junior doctors. They said that medical negligence by the doctors led to the death. During the protest, Pratibha Mukhopadhyay, an intern doctor, got seriously wounded as she suffered severe head injuries and is still in critical condition. She has undergone a surgery at the Institute of Neurosciences in Mullick Bazar.

The incident has triggered protests from doctors in other government hospitals across the state. Medicare services across West Bengal remained disrupted for the third day on Thursday as junior doctors in government and private hospitals continued their strike demanding foolproof security after the assault.

The medics put up posters and placards on the front gate and the walls of the hospital saying they were not against the services but needed security from being attacked.

West Bengal Chief Minister Mamata Banerjee served an ultimatum to the doctors while lashing out at them, saying that the government will take action after 2pm on Thursday if the doctors refuse to end the agitation. She called the strike a 'BJP conspiracy'. The strike still remains. West Bengal Health Minister Chandrima Bhattacharya said four persons have been arrested in connection with the case.

Protests By Doctors Outside Bengal

The Out Patient Departments (OPDs) in the Siliguri district hospital and North Bengal Medical College and Hospital remained shut on Thursday leaving hundreds of patients in the lurch. A parallel emergency system have been opened by the authorities where senior doctors will exam serious medical cases of the patients.

People on Twitter have created a hashtag "standwithNRS". Meanwhile, the doctors strike is getting boost from AIIMS colleagues in Delhi. The resident doctors here did their regular duty towards their patients, but wore helmets and bandages to symbolically protest against the violence against doctors in West Bengal.