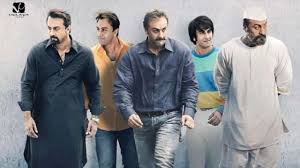 When characters and actors merge, what is served to the audience is a mega movie like Sanju. The other masala for magic on screen is Mr Chopra, Hirani and the Jingbang. The vibe of their cinema is different and it is evident in this one - loud enough! They are class and it's redefined yet again.

Sanju baba's life has been full of complications and controversies is what you begin to witness (way more than what we may have known). So much so that it stirs up a variety of emotions - detest, anger, sympathy, awe, inspiration.

The greatness of a role as played by the gifted talent Mr Ranbir Kapoor gets through our skin, since we as an audience are not able to isolate one from the other, his voice, his style, his walk, eyes.. everything. They say when you idolise someone you become like them at some point, is that why Ranbir looks a twin to Sanjay Dutt? Perhaps yes, adding up of course are his incredible acting skills. Hats off to him for pulling this off and making the movie far more realistic than what it may have looked otherwise. It is almost similar to Bahubali and Prabash being symbolic to one another! Also this one allows him to break his own stereo type of being a jilted lover in most of his flicks. So well done in all respects!

Diya Mirza with the mole on the face looks like the real life biwi (though prettier and a slimmer version). Eye for detailing is worthy of appreciation.

Sonam (Ruby - the love of Sanju) and Anushka (Winnie - the writer) both minor roles but are very important to the script as they lead to some of the landmark life transformations of the lead character, as the story unfolds. They justified their performance to a large extent.

Paresh Rawal (Sunil Dutt sir) -is very well played, one is not used to seeing him in Chopra films but it's not hard to identify with his pain and agony as a father, however initially one might not relate to the parent in him. The speech scene is exceptionally moving - kudos to both!

Manisha Koirala (Nargis Ji) - her brief yet natural delivery of the dialogues is impactful, that beautiful smile just lights up the screen. Other scene/song between the mom n son will move you for sure.

Vicky Kaushal (Kamli the friend!!) - In the movie, according to Sanju he has two gods, his father and his friend and just by virtue of watching his life (summed up in a few hours) one can say with conviction that it's friends like these, that uphold the meaning of friendship. Actor par excellence (be it Raazi, Lust stories etc.)

There is a very lyrical song is right at the end where both Sanjus do a jig — what a joy to watch!

No matter how much ever I wished to be a print media journalist, they deserve to be told - "baba kehta hai ab bas karo bas". It is essential that you buy a copy of the book - Kuch to Log Kahenge" (I most definitely will!)