Andhadhun is a good change from the routine but do not expect it to be the usual Bollywood thriller – Its Different…go Figure! 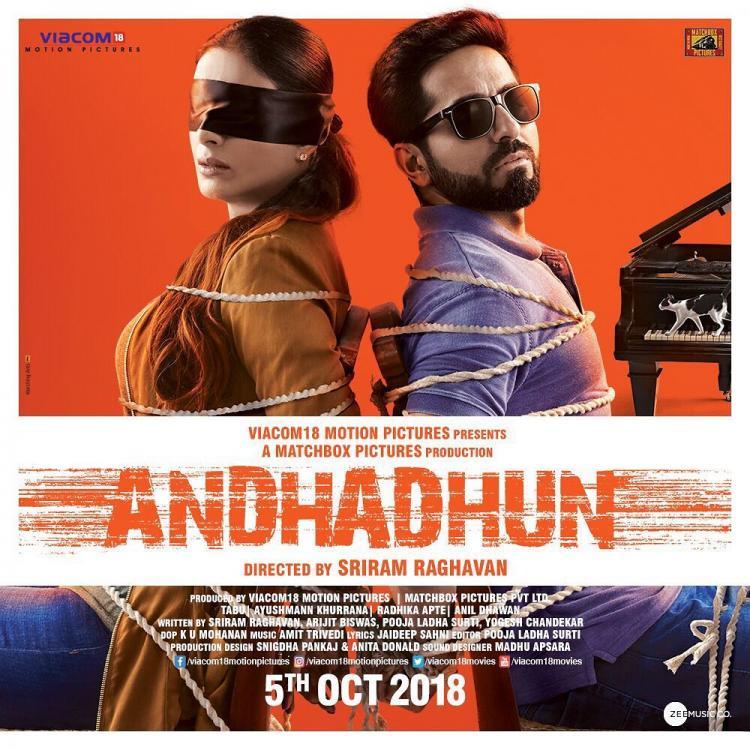 First things first – there could not have been a better name for a flick which has "blind man" playing music…literally! This was one awaited movie on my list and must admit the promo totally nailed it in terms of a great build up, enough for the cinema lovers to be excited and thrilled to watch this upcoming thriller.

Mr. Sriram Raghavan needs no fancy praises, he is what he is and brings his creative finesse to the work he does. This one does qualify as Sriram Raghavan's thriller but not to the extent I'd expected it to be.

Having said that - Andhadhun is indeed a breath of fresh air from the "newness of subject and its treatment" standpoint. I do believe this one marks for a genre – Thrillcom (much like the previous Horror comedy in Stree). What is exceptional about the movie (besides of course the brilliant talent and star cast) is how simply the script moves and the crazy (some predictable) twists and turns happen so effortlessly.

The biggest plus for Andhadhun is the talented actors. Ayushman has blessing in his name. Do I need to say more? Tabu is a charm of an actress just bringing any shade to almost a real life character. Radhika Apte is this underplayed natural actress who somehow has been shown in a great light in many a recent movies and serials. While she is great at what she does, in this one I feel her role was underused, there was a bit of unfinished vibe or maybe I was expecting a lot more. Anil Dhawan ji, brief & a light role did justice. Other actors faired well too. Some dialogues and their natural delivery will crack you all for sure.

Here is my take on what could have been better:

- Draggy first half: while one can imagine that there is a character building process it should also tee in to the overall script so at times you may not be able to snap out of one before you realize you're in the next one. The first half could be made more precise

- "Dhun"wise this one is disappointing not to suggest one should expect music in thrillers yet there is theme music which could have been leveraged well. This one anyway is not an out & out thriller like Ek Hasina Thi or even Drishayam from the same set of creative masters (to me those are epic movies in the thriller genre)

- The climax is a bit open ended, left to the imagination of audience - this may be a unique way to end an unconventional film won't resonate with the masses

Andhadhun is a good change from the routine but do not expect it to be the usual Bollywood thriller – Its Different…go Figure!