Report News
Home > Lead Story > Half the Sky at Ghoramara

Half the Sky at Ghoramara

It is the last boat of the day, leaving the people of Ghorama who only enjoy half the sky. 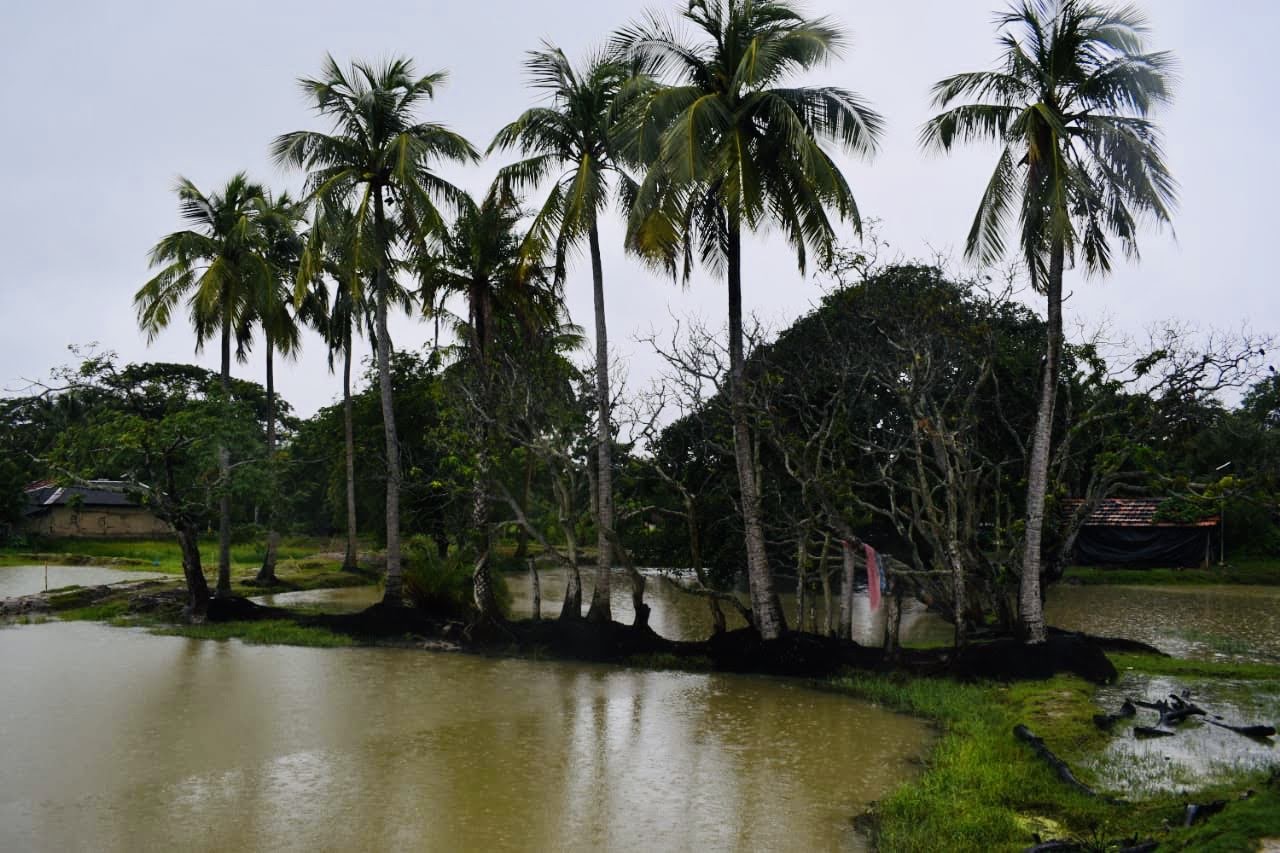 A crowded motorboat with cages of hens, goats, tourists, students, men and women, stream through the backwaters of Ghoramara Island, a shrinking island in the bay of Bengal. Every day these locals visit Kakdweep, for the sake of their basic needs for getting food, education, jobs, post office or even fuel.

As I stand at the corner of the little island, everybody else eagerly awaits to get on the first boat, so that they can quickly get back home. The motorboat only comes thrice a day, if you miss one boat you have to wait for hours before you can get back to your family.

Malini is a daily wage worker pulls her saree together, gets on this ragtag boat and takes the treacherous 30-minute journey on an early 20th-century boat. The conductor of the boat screams as people as he keeps shoving people forward, to make room for as many to sit. Even though the island is close, the crowd that sits on the edges of the boat makes anybody sitting on the boat almost invisible in the crowd. Each individual is reduced to a headcount.

The boat pulls into the muddy bank of the island. The navigator and conductor throw a wooden plank that makes the platform for people to hop off from the boat. Malini is barefoot and the drizzling rain drenches her red saree as she doesn't have an umbrella. The boat travellers get off one after the other jumping off in coordinated synchrony. They slowly disappear under shrubs that dot and covers the island. A narrow muddy road leads people to inside the island. 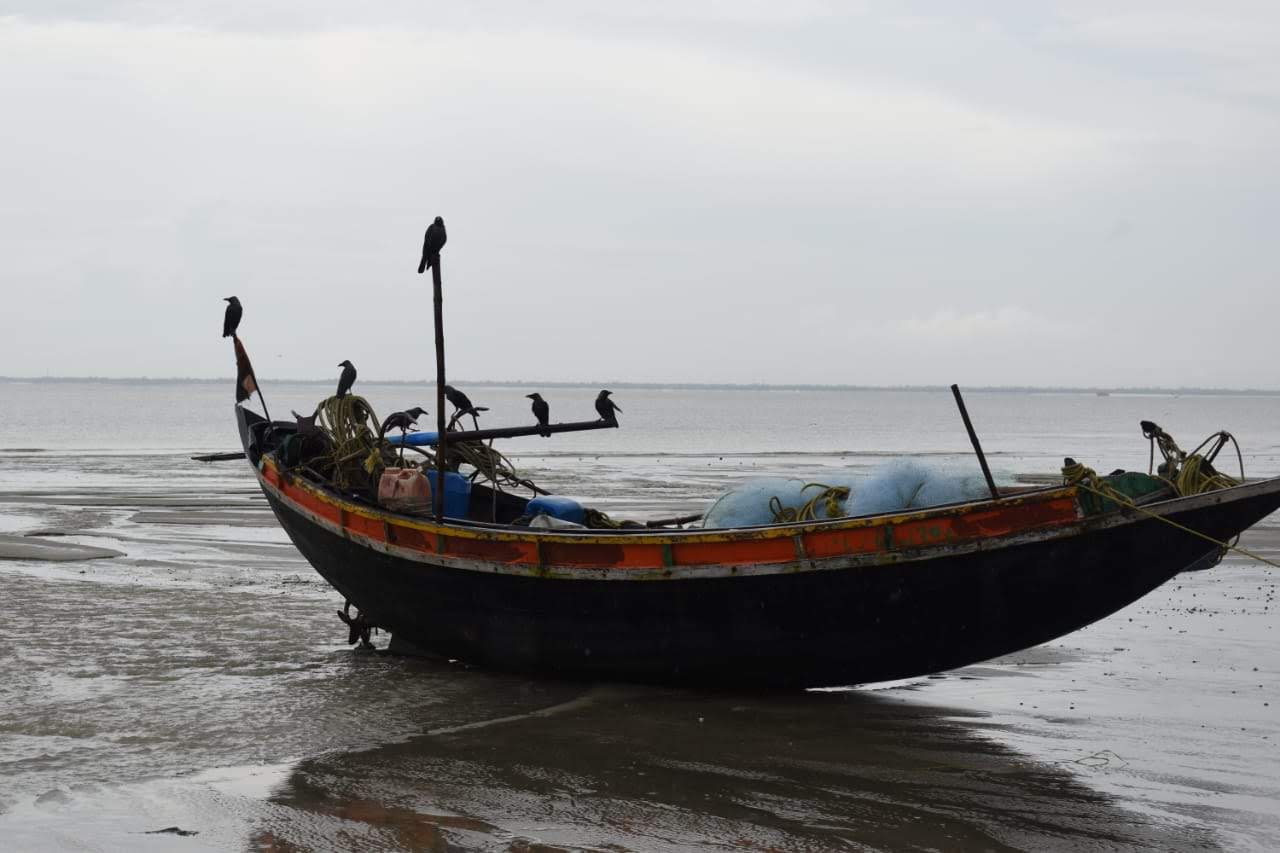 Tourists throng these villages to get sightings of the Royal Bengal Tiger. Many ask villagers to tell them where they can possibly see them, but most face a blank bewildered look from the residents. The boat ride to seek a viewing of the Royal Bengal Tiger is a tourist trap that many have fallen into. But in spite of that just because of the tails many throngs from all parts of the world in the hope to get a sighting. The locals are poor, their huts are mostly broken and shattered but they concentrate more on the immediate need to gather food and earn a living. A finished home won't last too long in the ravages of the rain that slash these hatched roofs on a daily basis.

Old fishing nets are thrown on the roofs and sometimes just stored there so that they don't get tangled inside their house. The huts are dark and musty with small doors. People bend down to enter the door. Their staple food is paddy, they plant water-resistant crops that can take the drowning for days but many crops still don't survive because of excessive salt making its way to the land and destroying the future usability of the land. They have moved many times to find new small patches of land which are not being cultivated. So they put very little in one place, because they may have to move from one location to the other after a heavy downpour or because of the flood. 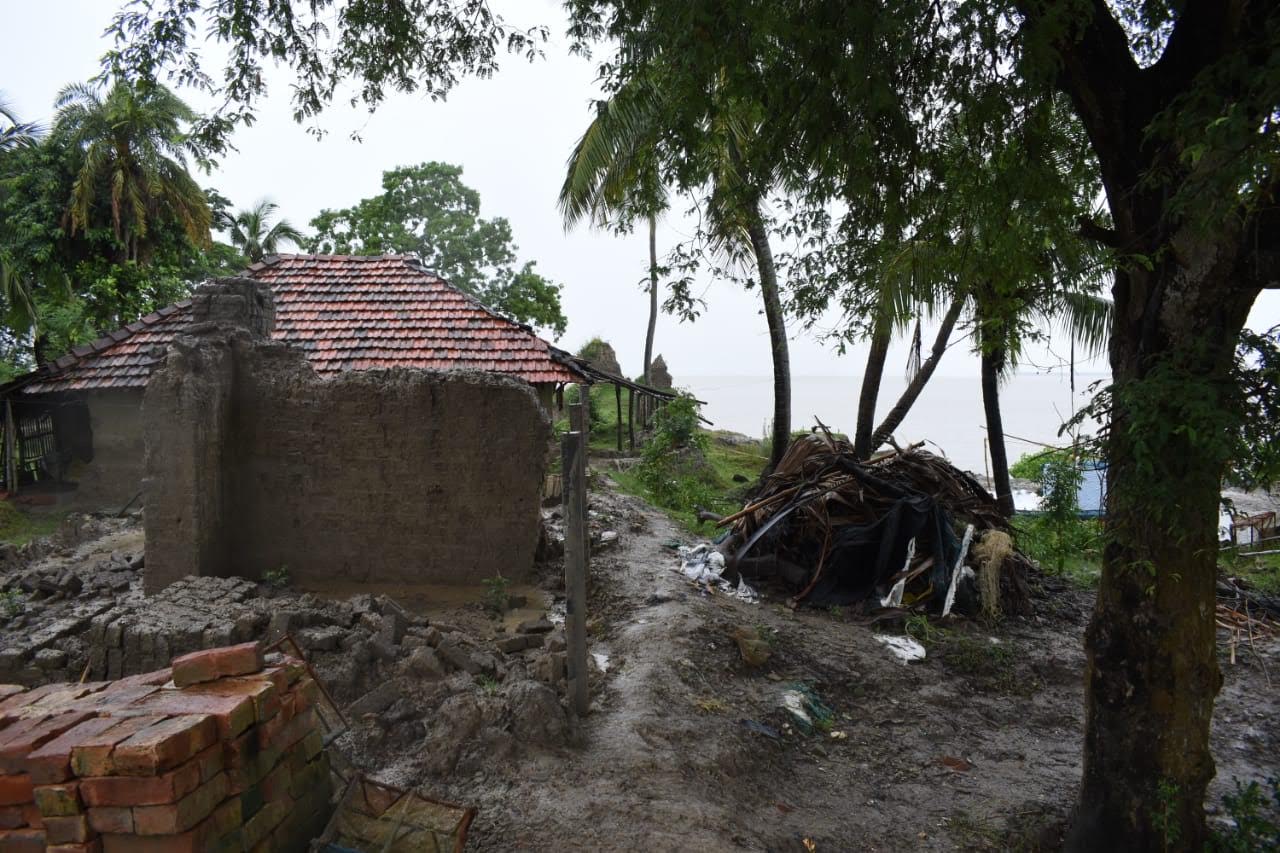 The only paint job many huts have are political advertisements. The paint has been given by the parties both in power and opposition. A small dispensary is in tatters and a doctor barely makes his way. There isn't a way for anybody to check on the attendance and the salary is pocketed by the doctor as he runs a thriving private practice at the expense of the taxpayer. The local school is free and is till Grade eight. Secondary or high school is only available at Kakdweep.

Jagol (30), a rickshaw man takes us for a ride through the village as we explore the nooks and corners. He explains that for the ones who don't have much in savings are stuck here," there's no escape left for us, there's no place left, people those who can afford, are leaving Ghoramara and settles in Kakdweep and those who can't are saving money so that they can buy a piece of land in Kakdweep ". Jagol who is a bit of a tourist guide takes us to a house of an old lady lying on a bed, with her eyes wide open, gazing at the visitors. The walls of her house have soaked in rainwater, and water is slowly dripping from its roof, just beside her bed. She is not sullen, seems habitual of the water. We ask her name but she doesn't respond, her neighbour walks in and tells her sad story of being abandoned by her son when she decided not to move to Kakdweep with him. She had decided to stay here and was making do with her broken hut, a place where she has spent all her growing years after her husband brought her here when she was 13. She doesn't complain about anything or anybody. She has no anger on the sea or the government or with the politicians, and not even with God.

Jagal tells us that this is one of those places where no politician physically visits. In the election season," it's a place where politician and Government's helicopter never really lands, they visit us and we see their hand waving at us in the distance, a hand that is supposed to reassure them that they will come one day and make some changes. But all it offers is false hope. Their only support a wooden boat, when in an emergency their island begins to drown. The boat is their last straw when faced with an emergency, they take the heights and when the flooding ends return to whatever is left of their home and sometimes there is nothing and they move on to build a new home. As we ride along the rugged road, we see a group of children walking tip-toeing through the muddy path. Their heads are covered with plastics, they cover their books with old plastic packets. We walk alongside two 8-year-old girls and we get talking to them. We ask where are their parents. They tell us mom is home, cleaning and cooking and dad is out in deep-sea fishing ilisha, a local delicacy. Jagal explains how male members of each and every family in Ghoramara, leaves the place for at least three or four months and sails the high sea for the sake of making a living and sending money for their families. 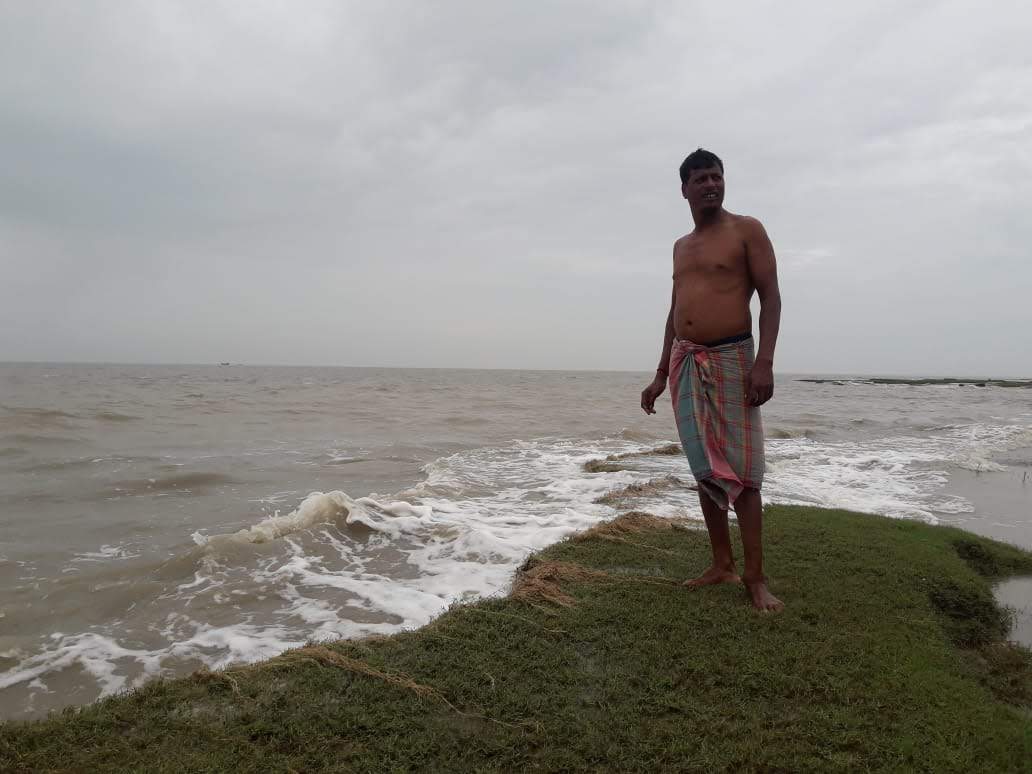 Every year there are giant like ships that come and park along with the islands and offer workers jobs, the ones who need the money get on these ships and are not seen for months. The high seas are a risky affair. Some make it back and some don't. But what choice do they have? While the men are away, the women go fishing for the smaller catch, with their bodies half-submerged in the water they cast their nets and pull in the fish. Some pulls reap rewards, while some just go empty. But they cannot go home until they have enough to feed their children.

While returning to the village we meet Mr Muhammad's family who lives nearby the bank of Ghoramara. We ask him that why he didn't visit the sea this year for fishing, he replies "it's not safe leaving your family behind, because of the whole NRC issue we are constantly threatened by the police. We may return after months and are families may already have been arrested and sitting in a facility. "So this year I decided to not go deep sea". He tells us about how they are unhappy about being on Goramara and are hoping to find a new island to settle on.

As we get ready to make our return journey we sea the motorboat struggle through the water as it makes its way back in the low tide. The boat is waiting for a high tide so that it can turn on its engine and the fan and the rudders can then be activated and to their job. As the sun sets, it leaves a red and orange stream of rays that break through the clouds. The edges of the redness have a ring of crystal around it.

Finally, the boat arrives and we settle into the boat. It is the last boat of the day, leaving the people of Ghorama who only enjoy half the sky. As we arrive in Kakdwip we see that while the Island of Ghoramara is only a few kilometres as the crow flies, but the ability to cross and settle on the brightly lit town is a long journey for many. The bustle of the town takes over and the silence of Ghoramara may have drowned but it will stay etched in my memory for a long time to come.

A writer who travels to hunt untold stories by exploring lives out there ..