Capitol Building Breach "Shocks" but Fails to "Surprise" Most Americans

Few Americans were surprised by Wednesday's attempted coup, perhaps because White grievance is woven into our collective, if often unacknowledged, national memory 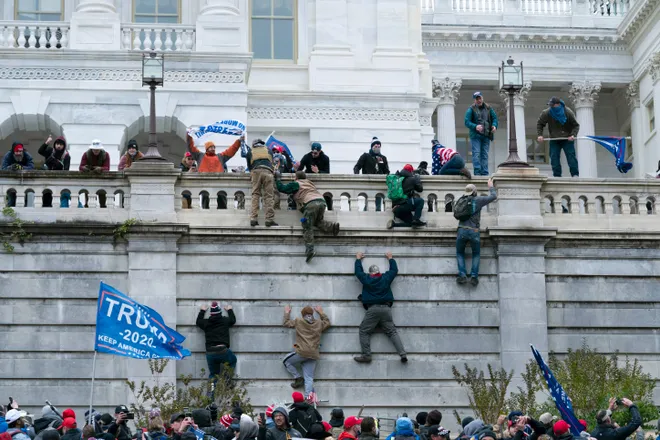 UNITED STATES. Washington, DC: In the wake of the Capitol Building takeover while Congress was certifying the Electoral College results for the 2020 Presidential Election, a common refrain has been repeated: "We're shocked but not surprised." But why are we not surprised?

What happened on 6 Jan, at least on the surface, should be surprising. A relatively unorganized and untrained group of insurgents was able to breach the halls of the Capitol Building of the most militarily powerful country on earth for the first time in its history. A 20-year veteran of the Treasury Department told Democracy News Live that during his decades' long tenure, he was never allowed to enter the Capitol Building without identification even though he was well-known by security personnel. And yet, the chorus rang out, "We're shocked but not surprised" that armed militia easily entered one of most closely guarded federal buildings in the United States.

Coup attempt is a reverberation of historical White sovereignty

The events of 6 Jan, while unprecedented, are an echo of suppressed White rage from America's genocidal origins. Right wing movements share a common goal of achieving power by seizing upon the anxieties of the downwardly mobile. If past is prologue, drawing a through line from the Civil War to Wednesday's coup attempt can reveal that even after Trump is removed from power, we should not be surprised if we witness further insurgent attempts by White supremacist groups.

After the Civil War, the confederate cause was channeled into insurgent movements such as the Ku Klux Klan (KKK). The era following reconstruction represents a catalogue of various means by which the racial caste system could assert itself amidst the abolition of chattel slavery. In Roxanne Dunbar Ortiz's book Loaded, she explains how disenfranchised White Southerners formed the substance of the romanticized western outlaw myth, constructed largely from the dregs of their grievances.

Similarly, one critically under-discussed element of the Second World War is the Nazi Guerilla Movement that took place from the closing months of the war and into subsequent years. The Werewolf Program trained several thousand Nazi soldiers in guerilla warfare tactics. The Nazi ideology survived beyond the end of the war and manifested in an insurgent terrorist movement that can be observed today, even within mainstream American culture. While overshadowed by the advent of the Cold War, many historians believe that the denazification program was cut short prematurely to direct resources toward countering Soviet influence in the region. It is possible to hypothesize that this foreclosure led to the proliferation of the far-right ideology in Europe.

Historically, a parallel can be drawn between the Confederates and the Nazis in their common dedication to preserving a racial caste system. Each of these movements presents a dominant pattern where a majoritarian above-ground movement is succeeded by smaller yet still dangerous underground movements. At this current moment, in the full light of recent events, it behooves those concerned with social justice, equality and human rights to examine where these historical patterns might manifest once again. Much ink has been spilled about the parallels between Trump's right-wing acolytes and fascist Europeans. Today we should start asking what happens when an above-ground fascist movement is pushed to the margins and beneath the surface once again.

One of the most startling observations from the events of 6 Jan was the tepid law enforcement response. The summer of 2020 was characterized by thousands flooding streets across America in solidarity with Black Lives Matter protests against police brutality. Protesters were tear gassed, struck with rubber bullets, and subjected to a military-style response to their First Amendment rights of free assembly. Protesters were met with these offensive tactics for breaking curfew, for refusing to disband after an "unlawful assembly" was declared, and for attempting to hold their positions against a wall of police in riot gear, backed up by weapons and armored vehicles.

And yet, among the most astounding pieces of video captured by the infiltration of the Capitol Building was law enforcement removing metal barriers onto the Capitol grounds within minutes of Trump completing his 70-minute speech on the White House lawn. Trump urged his supporters, "We fight like hell and if we don't fight like hell, you're not going to have a country anymore…We're going to the Capitol and we're going to try and give…we're going to try and give them the kind of pride and boldness that they need to take back our country, so let's walk down Pennsylvania Avenue."

After law enforcement removed the metal barriers, an estimated 40,000 Trump supporters engulfed the grounds as a small handful of Capitol Police tepidly tried to hold hundreds back as they pushed into the Capitol Building itself. These domestic terrorists, wearing "Make America Great Again" (MAGA) accessories, clothing with Nazi symbols, and waving Confederate flags, were filmed smashing windows, breaking wooden doors, and freely roaming the halls of Congress, vandalizing representatives' offices and disrupting the convening of the Congress. Members had to be evacuated to secure locations and the Electoral College proceedings were halted.

The FBI and the Department of Homeland Security (DHS) have deemed White supremacist groups as the largest threat to domestic security, according to a recent article in The Guardian. A direct link to law enforcement has been documented by a former FBI special agent, Michael German. This acknowledgment is a welcome footnote to a body of knowledge long-held by Black Americans for decades.

Law enforcements' disparate responses to Black bodies protesting for their human rights versus White bodies attempting a coup to express their grievance over a legal (but in their eyes, illegitimate) election result must be called into question. An overall lack of law enforcement accountability can be understood clearly within the framework of far right and White supremacist ideology. The Washington establishment was well aware of the threat leading up to 6 Jan; conscious decisions were made to ignore the "protest". White terror does not threaten the US because White terror is the foundation upon which the US is built.

The events of yesterday did not come as a surprise to many Americans (and certainly not to foreign observers) because awareness of America's racist history is infused in our collective memory, even though rarely acknowledged. Therefore, we should not feign shock when the echoes of White supremacy will be heard long after Donald J. Trump is finally removed from power.

Interested in all topics with a focus on the intersections of science, politics, and philosophy.