One party is concerned about the present, while the other has an eye for the future 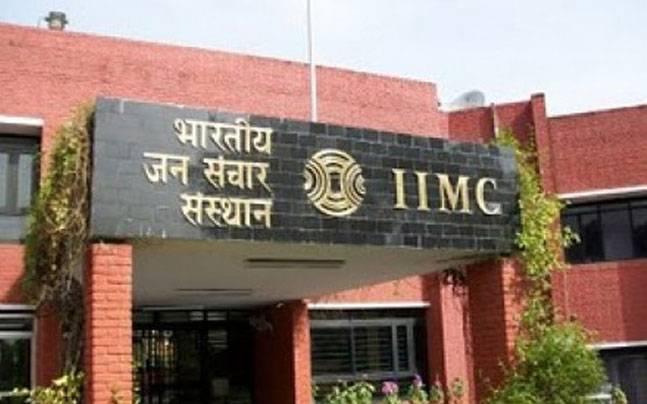 Indian Institute of Mass Communication situated in the campus of Jawaharlal Nehru University is considered the premier institute for journalism in India. It is an autonomous body under the Ministry of Information and Broadcasting, and provides post graduate diploma in journalism, advertising and public relations. Unfortunately, the 'Private-relations' of the institution went public when the students of IIMC staged a protest on February 2nd.

Although this is not the first time that IIMC has witnessed protests by its students. Last year in May, the students expressed their displeasure when Director General of IIMC, Mr K.G Suresh invited former IG of Chhattisgarh's Bastar, S R P Kalluri. Back then students vehemently opposed the 'invitation' but this year one party of students has censured the institute itself, while the other is protesting to save its future.

The institute has witnessed some high-voltage drama over the course of the week, with an ambulance taking students on a hunger strike to Safdarjung hospital, Fast Response Vehicle of cops keeping an eye on the protest and media organisations being barred from entering the premises. 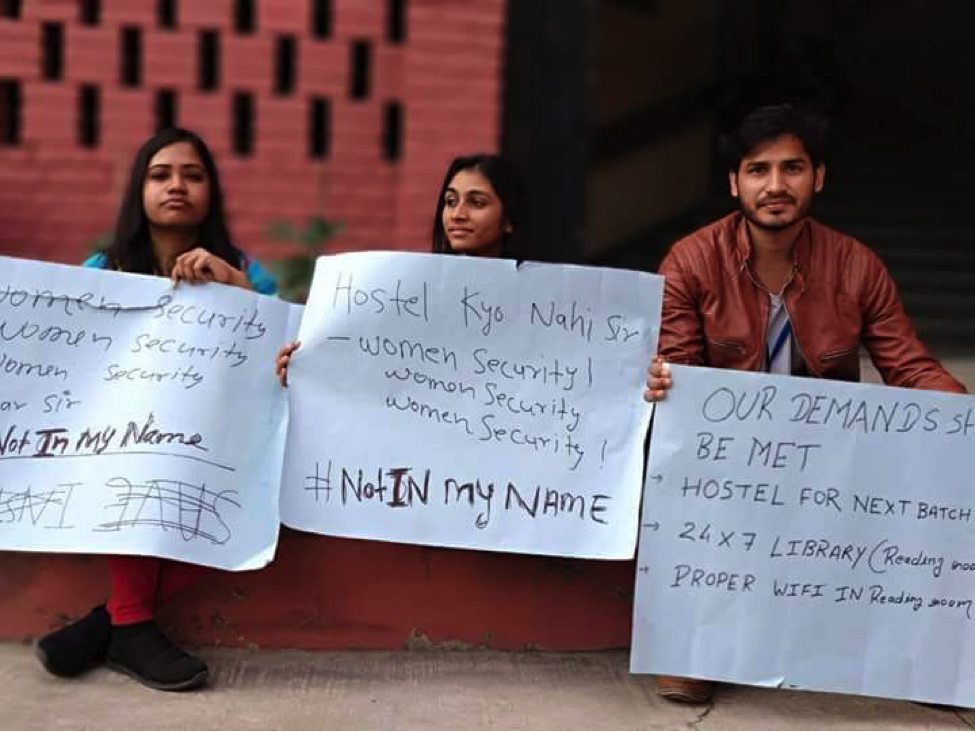 The group which initiated the protest last week is now on an indefinite hunger strike, demanding hostel facility for male students of the next batch, round the clock access to the reading room with good internet connectivity, and library timings to be extended till midnight. Currently, the library is open till 8 pm on weekdays and 5 pm on Saturdays. Students protested with placards reading #NotInMyName and #WeNotRapists.

Since the beginning of the academic year, outstation male students have been raising the demand for a hostel. The previous boys hostel is now converted to girl's hostel. The building can accommodate 47 students but is occupied by only 21 female students at present – with most of them being Delhi residents only. The rationale provided by the administration behind this move was "women security" and increase in number of outstation women in all the PG Diploma courses. A student of Hindi Journalism course says, "Reality is [that] there is a decline in the number of outstation female students from 129 last year to 115 this year." 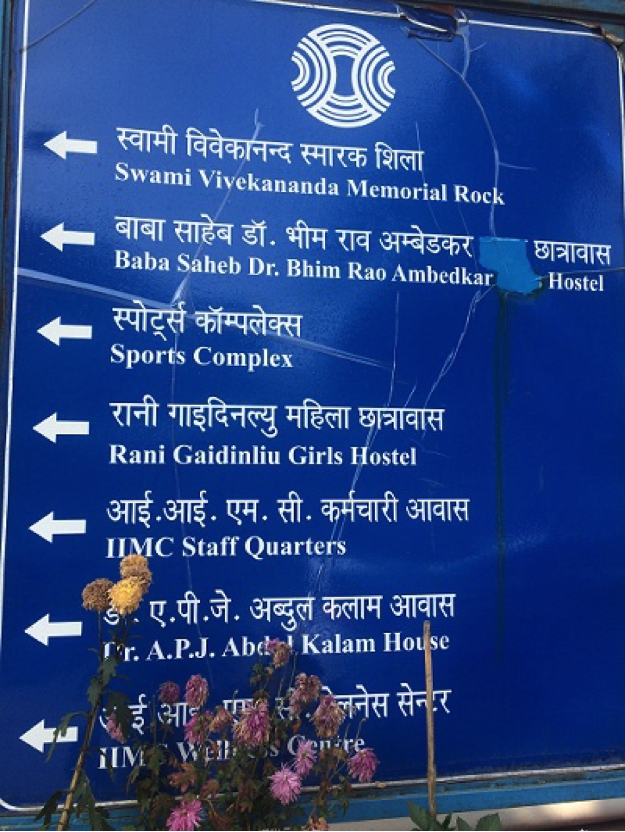 Outstation male students are compelled to spend hefty money in rented accommodations outside the campus. One of the students, on grounds of anonymity said, "It is clearly mentioned on the official website of IIMC (http://www.iimc.nic.in/content/43_1_Hostels.aspx_) that one more hostel for 42 students is under construction, but that's a blatant lie, as we have never witnessed such a development. Besides that administration keeps on saying that it isn't getting the permission from National Green Tribunal to chop down the trees and construct a hostel."

The course began in August and since then, the students have held a lot of meetings, signed multiple petitions and submitted numerous applications. Shyam Singh of Hindi Journalism said, "Akhir hum kyun majboor huye? Pata hai hum 6 applications de chuke hai." (Why we were compelled to this? Do you know we have already submitted six applications.) 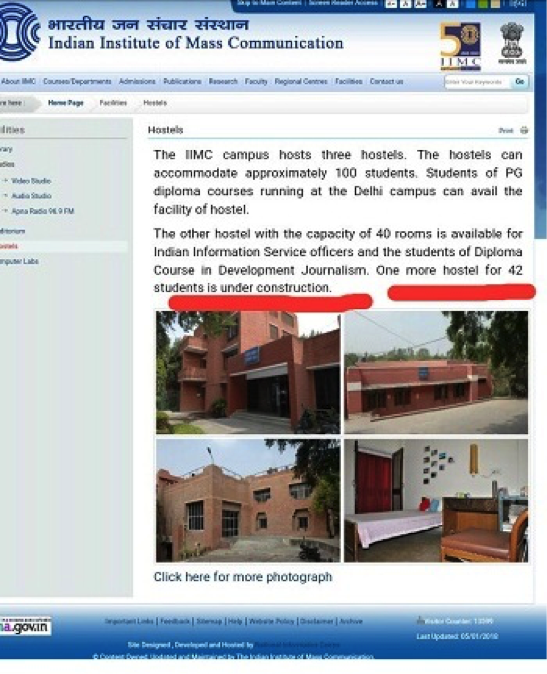 Murari Tripathi, a student of Hindi Journalism, expressed his resentment over poor connectivity of wifi in the reading room. When asked what the fuss was over, since the whole campus is wifi enabled, he cited "poor signals" as the problem. He also said that their group has demanded an extension in the library timings and round the clock access to the reading room. He added that the "administration has got ample money to put up a camera hovering over us within hours to take our surveillance but they do not have enough money to make the reading room wifi enabled."

Matter with code of conduct

During the time of admissions, the students were made to sign a code of conduct, declaring that they will neither speak nor write anything against the institute on social media, but Shyam Singh said," the code of conduct is fundamentally incorrect as it violates Article 13 of Indian Constitution {The State shall not make any law which takes away or abridges the rights conferred by this Part and any law made in contravention of this clause shall, to the extent of the contravention, be void} and it also violates article 19(1), which provides freedom of speech and expression." 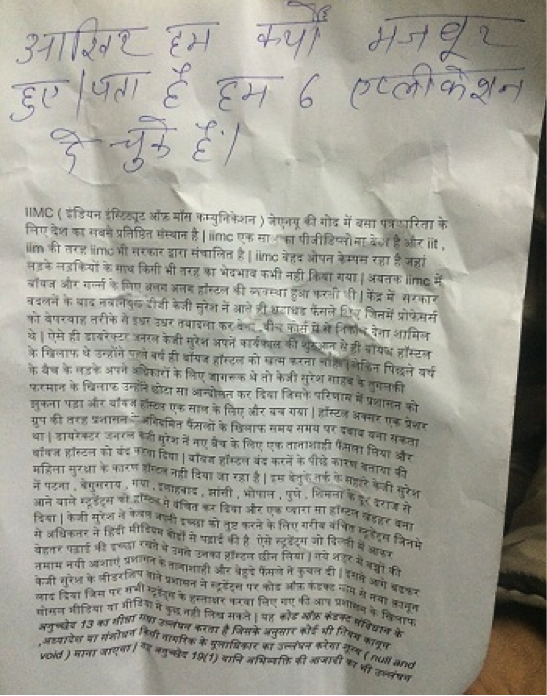 Subsequently, this party said that it had tried everything but was left with Hobson's choice, with protest as the last resort.

For a week, these students had been protesting against the administration single-handedly. This led to a few students having apprehensions that such protests might affect the credibility of the institute and pose a hurdle during placements scheduled in March-April. Taking this factor into cognizance, this party has started protesting against the former one. They have also accused the leaders of the other party, Shyam Singh and Mandeep Punia, of political motives and dissemination of propaganda. 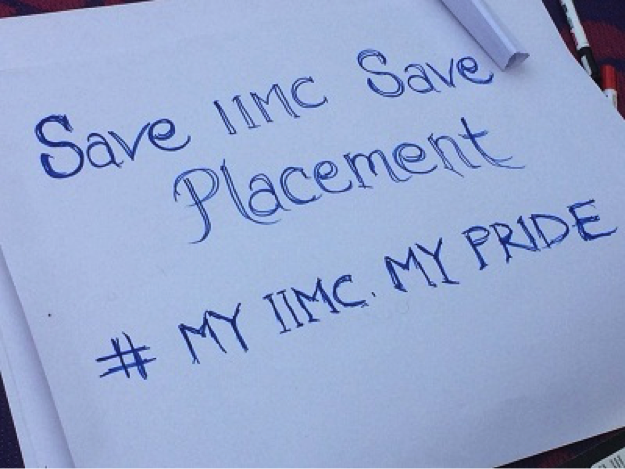 Students of both the parties sat on protest in front of the main gate of the college. The first party did a Facebook Live showing how the guards were not allowing them to enter the college for using washroom. In the video, the students can also be heard mockingly saying, "At least let us pee, we don't promote open defecation or urination, this is against swacch bharat mission of Mr Modi."

The second party also made a video in which they showed how the members of the other group were meeting outside-elements, who were indoctrinating them to further intensify the protest. A man standing on the other side of the entrance gate can be seen in the video suggesting tagging I&B minister Smriti Irani in social media posts on the protest to make it viral.

Both the parties exchanged hot-words, used placards as rebuttals and remained rigid on their viewpoints. Rightly, it has been said, "our existence, is resistance"

An attempt by administration, gave sigh of relief

The unrest, lasted for a week, protesters turned pale and fragile, doctors and physicians frequented the campus but it was the administration which put the full stop. Director General, Dean of Students Welfare and professors gathered in front of the college and accepted the demands of both the parties. A circular was issued and fulfilment of demands became official. 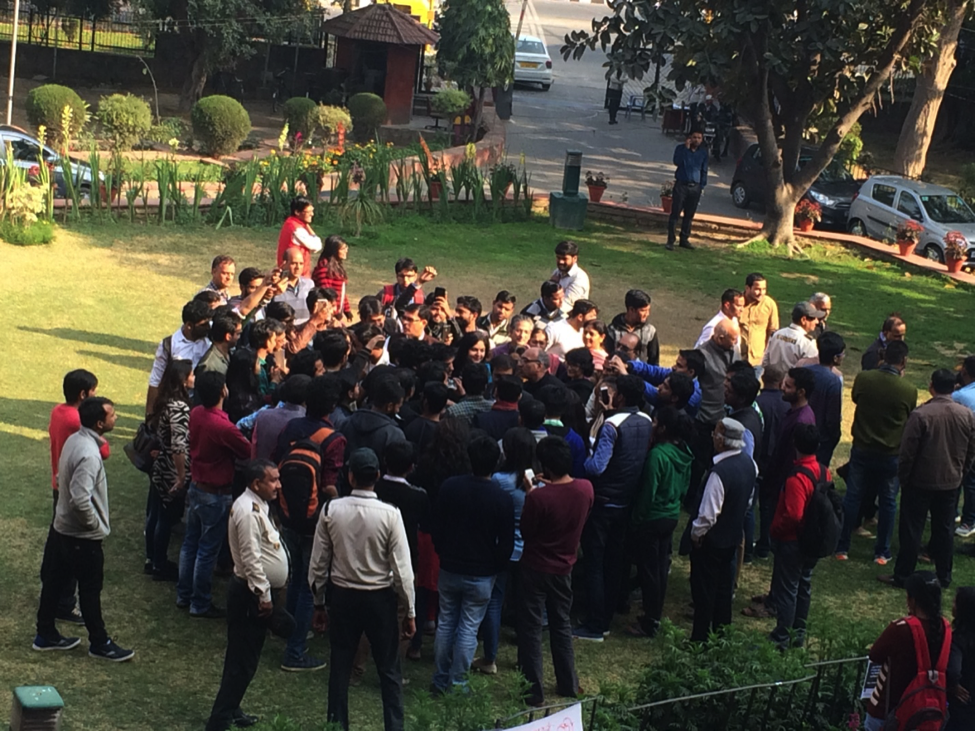