Report News
Home > Editorial > Voice of the People > "I was a bird. My wings are broken now." says acid attack survivor

"I was a bird. My wings are broken now." says acid attack survivor 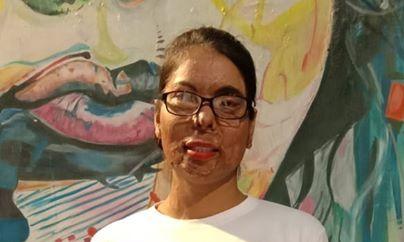 Rajneeta is from Meerut. His grandfather was the 'Mukhiya' of her village. Being the head of the village, he attracted many enemies. She recalls the day when she slapped a boy who was constantly stalking her because of his enmity with her grandfather and father.

About 6 months later; on 16th November 2013, Rajneeta was on her way home from college, the boy hurled acid on her face. For Rajneeta, her life was finished. "Mai udti hui panchi ki tarah thi. Mere pankh toot gaye." (I was a bird who used to fly with freedom. My wings are broken now), says Rajneeta. Life without dreams and ambitions is not worth. She also wanted to be a fashion designer. After this unpleasant incident, her dreams were shattered.

"I used to cover my face whenever I walked out of my home,'' she says. But, her father did not let her cry in distress and took her to various cities for her treatment. After undergoing several surgeries Rajneeta got back her vision which she partially lost in the attack. Currently, she is working in SHEROES Cafe, Lucknow; only cafe in India which is run by acid attack survivors.

Our society expects women to look a certain way. This is also one of the major reasons why the perpetrators commit such a heinous crime. The motive of attackers is to destroy the face, image and consequently the self-worth of a person. Rajneeta smashed the motive of attackers and chose to look beyond these scars.

As per Acid Survivors Trust International (ASTI), 80% of acid attack victims are women. When the acid is thrown on the face, eyelids, lips and nose may burn off completely. The skin and bones may completely dissolve. In most of the cases, the vision of the victim is adversely affected, causing complete blindness. With such physical consequences, victims have to undergo emotional trauma as well.

The latest report of NCRB recorded 283 incidents and 307 victims under Section 326A and 326B of the IPC. Both these sections were added after the Criminal Law Amendment Act in 2013. Before this amendment, perpetrators were only charged with causing hurt and therefore inviting punishment of three years only. The worst states affected were Uttar Pradesh with 51 incidents reported and 52 being victims, West Bengal witnessed 54 incidents which were reported followed by Delhi, Odisha, Haryana and Punjab. The most important reason behind acid attacks is the easy availability of acid despite several directions given by the Supreme Court to formulate proper laws to regulate the sale of acid and other corrosive substances.

The Supreme Court has laid down the following guidelines to control the availability of acid:-

a). The sale of acid is completely prohibited unless the seller maintains a log/register recording the sale of acid. All sellers shall sell only after the buyer has shown:

After all these guidelines and rules being laid by the honourable Supreme Court, some questions still persist; Is this enough? How much of this is being taken care of? Who is at fault?

Rajneeta and every woman who has faced this are still waiting for justice and answer to all these questions. While we are still thinking about these questions, somewhere a life is being destroyed; the dreams are being shattered!