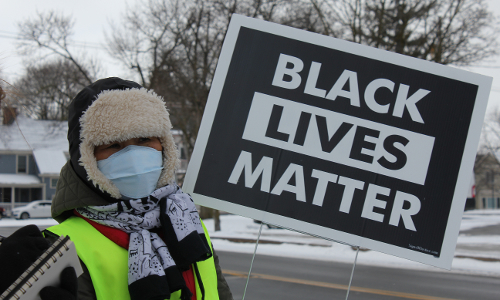 The organizer of this weekly vigil, Ock Hee Hale, is a member of Elders and Allies, a Black Lives Matter support group comprised of community elders. In the wake of George Floyd's murder at the hands of Minnesota police officers, the public became unable to turn their eyes from a very uncomfortable fact about American society: Black people's lives are more often threatened when they interact with law enforcement.

Tapes of a naked Black man pinned to an icy Rochester street under the knee of a police officer surfaced nearly 4 months after the man's death. Daniel Prude's murder while in the custody of four Rochester police officers enflamed sparks that had been flickering across America. The cry to "Defund the Police" was ignited in Western New York. Protests continued for months.

According to multiple eyewitness accounts, protests in Rochester started with a few hundred very peaceful protesters. Protesters' chants and traffic-blocking were met with offensive actions by the police: tear gas, pepper bullets, and flashbangs. By the second night, hundreds more had joined the protests; estimates of 1500 were reported. The police moved in, and again, tear gas, pepper bullets, and flashbangs were used against the chanting marchers.

Mayor Lovely Warren approached a respected pastor, Rev. Myra Brown, and asked if she would be willing to gather a group of elders to help calm the tension at the protests. She agreed, but Warren faced widespread criticism for her decision. By the third night, a small group had formed. Allies and Elders was initiated by long time civil rights activist, Shirley Thomson, and Kit Miller, Director of the Gandhi Institute and Rev. Brown. "We've asked them to not fire on the protesters, to let us as elders manage the crowd," Brown said. "I think if we are the front line, I think we can manage things" (Spectrum). Their hopes dissolved. The Rochester Police Department (RPD) again launched weapons on an increasingly angry crowd. Night four, 100 Elders and Allies stood on the front lines again. Under increased public scrutiny, Mayor Lovely Warren finally told her officers to stand down.

Free the People ROC's demands not yet fully met

On Sept. 8, 2020, the police chief and entire command staff resigned. Free the People ROC organized the marches and made their demands clear. While this was one demand met, several more remained, chief among them, a reallocation of police resources into providing a mental health professional to accompany officers on emergency calls. The police were called to assist Daniel Prude by Prude's brother, Michael, because Daniel was having a mental health crisis; he feared his brother was going to hurt himself. Daniel died in the hospital from complications from asphyxia while he was in police custody. The medical examiner ruled it a homicide.

A group of women meet to meditate. One of the women, Jane Ballard, feels called to honor all the Black lives that had been lost to acts of police violence. They decide to plan a memorial service. Ock Hee Hale supported the planning of the event. "We grieve through ritual. All of us. Black, brown, white." More than 200 people attended the peaceful service in Rochester on Oct. 9, 2020. "We made 150 programs. I only have the original I can show you," she said, so pleased they had run out.

On Oct. 10, Hale started carrying a Black Lives Matter sign near the corner of Main and Monroe, in the heart of the village of Honeoye Falls, a community of 3,000 residents where fewer than 1% are Black.

As "Black Lives Matter" signs began to dot the front yards of concerned citizens throughout the Rochester region, Hale was upset. "I'm a Buddhist. I believe that all lives matter, all sentient beings matter. I didn't understand."

"All lives matter" became a rallying cry from many in the community. For some it came with good intention, like Hale whose belief in the equal worth and value of all people informed her ideas. For others, it became an easy way out, words spoken that permitted ignorance of the systemic racism at the root of police violence. "I did not understand," Hale admitted. "Until Black lives matter, as long as Black lives are at peril, all lives don't matter."

Hale prepared herself to learn. "I had to learn-what do Black people prefer-not what I thought was best. I was ready to receive."

She began to read many books. Among the most influential to her were, Begin Again by James Baldwin, Waking Up White by Debbie Irving, and How to be An Anti-Racist by Ibram X. Kendi. Her friendship with Shirley Thomson and a burgeoning awareness of the depth of systemic racism both changed and moved her.

Born in South Korea, Hale shared her thoughts about the 1980 Gwangju Uprising, a student-led protest against the imposition of martial law. More than 2,000 protesters died, were raped, or injured at the hands of government officials. "In 2016, more was done with candlelight than with violence," she said, referring to what became known as the Candlelight Revolution. Protesters held daily candlelight vigils from October to March against a corrupt president. Protesters numbered in the millions. The president was impeached, removed from office, and a human rights attorney took office.

"I am committed to nonviolence," Hale shared. While hundreds attended the large protests in the city in the late summer and early fall, Hale chose to find another way to show her solidarity with Black community members and those across the country who have been wrongfully harmed by law enforcement. Her weekly vigil is an expression of her commitment to racial equality in Rochester and throughout the country.

At 71 years old, Hale is cautioned by her son to be careful. "It's the middle-aged white men that scare me the most," she said. "Since I have been doing my quiet vigil, they are the ones who roll down the window and shout, 'GO HOME!' or 'N-(expletive)-LOVER'."

"I will continue this vigil until the end of my physical strength or we have racial equality in this society. I will know this has happened when people stop shouting at me from their cars, Hale said.

A white middle-aged man slowed, rolled his window down, and through the frozen air, yelled, "Thank you for what you're doing." 47-year-old Will Wagner returned with hot coffee and donuts. Hale said, "Since the Capitol riots, there is a shift. This is the first time a white middle-aged man stopped to offer us encouragement. That's a good sign."

We spoke tonight; Hale's heart heavy with renewed grief. Protests have ignited once again in Rochester as another video of police brutality surfaced. This time, a nine year-old Black girl was handcuffed and subdued with pepper spray while in the back of a police car. Officers were called to a "family dispute." Nine officers were involved. Some have been suspended with pay pending investigation.

"We have a long way to go," Hale sighed.